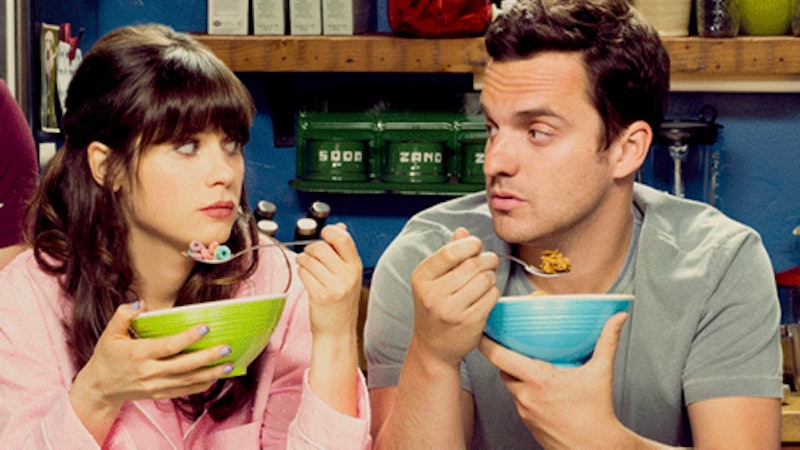 True Americans, how are you handling Nick and Jess’s breakup on New Girl ? I’m taking it a lot like Schmidt did: Not well, but should we really worry about Nick and Jess' future as a couple? In the world of TV lovers, Mr. Miller and Miss Day are obviously the Ross and Rachel of the show: Destined to end up together at the end of the series, even if we have to see them date a whole lot of other people in the meantime.

From their first meeting when Jess moved in to their passionate first kiss in the hallway of their apartment, we’ve seen their relationship go from totally platonic to one of our favorite TV relationships. And after how long I waited to finally see them together, I’m not about to give up on Nick and Jess now.

These two are are meant to be, and here’s why:

Nick has loved Jess since the day they met.

Jess moved into the apartment when she and Nick were dealing with similar relationship probs. Nick was trying to get over his on-again, off-again girlfriend, Caroline, and Jess was stuck in the Dirty Dancing-themed emotional rollercoaster after she’d recently been dumped by a douchebag so terrible we don’t even remember his name. But like Nick eventually told Caroline, he “fell in love with Jess the moment she walked through that door.” Dorky glasses and all.

Love at first sight? So real for these two, and definitely worth fighting for.

They had to overcome a lot to be together.

Messy romantic entanglements, worrying about what their roommates might think, living with Schmidt in general: Nick and Jess have certainly had their share of hoops to jump through in order to make their relationship work. And once it did? Magic. I’m convinced they can find this magic again. Nothing worth having is easy, people.

They’re way too perfect for each other to find better matches elsewhere.

After all, who else could find Nick’s grumpy old man attitude and turtle face adorable besides Jess? Her fun, light-hearted personality perfectly balances out Nick’s natural pessimism, and they make each other better people. Which obviously means true love. They think they don’t have anything in common, but they’re wrong. In ways, they’re each other’s polar opposites — and you know what they say about opposites.

They need to grow before they come back together — but they will find a way back to each other.

Nick Miller’s been a major work-in-progress for the entire history of New Girl. He means well, and he’s definitely made huge steps toward, you know, actual adulthood since we first met him. He has a bank account, so that’s a step in the right direction. But it shouldn’t be Jess’s job to help him grow up, either — that needs to be all Nick. And once he’s become the fully formed individual he wants to be, they’ll try again and discover that in the future, they finally want the same things. That’s what I’m hoping, anyway.

They’re helping each other through their breakup.

That “goodnight, honey” from Nick at the end of last week’s episode? It just about broke my heart.