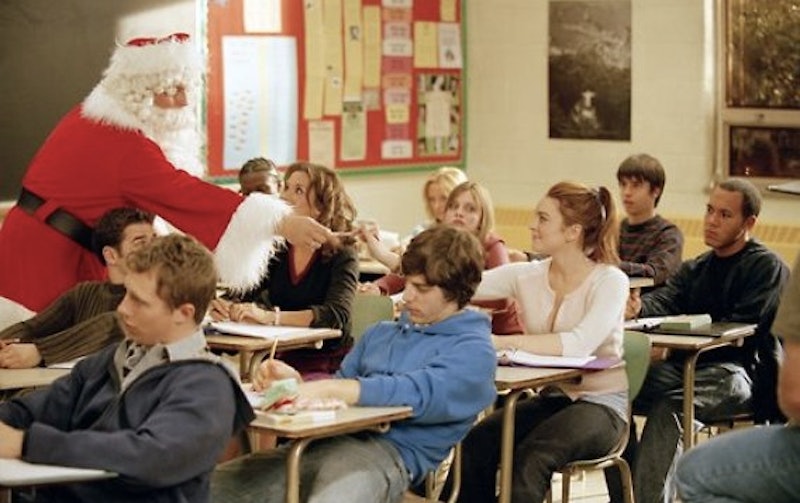 Sometimes, when you're feeling low, when you need inspiration to get on with your day, when you need a little something to get you out of bed and put your pants on, you might think to yourself, "You go, Glen Coco." The fictional receiver for four, yes FOUR Christmas candy-grams from Damian-a Clause in Mean Girls has become a symbol of hope, success, and striving for our dreams. Ten years after film premiered, Glen Coco still lives on in our collective cultural consciousness. He has turned the humble candy cane into a scepter of self-fulfilment and zen. On the 10th anniversary of Mean Girls, we thank YOU Glen Coco for being everything that you are.

Lindsay Lohan and Tina Fey have recently dropped a few hints surrounding a Mean Girls reunion. As happy as we'd be to see Cady, Damian, Janis, The Plastics, and Mathlethes back together, it wouldn't feel complete without the one and only Glen Coco. He may have only appeared in the film for a brief moment, but oh what a moment it was. Without Glen Coco, how would Gretchen Weiners ever been pushed to snap against Regina? How would the plot to ruin the life of the ultimate Life Ruiner ever come to fruition? Truly, we have Glen Coco to thank.

In honor of Mean Girls hitting the big 1-0, here is everything you need to know about Glen Coco:

1. The actor who plays Glen Coco is David Reale and was actually uncredited (gasp!) for his role.

2. He appeared again with Amanda Seyfried in 2009's Chloe.

3. Cady isn't the only out-of-towner, Reale is Canadian!

6. He's also appeared in a slew of television series including Queer as Folk and Skins.

7. He has an Urban Dictionary Page

And it reads, "A teenage boy who either has many friends or has a very deep relationship with himself. He recieved 4 mysterious candy canes during the holiday season and has yet to inform us all who they are from. "

8. He also sits in front of Gretchen Weiners when she declares that we should TOTALLY STAB CEASAR!