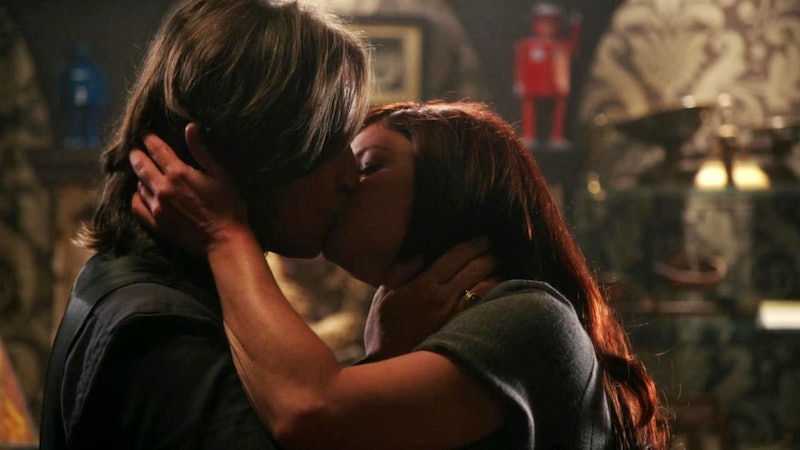 Against all odds (and other fans), I cannot get behind Once Upon a Time's Rumple and Belle. When I love a TV couple, I have a tendency to ship them really, really hard. I was one of the small-but-vocal Dair shippers when Gossip Girl aired. I defended Damon and Elena's relationship to any and every Stefena shipper I could find (before eventually jumping off ship because, hey, every fan has her limits). And don't even get me started on how perfect Mindy and Danny are for one another on The Mindy Project. (If you say otherwise, you are either blind, dumb, or have just gone through a bad breakup.)

But while I can rattle off countless relationships that I adore and will ship until their cancellation, there's one 'ship that I just can't 'ship. This is not a very popular opinion amongst Once Upon A Time viewers, but here it goes: I hate Rumple and Belle together. Yeah, yeah, I know. Belle and Rumple's love story is practically a fairytale. (Actually, uh, it is one.) And I think that's the reason why I have such a strong dislike for it. Let's ignore the fact that the weird aging situation in Storybrooke makes my mom ask if Rumple is Belle's dad every other time we watch the show (Belle is the same age as Rumple's son, so it's not a huge stretch) and just go straight to the meat of the matter: Rumple is a beast. Actually, he's the Beast, from OUAT's version of the classic Beauty and the Beast fairytale. The fairytale has been significantly tweaked for the ABC drama's use in its story, but the fact remains that Rumple kidnaps Belle (or, rather, holds her hostage) and proceeds to be a total jerk until she eventually wears him down. Yes, he isn't doing this completely by his own accord (he's got the power of The Dark One, and that tends to make people not-super-nice) but it's still a pretty abusive situation.

(You only need to sit in on one sociology class to have someone point out that Beauty and the Beast is basically a romanticized tale of Stockholm syndrome.)

I'll give the Once Upon A Time writers credit for making the story more complex than the original tale. The inclusion of dark magic (the thing that has the control over Rumple that turns him into a "beast," rather than coward) separates Rumple's actions from that of true abuse. After all, he doesn't have total control over what he's doing, and is very clearly not the same person as he would have been had he not chosen to take on the magic. At the same time, I'm a little tired of the idea of a woman seeing a broken, damaged man and choosing to only see the "good" behind even the most evil of actions. I'm not saying that Rumple hasn't changed — he has, and he's become one of the show's more heroic characters over time — but if I were Belle, I would have ran far, far away before ever giving him the chance to.

That may be cynical, but it's not like this is a brand new concept. Sure, Once Upon A Time may be the most blatant fairytale adaption on TV, but the themes that are ingrained in tales like Beauty and the Beast are not exclusive to them. "Good girls" put up with and attempt to change "bad boys" with their love all the time on TV. Scandal, The Vampire Diaries, even non-romantically focused shows like The Following all have women putting up with bad behavior from their beloved men because at the end of the day, they truly believe that love is the most important factor in changing someone for the better.

Maybe that's not a fair reason to not cheer every time that Belle and Rumple make out on Once Upon A Time, but it's definitely the reason why I'm not very excited about their romance. Once Upon A Time totes that love conquers all, and in many ways, I think that's a sweet, positive message to send out to an audience. However, when love is a tool used to change a destructive, damaged person, perhaps we should think twice about making it the only solution.