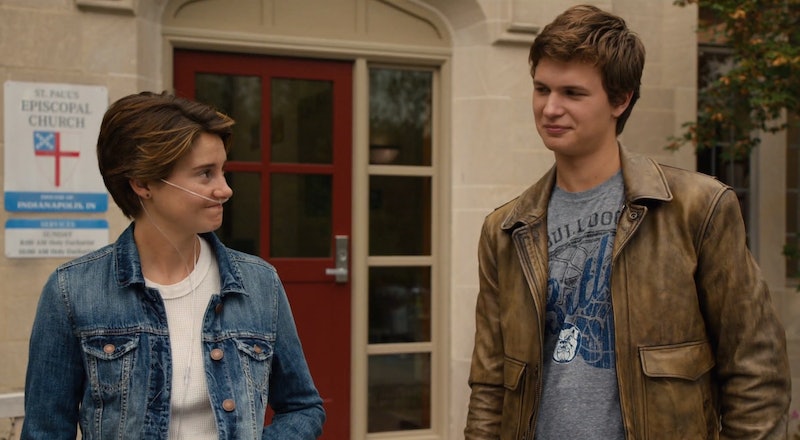 At this point in the Fault In Our Stars promotional kick, we've met Hazel Grace Lancaster and her love Augustus Waters in seemingly every which way. There they were on the cover of Entertainment Weekly, and chiding each other about cigarettes, and bantering behind the scenes. But this new Fault In Our Stars clip, though, is all the introduction we need.

This isn't technically Hazel and Augustus' first interaction in the story — as book readers will remember, they first catch each other's eye during cancer kid support group. Augustus makes a speech, Hazel makes a rebuttal, and they're immediately intrigued by each other. The movie could have moved some things around, of course, but if our instincts are correct this scene will take place as that support group lets out and the two formally meet for the first time.

And in terms of introductions to these characters, this is a pretty solid scene. It's a meet-cute not big on the gimmicks, but that's kind of why it's great. Augustus is forward and motivated ("you're beautiful"; "we should watch a movie together") with a heavy dose of the pretension he's so famous for. She's baffled by these traits but immediately intrigued, not forgetting to infuse the situation with her signature down-to-Earth humor ("you could be an axe murderer"). It's a rapport that sparks to life pretty immediately, which is a nice thing to witness in a film that will live or die on the chemistry of these leads.

It's no secret that we're clamoring for The Fault In Our Stars to finally hit theaters. This scene just made us all the more eager.