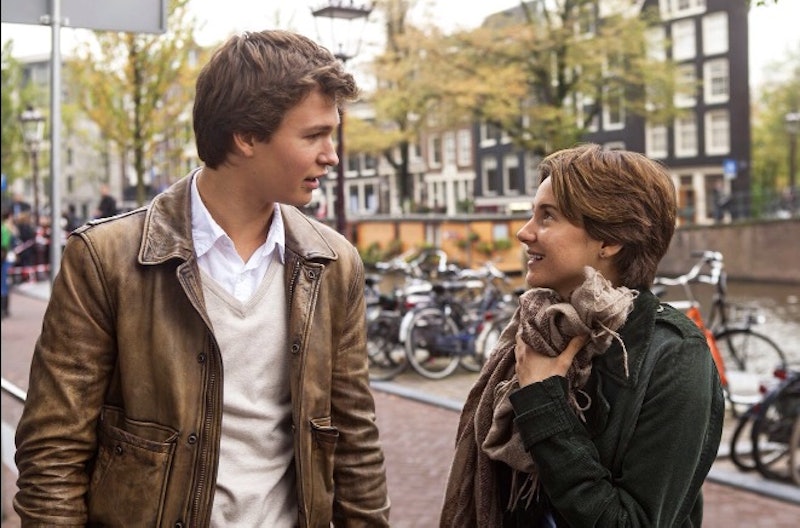 Most of what we know about the making of The Fault in our Stars movie has come from John Green's on-set tweets, but in a new MTV behind-the-scenes TFIOS featurette, it's stars Shailene Woodley and Ansel Elgort who share their thoughts about filming the highly anticipated adaptation. In the must-see video, the actors behind Hazel and Augustus talk about their off-screen friendship, working with Green, and the amount of crying done on set. Spoiler alert: it was a lot.

The clip shows Woodley and Elgort on the set of TFIOS, getting interviewed by MTV News' Josh Horowitz. The actors are likely on a break from filming; Hazel's cannula is gone, but Gus' basketball jersey is front and center. Judging from the two-minute-long video, Woodley is the talkative one of the duo, Elgort only chiming in to voice his support or make a funny comment. Still, it's exciting to see evidence of the two actors' strong rapport, and it makes us even more anxious than we already were for the movie's June 6 release.

It also makes our happiness for John Green grow even greater. One can only imagine how thrilled the author must be to see his little book turn into such a pop culture phenomenon, especially considering how much time he got to spend on set, watching talented actors bring his beloved characters to life.

" We both are such big fans of his as a human being and an author," Woodley said of Green, "that to see him so happy with sort of our adaptation of his creation is —"

"It gives you confidence," Elgort interjected.

"It gives you confidence, but it also... you fee like a little kid," Woodley said. "You just gave somebody a present and they really liked it."

The actors also talk about their off-screen friendship, aided by their time together playing brother and sister in Divergent .

"I think having that Caleb and Tris connection really was integral for us to do this movie together," Woodley said, Elgort nodding his assent.

The video also shows clips of TFIOS's filming process, giving viewers a new look at scenes like support group and the Amsterdam dinner. Sadly, it's too short a featurette to learn too much new information, but from the little that's shown, our expectations for TFIOS have grown higher than we thought was possible.