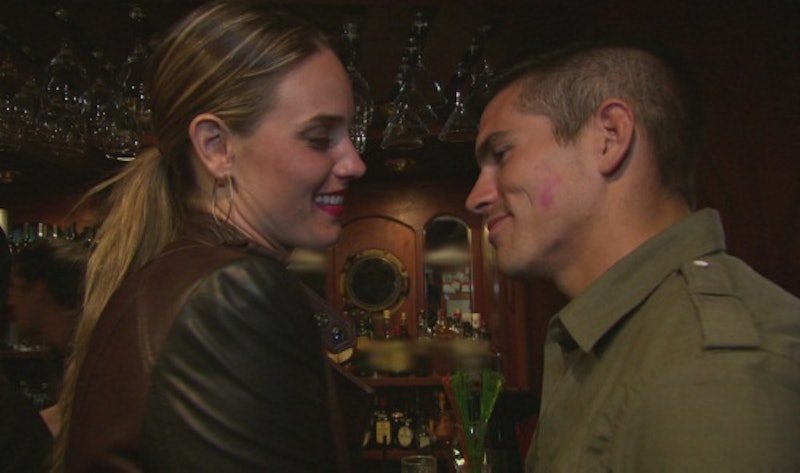 Despite this season being Free Agents, players on The Challenge keep pairing up. Thursday's couple at the center of the episode was Laurel and Jordan. The self-proclaimed top competitors faced a lot of heat for their inflated egos and ooey-gooey love fest. In short: they were everything everyone in the house wanted to hate. And oh, how they did. The beef with Jorel/Laurdan started with Aneesa who was fed up from being sexiled from her room and things only got worse from there when the duo rallied against the vet from all angles. It's only a matter of time before this all gets duked out in a challenge or an elimination round. Though it was Brandon (Nooooo!) and Latoya (Double nooo!) who were sent home this week, the fiercest rivalry is just getting started.

Things really started to boil over after rookie Jessica tattled on Jorel/Laurdan to Aneesa after they had a secret pow-wow about who to vote into the elimination. In turn, Jessica made an alliance with Aneesa, which later backfired when Jessica voted for Aneesa in a tie-breaker with Latoya. Leave it to Aneesa to play it straight and call out Jorel/Laurdan's shady behavior right to their faces. But it wasn't just Aneesa who had plenty of words for the couple everyone loves to hate. Latoya, Jessica, and CT all had puh-lenty to say about their bullying tactics with voting and snaky ways of playing the game.

Again, this season is Free Agents, so at some point Laurel and Jordan will end up facing off against one another or playing the other person for their own gain. And while all this showboating and fighting is going on, other players are flying safely under the radar. Alliances and romances can only go so far this season, especially with the random selection of the "kill card" in the elimination rounds. I wouldn't be surprised if the Jorel/Laurdan relationship blows up in a big, big way.

They say keep your friends close and your enemies closer, no? While they might be busy scheming against each other or every other person in the house, they're also being watched by the people they target. And now they've gone and pissed off Aneesa. Watch out, you two.

More like this
JoJo Fletcher & Jordan Rodgers Got Married In A “Playful & Fun” Wedding
By Grace Wehniainen
What’s New On Netflix: A Victoria Justice Rom-Com & The Return Of David Letterman
By Arya Roshanian
What’s New On Netflix: The Return Of 'Bling Empire' & A Rebel Wilson Comedy
By Arya Roshanian
Kanye Walked Out Of Kim's 'SNL' Monologue Because Of These 2 Words
By Jake Viswanath
Get Even More From Bustle — Sign Up For The Newsletter