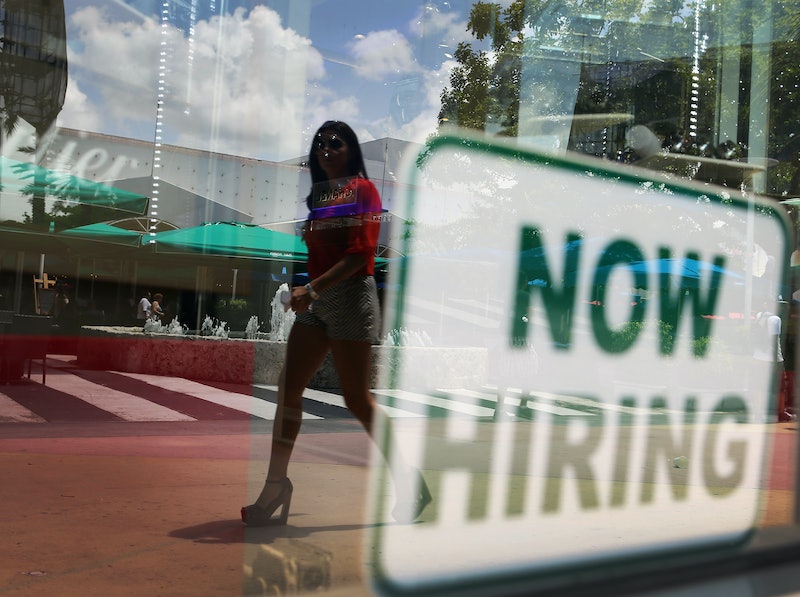 The release of each new Bureau of Labor Statistics monthly jobs report is a dramatic and hotly-contested issue in national politics. Eager to heap grief on a Democratic President and Congress over a high-joblessness economic recovery, Republicans like to take their shots over any less-than-rosy reports, and to their end, the Democratic Party and Obama administration want to tout the news when things are looking up. Friday's report, detailing the jobs figures from April, is the sort that could cater to both sides.

How should we react to this dramatic new jobs report, showing the highest total hirings in a month since early 2012? It's a little complicated, but here are three major takeaways to bear in mind...

1. Businesses Did a Lot of Hiring in April

This is the most obvious, unambiguously good news for the average American worker, and for the jobs picture going forward — April was positively brimming with new hires. Some 288,000 new jobs were created in April, following far slower months in January and February.

For some perspective, the average number of jobs created per month, over the last year, is 197,000, a figure handily beaten this time. The retail and construction sectors were especially productive this last month, hiring 35,000 and 32,000 new workers respectively. Business services, broadly an indicator of the health of white-collar industry, also had a strong month, bringing in 75,000 new workers.

2. Unemployment Really Shot Down, And That's Not As Great As It Sounds

If there's one quintessential understanding to deciphering the unemployment rate, it's this — a drop to the rate doesn't necessarily mean that more people have found jobs. That's because the people counted in the unemployment rate are only those people who're seeking work. If you've tried for so long you've given up looking, for the purposes of the BLM, you don't count against the unemployment rate.

After April, the BLM pegs the unemployment rate at 6.3 percent, down from 6.7 percent — a sizable leap in just one month, bringing the rate down to its lowest level since 2008. But the biggest reason for the eye-popping nature of that number may be, sad to say, workers dropping out of the labor force. At the same time as the economy added just shy of 300,000 new jobs, a whopping 806,000 Americans stopped looking for work. Also, average hourly earnings did not increase — who's for that minimum wage hike, again?

3. These Figures Will Be Different if You Check Back in a Few Months

This is a much-ballyhooed fact about BLM's jobs reports which conservative critics of the Obama administration and its recovery often cite — what was released today was merely the first analysis of April's employment numbers, and two more revisions will be rolling out in subsequent months. Right now, for example, the third and final revised analysis of March's numbers isn't even in yet.

That's because, in simplest terms, there's a lot of data for the BLM to parse. And while sometimes the Republican criticism does happen — a decent report being revised downwards after the fact, and staying out of the headlines as a result — lately, the revisions usually go the other way. Since 2012, eighteen months have seen their figures revised upwards, with just seven months revised downwards.

Obviously April's figures are strong, though not unprecedented — February of 2013 cracked 300,000 new jobs — so a downward revision wouldn't be the most shocking thing in the world. But there's also a strong chance that in a few months April's hiring will look even better than it does right now.