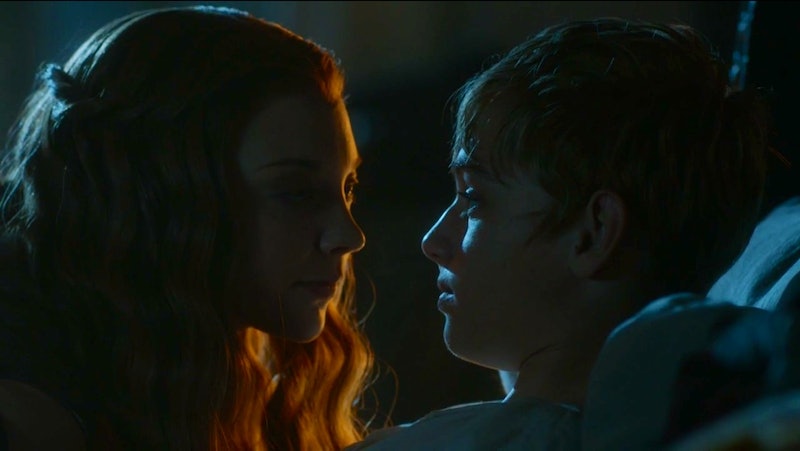 These days, you’d have to travel travel from Croatia (aka, King’s Landing) to Iceland (ahem, North of the Wall) to find even a handful of people who aren’t glued to Game of Thrones every Sunday night. And while this generally means watching in horror as characters you love are killed, or in disgust as characters you hate do the killing, it can also mean a different kind of wary watching of confusing and amusing scenes brought about by the rapidly growing young actors that play the various children of the Seven Kingdoms. For example, in the books written by George R. R. Martin, the image of nine year old Bran being carried all over the North by Hodor wouldn’t have been particularly out of the ordinary, but watching gangly 15-year-old Isaac Hempstead-Wright (playing gangly 13-year-old Bran Stark) being manhandled into a bridal-carry is a little more jolting.

Or, as with last week’s episode, slight alterations in ages from page to screen meant most audience members getting pretty nervous about what was about to go down between Margaery and Tommen in that ultimately innocent, seduction-by-sweetness bedroom scene, because a 16-year-old girl chatting with an 8-year-old boy has a much different suggestion than a 21-year-old woman, played by a 32-year-old, sidling up to the bedside of a 13-year-old pubescent teenager, played by a 16-year-old pubescent teenager.

The aging up of these characters from book to show actually effects David Benioff and David Weiss’ adaptation quite a bit: in Ireland, where much of the show is filmed, the broadcasting decency laws set the age of consent at 16, not for the actor portraying a character, but for the character itself. Accordingly, most of the main children were aged up by at least two years. Adding on the elongated structure of the timeline — whereas two years passes between the first and third A Song of Ice and Fire books, nearly four years will have passed in the four TV seasons based on those first three novels — the ages of the characters and actors who play the future rulers continue to have great effect on how creators are able to tell the story of the Iron Throne of Westeros.

George R. R. Martin has said that Daenerys’ storyline was the principal reason for all of the leading younger characters aging up two years in the series. Per United Kingdom broadcast decency laws, it was imperative that Daenerys be aged to 16, as she has a plot-important consummation scene with Khal Drogo on their wedding night in the very first episode; but Daenerys’ age is also inherently linked to the overall timeline of the Game of Thrones series (and A Song of Ice and Fire books) because her mother was pregnant with her when Robert’s Rebellion ended with the death of her father, the Mad King. This caused the timeline of the entire series to shift by approximately two years, and the ages of the rest of the young characters along with it.

Much of Sansa' torturing at the hands of Joffrey has been dulled down for the screen due to the still-young age of the character and actress. With Joffrey also being aged up from 13 to 16 years old, the pain he inflicts on Sansa seemed much more inherently sexual with the characters' older ages, even early on in the series. Sophie Turner had only just turned 16 when she filmed the Season 2 episode, "Garden of Bones" where Joffrey strips Sansa and begins having her beaten in front of his court. Even if the U.K.'s decency laws would have allowed for the depictions as it is in the books (with Sansa basically topless), audiences may draw the line at seeing a 16-year-old actress being stripped and beaten.

Arya's two-year increase in age mostly effects is mostly effected by her portrayer, Maisie Williams, going from looking much less like a little girl, or as she was supposed to seem, a little boy, in Season 2. It became much less believable that Arya could have been passing as a boy, but luckily, as that disguise has become less necessary, it's also become more likely that 17-year-old Williams won't be growing much taller than 5'0".

North of the Wall

HBO did their best to case age-appropriate child actors, they really did, but like Arya, the main adjustment with Bran's age has been that Isaac Hempstead-Wright suddenly looks much older than his character seems. Somewhere around his second season of tromping thought the woods, Bran shot up to about 5'8", making it a little bizarre that Hodor is still carrying him around. But given that he is forced to tromp through the woods without the use of his legs (unless he's wargin'!), it's really the only mobility option, book or show.

Tommen has been granted the largest age increase of the Westeros children, although the reasons are just beginning to reveal themselves. Until just a few episodes ago, Tommen was a background player, a smaller, less-deranged Joffrey — now he's meant to be king, and soon. Judging by the trailer for this Sunday's "First of His Name," Tommen's coronation is coming right up. The reason for aging the boy-king up into his teenage years would probably be to make the Margaery betrothal slightly less unsavory, but given it's now reasonable that they could consummate a marriage in a year or so, his older age might be having the opposite effect. Hopefully, like Margaery, his older age will mean he plays a much more vital role in the series than in the books.

Margaery doesn't exactly play a child, but her age increase is notable in relation to the men — er, boys — she's been betrothed to, and the 30s age marker of the actress playing her. GoT creators were so impressed with Natalie Dormer's portrayal, they were willing to significantly age Margaery up, while keeping her exact age vague. Her seductively manipulative nature certainly makes her seem older than the 18 years she would have been in the books at this point; but thank goodness that cunning means she knows that what it really takes to wrap a sweet 13-year-old like Tommen around your queenly finger is the promise of sex in the future, with the present reality of an innocent forehead kiss.