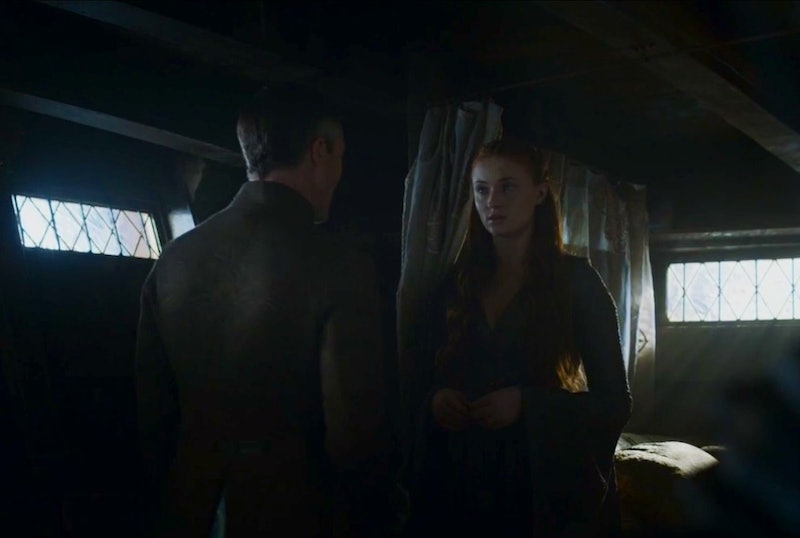 Despite her sister getting much of Season 4's attention, Sansa Stark sails onward on Game of Thrones , and though she technically played a role in Joffrey's poisoning, she's still functioning as a mostly unwilling participant in her own life. But change is on the rise for Sansa, as Petyr Baelish, aka, Littlefinger informed her after rescuing-slash-kidnapping her from King's Landing. It's hard to take the time to celebrate your freedom from a tormenting nephew (that's Joffrey) when you've just seen the guy that's been creeping on you since you were 13 (that's Littlefinger) kill the drunk fool that you thought was rescuing you (that's Ser Dontos), probably just so he can have you to himself (Littlefinger, again).

In "Oakthkeeper," Littlefinger helpfully explained to Sansa — while not helpfully caressing her shoulder — that he's been in cahoots with someone (cut to Olenna and Margaery Tyrell scheming in the garden, per usual) to kill King Joffrey and bring the Baratheons down. He's yet to reveal exactly why rescuing her from their grips needed to be a part of that, but the teaser trailer for this Sunday's "The First of His Name" suggests that Sansa's next chapter is finally getting started. Let's look to the books as a reminder for just how creepy things can get in good ole Westeros.

SPOILERS AHEAD because, ya know, source material.

Littlefinger has already informed Sansa in last week's episode that he's bringing her to the Vale, the land that her Aunt Lysa has been ruling since the death of her husband, Jon Arryn, until her son Robert comes of age. You remember Robert, don't you? The breastfeeding seven-year-old . As if we thought Sansa's marriage prospects could get any worse than Joffrey (OK, he's not worse than Joffrey)... but we're not quite there yet.

In A Storm of Swords, Petyr takes Sansa to the original "little finger" in the Fingers of the Vale, where she soon discovers that he is meeting Lysa for them to be wed. He preps her with a new identity, Alayne Stone, his bastard daughter, so as to protect her from detection of Sansa Stark, wanted king-murderer. To be fair, she hasn't seen her aunt in quite a few years; but given that it's said over and over that she looks exactly like her mother, Lysa's sister, the plan could use some work in the details department. But Sansa has bigger fish to fry than her auburn hair (yeah, that's a Tully pun). The night of the wedding, as Littlefinger and Lysa consummate — which Petyr looks none too happy about in the trailer, and that guy's a creep, but I can't really blame him — Sansa takes a walk outside, thinking of her own wedding and, briefly, of what's become of the Hound since she last saw him. Shippers rejoice!

When Sansa returns to her room, Lysa's bard, Marillion, attempts to rape her, only to be stopped by Lothor Brune, Littlefinger's guard who he had informed to watch over her. This is a lot of action for the show to accomplish in what will be at most, two scenes devoted to Sansa and Littlefinger's arrival in the Vale. Sansa also goes on to dream about the Hound in her bed that night, so perhaps that will be the story they focus on, as it could tie in with he and Arya on the road. Marillion's role, however, is ultimately more important to Littlefinger's time in the Vale. The trailer definitely makes it clear that the show will make it to the morning after the wedding when Lysa confronts Sansa, telling her show knows that she is her niece, and wondering why her now-husband, Petyr, has such an interest in her well-being.

Good question, Lysa. Maybe say it with a little less crazy in your eyes next time. Auntie Lysa agrees to keep Sansa's secret and insists on dying her signature auburn hair brown (noooooo!) to complete her transformation to Alayne Stone. And just in case she start to feel too "rescued" or "safe," Lysa also proposes Sansa's betrothal to her sickly son Robert, who will proceed to get in her bed every night and pee in her sheets until she's able to team up with Littlefinger and reclaim...well, let's not get ahead of ourselves.

For now we can probably at least count on an arrival in the Vale for the Littlefinger wedding, cross our fingers for some not-too-creepy Hound nostalgia, and likely end with Sansa realizing she's moving from Tyrion to her gross little cousin, Robert. Talk about a downgrade.