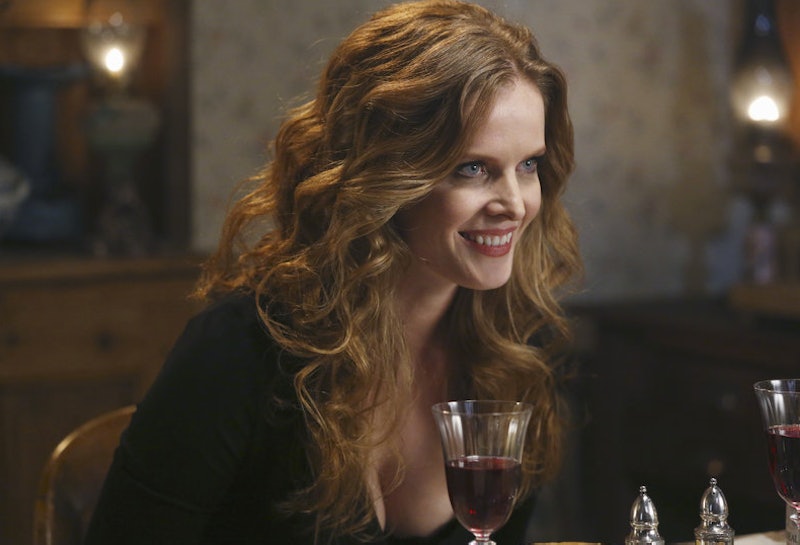 On Sunday's episode of Once Upon a Time, Snow White is going to have her baby and The Wicked Witch, Zelena, is finally going to enact her evil plan. We've known for a couple of episodes now that Zelena plans to go back in time so that she can be the one to cast the Dark Curse and acquire everything that Regina has, but she needs Snow White's newborn to do it for reasons that are still unclear. Considering Zelena's plan could wipe Regina out of existence, not to mention what it could mean for Snow White, Prince Charming, Emma, or Henry, the heroes are obviously desperate to stop her.

Zelena is the most powerful and most ambitious villain that we've seen in Once Upon a Time so far. Her plan involves breaking the very rules of magic and other characters have made it repeatedly clear that anyone who has ever tried to go back in time has failed. Zelena is so convinced that she can do it that we're all right to worry about what this could mean for season four.

However, although the Wicked Witch has been getting a lot of build-up and promotion as the most terrifying villain that our heroes have ever faced, is that actually true? Storybrooke is in trouble every other day, after all, and the Wicked Witch has some real threats in the ring with her. Where would she actually rank on the list of Once Upon a Time villains?

The first half of season three saw our heroes head to Neverland in order to rescue Henry from the clutches of Peter Pan. But this isn't your friendly neighborhood Disney Pan. This Peter Pan was capricious, ruthless, mocking, smug, and related to Henry like every other person on this list. However, at the end of the day, Peter Pan was just a deadbeat dad stuck on his own childhood who never would have bothered our heroes if he hadn't needed to keep his selfish dreams alive.

Cora was built up as a villainess so terrifying that all the other villains were scared of her. Regina and Rumplestiltskin were willing to trap Emma and Snow White in the Enchanted Forest forever if it meant keeping Cora from coming back with them, because she is ruthless, manipulative, and incredibly powerful. However, Cora's greatest brand of evil was the influence she asserted over her children. While you have to give it to a woman who ripped out her own heart and stashed it away so she wouldn't be bothered by silly things like emotions, Cora's more of a puppet master than a true player.

Regina Mills has one of the highest body counts of any villain in the whole series. She wasn't born evil; she was made that way. However, she certainly took to it very well. She cursed a kingdom full of otherwise innocent people to 28 years of amnesiac misery just so that she could have her happy ending after launching a vendetta against a little girl for falling prey to her mother's manipulation. The series has done a great job at believably redeeming Regina from her Evil Queen days, but the fact still remains that when she was still the Evil Queen she was terrifying.

Sadly, Zelena would only be second on the list of Once Upon a Time villains. If her mother was motivated by greed, then Zelena is motivated by envy. She wants everything that Regina has and doesn't care who she hurts during this crusade. She has Rumplestiltskin under her control and is a more powerful sorcerer than anyone else in town. She's a master of disguise who turns people into flying monkeys. She's every bit as wicked as she promised, yes, but she still loses out to...

1. The Dark One, Rumplestiltskin

Why is Rumplestiltskin the worst villain that Storybrooke has ever faced? It's because he created every other villain on this list. It was the Dark One who taught Cora how to use magic. It was the Dark One who taught Regina magic and manipulated her until she was low enough to cast the Dark Curse. It was the Dark One who cruelly rejected Zelena and pushed her over the edge to gain his favor. Admittedly, Rumplestiltskin had nothing to do with his father's decision to abandon him to become Peter Pan and was the one who killed him, but everything that's happened in the series thus far is technically his fault. After all, everything happened because he wanted to see his son again. At least, until Zelena undoes it.