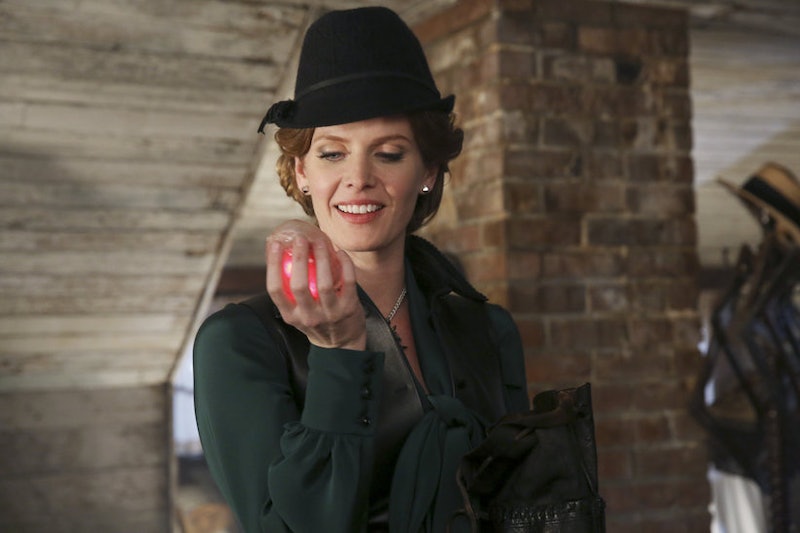 Well, that was easy and not entirely what we expected. Sunday night's episode of Once Upon A Time boasted the return of Rose McGowan as young Cora, but that wasn't all we got. Zelena, as she steadily acquired her ingredients, revealed her master plan — and we should all be even more scared than when we found out she kept a large animal cage in her storm cellar. I mean, she needs a newborn baby to complete this evil act of revenge — that's just so far beyond anything we've seen on this show. But somehow, and this is going to sound crazy, I was left feeling kind of sorry for her.

Are you ready to find out what Zelena's been planning? Well, here it is: She's going to go back in time to kill Snow's mother so that she and Cora can live happily ever after with Prince Leopold. Do you see the obvious problems here? IF she were to succeed (and that's a huge IF), Mary Margaret, Regina, Emma, and Henry would all never have been born. Essentially, we'd lose half of the principal cast of OUAT and that would just be ridiculous, considering they just wiped Neal off the series a few weeks ago. So, in a sense, we feel kind of sorry for Zelena because she's obviously going to fail and that'll make her even more miserable than confronting her pretty terrible past.

On Sunday night, she finally acquired Regina's heart — by way of Rumpel — but because Regina thinks of absolutely everything (she is Cora's daughter, after all), Zelena can't really use it. Well, at least that's what she thinks. Other than the heart, Belle was able to look at the other ingredients Zelena'd been gathering to find out exactly what she's up to — TIME TRAVEL, REWRITING HISTORY, MASS MURDER — and now we're on a literal witch hunt again to stop her. Because no one wants to die, obviously. It was also revealed why Zelena pretended to be a midwife so that Snow and David would hire her — she needs their baby to complete the spell. Now that's effed-up. I get that you've got a MAJOR vendetta against everyone but bringing children into the mix? That's truly the mark of a monster. Hide your kids, hide your wife, people.

But anyway, flash to young Cora — who gets betrayed by a gardener calling himself Prince Jonathan after he proposes, gets her pregnant, and peaces out (so, on top of everything else, Zelena has a dead-beat-dad, ugh). She's mad for a second but then she runs into Leopold and she charms him right into calling off his arranged marriage to Princess Ava. (Damn, that witch is good.) But, of course, Jonathan returns the day before her wedding, attempts to extort the future happy couple, and Princess Ava overhears because OUAT is a drama, not just borderline psychotic fantasy. Leopold catches Cora in a lie about being pregnant and stealing from the castle, thanks to Ava being an ultimate eavesdropper (new gameshow idea?), and calls off their wedding — leaving Cora with no choice but to give up her newborn daughter because she can't possibly take care of her.

Now, here we are feeling sorry for the WORLD'S WORST MOTHER, Cora, because she just can't catch a break. And we're feeling even worse for Zelena, who still wants to kill everyone, by the way, because we watch Cora leave her newborn baby in the woods. That's heavy — and we're not saying that we get where Zelena's coming from in her murderous plot, but we will say that we felt a pang of heartache for her. Like the most famous of Hollywood orphans, she just wants a family and a better life — which is a strikingly simple sentiment considering she wants to use a newborn baby and a heart to exact revenge on a small army of characters.

Once again (ha), Once Upon A Time gets us good with "You Don't Know Their Life" and has us feeling sorry for someone that's trying to make a huge mess out of everything. Because you know, every villain has a heartbreaking, self-esteem-crushing story in their past that justifies their evil and depraved behavior (like targeting babies).

More like this
What Is Ariana Grande's Net Worth? When It Comes To Money, She Has No “Problem”
By Hugh McIntyre
17 BTS 'Love Island' Secrets Only Real Fans Will Know About
By Bustle UK
Everything To Know About The Terminal List Season 2
By Kadin Burnett
6 Shows Like Stranger Things To Get Over Your Emotional Season 4 Hangover
By Kadin Burnett
Get Even More From Bustle — Sign Up For The Newsletter