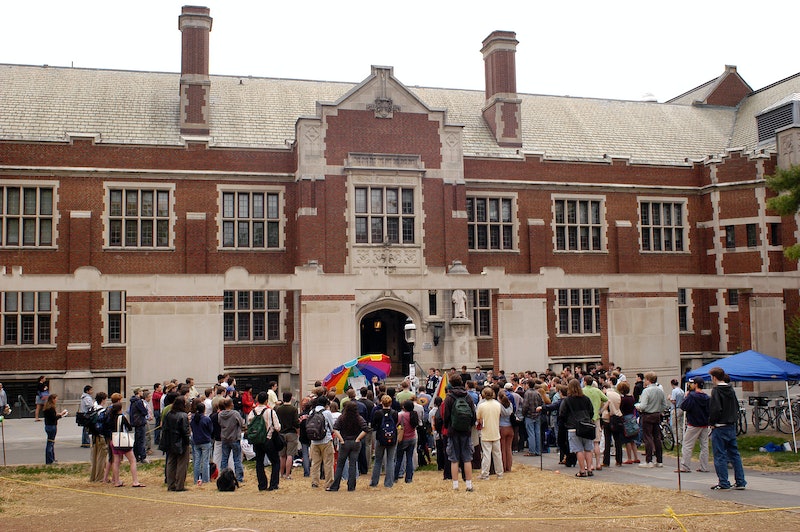 If you’re involved in the social justice movement in any way, it’s likely that you’ve been told you “check your privilege” a time or two. Most of us have privilege in one form or another, even if we belong to an otherwise marginalized group. For example, I will face fat discrimination as a fat woman, but I won’t deal with discrimination based on my skin color because I am white.

In a column called "Why I'll Never Apologize for My White Male Privilege" that somehow managed to make it from The Princeton Daily to TIME Magazine, college freshman Tal Fortgang makes a bold proclamation: he realizes his white, male privilege, and he’s not apologizing for it. This, of course, is not anything new. White men have been refusing to recognize their advantages with regards to the imposition and enforcement of race and gender-related social norms since the beginning of time, so Fortgang is just continuing a long legacy of his predecessors.

Either way, he is still a college freshman with much to learn about the way privilege and oppression actually work in the world. I was 25 years old before I even heard the word intersectionality, largely due to the fact that straight, white, cisgender men get the most attention in the history and philosophy books.

I was once a college journalist, and I was equally terrible. My first column at Texas Tech’s The Daily Toreador was called “Republicans Are Ruining America.” Like Fortgang, I was ballsy, but woefully misinformed. Instead of taking down a college freshman with my unbridled feminist rage, I decided it would be best to express my feelings far more productively – with GIFs. Here are seven of Fortgang's most misguided quotes, and my response to them.

1. "'Check your privilege,' the saying goes, and I have been reprimanded by it several times this year. The phrase, handed down by my moral superiors, descends recklessly, like an Obama-sanctioned drone, and aims laser-like at my pinkish-peach complexion, my maleness, and the nerve I displayed in offering an opinion rooted in a personal Weltanschauung.”

2. “'Check your privilege,' they tell me in a command that teeters between an imposition to actually explore how I got where I am, and a reminder that I ought to feel personally apologetic because white males seem to pull most of the strings in the world."

3. "I do condemn them for diminishing everything I have personally accomplished, all the hard work I have done in my life, and for ascribing all the fruit I reap not to the seeds I sow but to some invisible patron saint of white maleness who places it out for me before I even arrive.”

4. "But they can’t be telling me that everything I’ve done with my life can be credited to the racist patriarchy holding my hand throughout my years of education and eventually guiding me into Princeton. Even that is too extreme."

5. "That’s the problem with calling someone out for the 'privilege' which you assume has defined their narrative. You don’t know what their struggles have been, what they may have gone through to be where they are. Assuming they’ve benefitted from 'power systems' or other conspiratorial imaginary institutions denies them credit for all they’ve done, things of which you may not even conceive."

6. "Behind every success, large or small, there is a story, and it isn’t always told by sex or skin color. My appearance certainly doesn’t tell the whole story, and to assume that it does and that I should apologize for it is insulting."

7. I have checked my privilege. And I apologize for nothing.

That isn't necessarily true for people of color and other oppressed minorities. Even though slavery no longer exists in the United States, institutional racism does. Although women are now allowed to own property, they still are still objectified and sexually assaulted at staggering rates.

For example, When Tal Fortgang graduates college, he will have a significantly higher income potential than his classmates who are not white men. Not because he worked any harder than his black and female classmates, but by the sheer virtue of being a white man. That is not something that his grandfather worked hard for after coming to the United States. That is the result of patriarchy, whether he wants to admit it or not.

In the end, whether or not Fortgang wants to check his privilege, he still has it. No one who is telling him or any other white, straight, cisgender man to do so is hoping to "make them feel bad about being a white man," they're doing it to ensure that he understands the context of his opinions and how they fit into a world that has used the privilege of being white and male to commit violence and oppression.