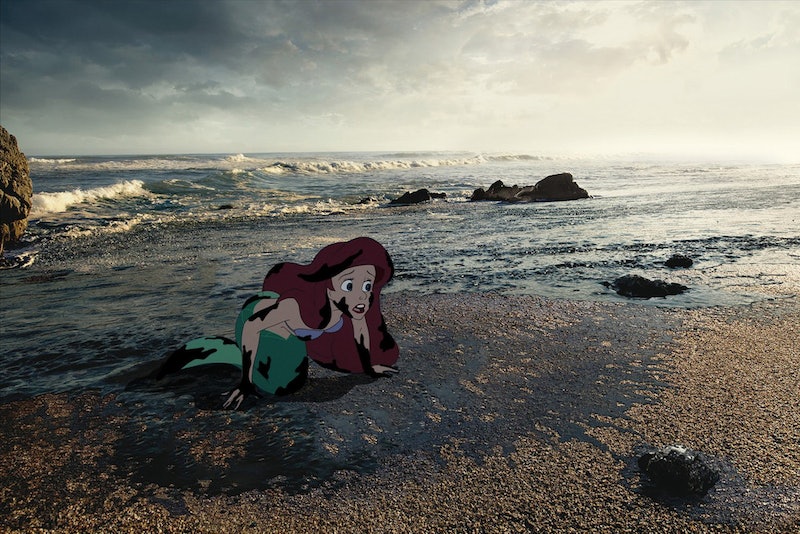 What is the wonderful world of Disney really like? Not so wonderful, apparently. Redditor GrumpyPunkCat has created "Disney Unhappily Ever After," which may or may not tarnish all your childhood memories. It's disturbing, but also a little too real. Disney characters are supposed to live in fantasy land, right? Nope, not in this image gallery.

Yeah, nobody told you when you were watching Mulan and learned the valuable lesson that even a lady can kick ass that she'll probably die of SARS, or that Pochahontas' descendants would be owning casinos, or that Ariel would probably die on land. (However, I did crack a smile at Alice — she's not in Wonderland, but in a dark alley because seriously — where does one really get those kinds of magic potions, anyway?)

Still, you're a grown ass lady and probably recognize that our world is not akin to that portrayed by the House Of Mouse. Nope, it's sadly rife with racism, disease, and sexism. But when you were a kid, you probably looked at these princesses, princes, and talking animals and saw something ideal, something beautiful, something that maybe — just maybe — the world could actually be.

We can't deny that Disney characters always make for great image gallery satires, since they're so idealized —and this set of images brings to mind the photo set that imagined Disney princesses as though they were real women. This image set is a blatant reminder of just how glossy and pink the Disney princess world is, while also reminding us that our world ain't no Disney movie, either (even if this winter felt like we were under Princess Elsa's reign in Frozen ).

Although that's the thing — Disney is a magical land that we don't necessarily want ruined by the atrocities in the university. A dream is a wish your heart makes, right? Apparently not. Welp, there goes my childhood innocence. It was nice knowing it.

Check them out below. But be warned: you will feel things.