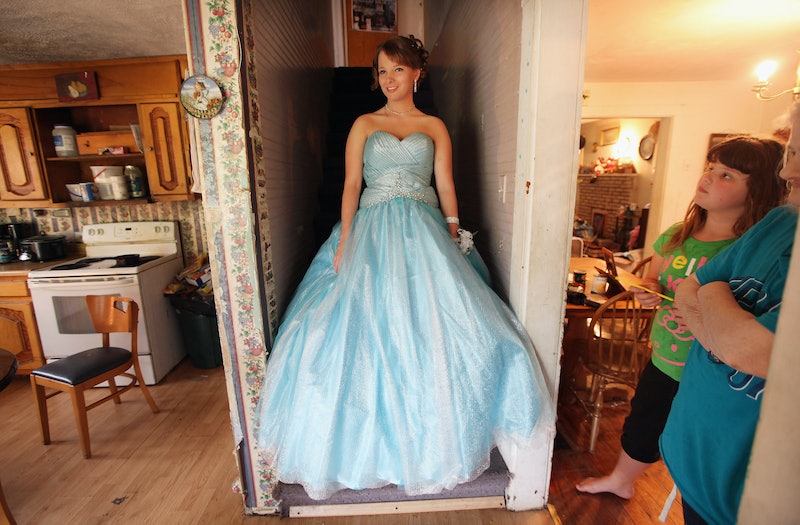 I know the feeling all too well: everyone is getting psyched for this epic event at your school, and you're like "Crap. I'm going to prom alone." Fear not, fellow folks going stag! I went stag, too, and I grew up to be a perfectly well-adjusted adult who pays her bills and even — gasp — has a boyfriend. I don't even have cats!

But I get it: you can feel like you're the only one, and when all of the couples are dancing on the dance floor, you might feel the urge to cry into your mediocre chicken and vegetable dish while chugging Shirley Temples. But if you know what you're getting into — and realize all of the BS you're not getting into — you could have the best prom ever.

And worst case scenario? Your prom experience isn't so hot. But guess what? If prom turns out to be lame, it probably won't because you went solo — it'll be because you're sooo over your high school classmates, or because you get your period randomly and you're wearing a pale dress (be prepared, ladies!). Still worried? Here are some ways to prepare. You WILL survive, sister!

1. Take A Lot of Solo Pictures

When you're looking back at pictures in 10 years, you won't care to see documentation of some random date you likely haven't talked to since. You'll want to see how awesome (or awesomely hilarious) you looked in your rad prom dress. Granted, by 2024 you may wonder why Taylor Swift was your fashion muse, but for the night you'll be a solo star.

2. Bust Out Your Comedic Side

I made jokes the whole night! I sandwiched myself between my friends with dates and pretended I was their "love child." They were OK with this, don't worry.

4. Realize You Won't Have To Do An Awkward Slow Dance

Let's face it — half of these people with dates aren't even in relationships. These slow dances will rival Napoleon Dynamite for awkwardness. And you, my friend, won't have to do any of that.

5. Instead, Primp Yourself In the Bathroom During Slow Songs So You Always Look Perfect In Pictures

Prime opportunity to put on deodorant, too.

6. Know that Prom Isn't About Having A Random Date, It's About Being With Your Best Friends

Your friends with random dates who aren't their boyfriends? They's probably rather hang out with you anyway, since it's an occasion to get dressed up and celebrate with your girls. Realize that you're setting that "it's about us!" mentality in motion by going stag. That's awesome!

7. Remember That All The Guys You Want To Date Are Probably In College Already

You mature, lady, you. That dude of your dreams is probably a year or two older than you and from another state, and you'll meet him next year.

8. Remember That This Is Just A Few Hours

If it's killing you that much, realize that when you wake up, this will all be over.

9. Realize That Prom Is Not Going To Be The Best Night Of Your Life

In fact, you have so much to look forward to. The fact that prom has such high stakes is a tad absurd, don't you think? It's a fun opportunity to get dressed up and celebrate with your friends, but you have college, jobs, weddings, hell, even babies ahead of you — I know it's scary to think about now, but things get better. It sounds super trite, but think about it: you wouldn't want your life to be downhill from age 17, would you? Didn't think so. Now go out on the dance floor and have a blast, you fierce independent woman!