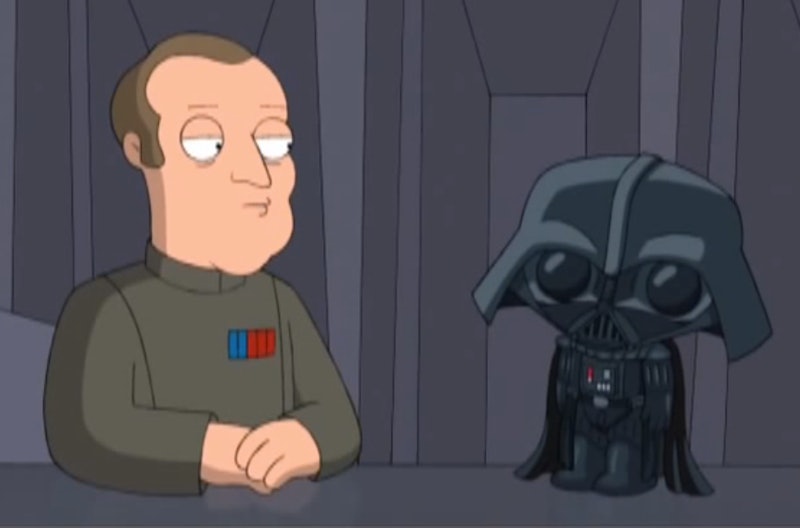 On this hallowed Star Wars Day, otherwise known as "May the Fourth (be with you)," many Star Wars fans are probably sitting down for a marathon film viewing, replete with themed foods and a Jar Jar Binks punching bag (more than any other creature on the show, Jar Jar is proof that evolution can backfire). If you don't have the patience for that thirteen and a half hour marathon, you don't have to castigate yourself by diving headfirst into the patient tentacles of an adult sarlacc. Instead, you can take the easier route to fulfillment by watching these parodies, hand-selected and pre-screened by yours truly. I have done my best to cut out any images of the breathtakingly wooden adult Anakin (the floating pear scene, anyone?). You're welcome.

Ultimately, this collection is about recreating the Holy Grail of science fiction cinema. For the children who wished they could curl up in their own tauntaun belly on a cold winter day, who bought the light sabers that you could "turn on" with your mind and a flick of the wrist, or who wanted to braid beads into Chewbacca's long, luscious hair, these imitations are for you. So sit back, press play on the ever-catchy "Cantina Theme," and let the spoofed memories of your childhood wash over you.

Featuring Obi-Wan Cannoli, Cuke Skywalker, and Darth Tater, this brilliant six-minute parody is bursting with food-related puns and wholesome messages. The big take-away: shop organic! Due to the brilliant casting of eggs as Stormtroopers, I will always consider making an omelette an act of rebellion against the dark side of The Farm. The best line? "Search your peelings, Cuke. You know it to be true."

Thank you, "Weird Al" Yankovic. This parody of Don McLean's "American Pie" manages to sum up all of Star Wars Episode I: The Phantom Menace. In addition, Yankovic's hairdo perfectly captures the stork's nest that graced Ewan McGregor throughout the film. Favorite line: "Do you see him hitting on the queen?/ though he's just nine and she's fourteen/ yeah, he's probably gonna marry her someday." Stand-out guest artist: Darth Sidious on the piano.

Stewie Griffin kills it as Darth Vader. This Family Guy episode, the first in Season 6, parodies Star Wars Episode IV: A New Hope. The clip above manages to spoof the "aesthetic choice" of a two-meter hole in the Death Star, as well as the use of "womp rat" as a unit of measurement. We also get a sneak peek at the frustrations of the Los Angeles real estate market, as well as the bureaucratic machinations that prioritize "estimates" over actually solving the problem. This is Family Guy at its finest. Check out "Something, Something, Something, Dark Side" and "It's a Trap!" for Family Guy retellings of The Empire Strikes Back and Return of the Jedi.

Seth MacFarlane appears in this Robot Chicken episode as the voice of an irate Emperor Palpatine. The full episode features a number of clips spoofing different moments from Star Wars, my favorite of which are the "Empire on Ice" musical and the sketch where Obi-Wan ends Ponda Baba's career as an architect by slicing off his drawing arm in the cantina.

In this hilarious clip from the 2005 MTV Movie Awards, Fallon steps into Anakin's boots for the dramatic confrontation between him and Padme on the lava planet Mustafar. He tries to convince her that their new home is totally rad, but his Jack Black impersonation and touchiness about his feathered hair drive her into hysterics. He forgets to "turn off the Force" when describing the cup holders he wants to install, resulting in her accidental strangulation. It's hard out there for a Jedi.

Sometimes genius needs no words. In this music video produced by The Piano Guys, cellist Steven Sharp Nelson acts out a lightsaber duel between a Jedi and Sith cellist. From Chewbacca as a backup dancer to Darth Vader on the accordion, this clip has it all. The most endearing moment appears at the end, when Nelson uses his Jedi mind control to force viewers into cello lessons.

This one's for the purists. In a frame-for-frame spoof of Gotye's "Somebody That I Used To Know," Eddie King and Tyler Marshall bemoan the transition from the older, lower-tech films to the more recent and poorly acted (sorry, Hayden Christensen) episodes in the saga. Huzzah for a painted Vader and repentant George Lucas!

Obviously, this is not a comprehensive list, as there are nearly as many Star Wars spoofs as there are stars in the galaxy. While the rat tail fad may have faded away in recent years, our love for the ongoing series cannot be crushed, even by a herd of stampeding Ewoks. Here's to you, Star Wars fans, and May the Fourth be with you!