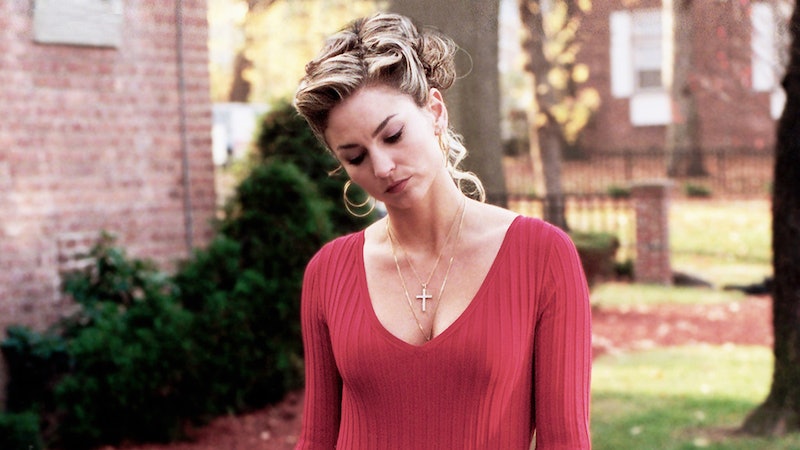 Right now, artisan piercings on obscure parts of the ear with names like "tragus," "rook," and "diath" are having their moment. From lobe to cartilage, it-girls like Daria Werbowy and Miley Cyrus have their ears lined with petite piercings in the forms of mini-chains and tiny studs.

But what about bad girl, door-knocker earrings — those fist-sized, swaying hoops? I became a little nostalgic the other day when I found a lone, tarnished hoop in an old suitcase. I wore them from middle school up through my second year of college. Despite being perpetually wary that my earring would catch, ripping my ear clean off my head, hoops were considered cool and always added a devil-may-care attitude to any outfit. Except, they can get a trashy rap. One time, a guy told me a gross joke about the beloved jewelry: "Why do sluts wear hoop earrings? So they can rest their ankles in them." Pleasant.

Despite the gross generalization of hoops, the accessory is as much of a classic as "ladylike" pearl studs — hoops have been around forever. In any music video or film from the early 1990s to the beginning of the 2000s, the earring style was a wardrobe staple. J-Lo had a pair for every song (she still does!), Cameron Diaz repped them in her rom-coms, and Janet Jackson made her film debut in Poetic Justice with a pair of silver halos hanging from her lobes. Hoops on these women are not trashy — they are smart with killer style, albeit with a rebellious attitude.

Still, the ear ornament is not an accessory for the meek — can anyone imagine a GOOP-y Gwyneth Paltrow talking about pan-seared swordfish and bok choy rocking a pair of rhinestone-studded bracelets on her ears? No. Hoops are unsubtle, in-your-face, and have a bad-ass flair — just like the women that wear them.

In The Sopranos, Adriana la Cerva, the girlfriend of mobster Christopher Molitsanti, always appears in a shiny glory of golden hoops. As a quintessential, belly-baring fashion icon of the early 2000s, Adriana has a bite to her personality — she’s over-the-top with her fast-talking, Jersey-thunk dialect and teacup dog under her arm. She is also the master of hoops, doubling them up by putting a slightly smaller pair in her second ear piercing.

Then, there's Jennifer Lawrence as Rosylan Rosenfeld, the charismatic-yet-unstable wife of a con-artist, in the 1970s-set American Hustle. When she gets in an argument with her husband, Rosenfeld manages to make him forget and seduce him with an air of crazed sex appeal and big bouffant hair. She sheds her night clothes, leaving just one crucial accessory in place: her gold hoops.

And, of course, there's bad girl Ri Ri. In "What’s My Name," Rihanna gyrates and seduces Drake in a shanty bodega. Her hoop of choice? Massive Rings of Saturn made from thick gold that peek out from under highlighter red hair.

Queen Bey herself has had a flirtatious history with hoops. In the music video for "Irreplaceable," she kicks a man out of her life and shoos him to the side while rocking a pair of massive disc earrings. There is also the Beyonce who plays the character, Foxxy Cleopatra, a mouthy undercover FBI agent who poses as a disco singer in the 1975-based film Austin Powers In Goldmember. Foxxy Cleopatra's signature accessory? One single, imposing hoop that takes of almost half of her face.

The oversized jewelry adds an element of unabashed excess to any look, so it is no surprise that the sauciest ladies in music and in film wear them. Hoops aren't trashy, they're bold. Let's give hoops the late '90s comeback they deserve, because like diamonds, hoops are forever — as long as they don't get caught on anything.