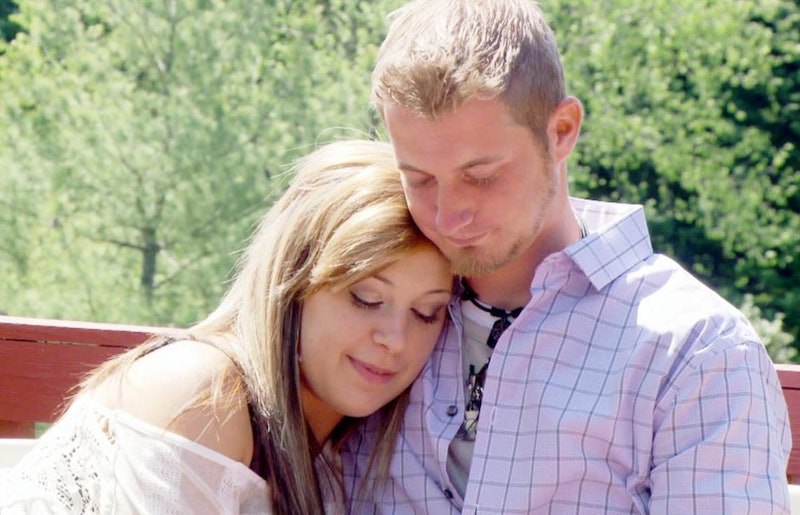 The show that made you terrified to go online is back. Season 3 of Catfish: The TV Show premieres Wednesday, and we can't wait to see all the twists, shocking reveals, and love connections it has in store for us. And if we've learned anything from the Catfish Season 3 trailer, it's that this season promises to be just as mystifying, shocking, and heartbreaking as the first two.

Even though we're about to meet a whole new group of catfishers and catfishees, we can't help but wonder about the relationship status of the couples who appeared on the first two seasons of the show. Whether the people on the other side of the computer turn out to really be who they say they are, when they don't end up in a brawl or refuse to speak to one another again, some couples pursue a romantic relationship, others at least remain friends. But how long does the connection last? Though each episode ends with a little update on the couple after some time has passed, we know a lot can happen when the cameras turn off and real life begins.

That's why we've done some fishing of our own to see who among some of the most memorable Catfish couples are still together today. And some of these updates are about as surprising as the end of a Catfish episode.

Oh, these two. Lauren and Derek set the bar insanely high for all Catfish couples to come. Lauren chatted with Derek for eight years on MySpace before meeting for the first time on Season 2 of Catfish. To everyone's surprise, Derek actually turned out to be exactly who he said he was, and the two became a real-life couple in no time. Derek proposed on the Season 2 reunion show, and it seemed like he, Lauren, and her 3-year-old son Mason would live happily ever after. Unfortunately, Us Weekly recently reported that the two have ended their engagement. If this couple couldn't stay together, is there any hope for the rest of us?

What's crazier than one catfish? Two of course! Ashley and Mike communicated online for seven years before they finally met in person to discover they had both been using fake photos of themselves because they were embarrassed about their weight. Ashley was hesitant to forgive Mike at first, but then she decided to give him a second chance. When we left the episode, Ashley and Mike were on good terms and still in contact. Sadly, on Oct. 12, 2013, Mike tragically died from a pulmonary embolism as a result of deep vein thrombosis. After Mike's death, Ashley told MTV News the couple had been "very much in love," and had planned to spend New Year's Eve together.

This is the one that started them all. Sunny was the very first person to appear on Catfish. The then-21-year-old thought she had been chatting on Facebook with "Jamison," a male model and Chelsea Lately cue card writer aspiring to be an anesthesiologist, who turned out to be a teenage girl named Chelsea. Chelsea's experience being bullied in high school partly inspired her to pretend to be "Jamison" to trick other young women online. By the end of the episode, it looked like this was the start of a beautiful friendship between Sunny and Chelsea. But when the reunion show aired, Sunny said she and Chelsea had not been in contact at all, which seemed pretty clear from the two sitting apart and not even looking at each other. Awkward.

In this Season 1 episode, Kya at first admitted to using a fake name and fake photos of herself when chatting with "Alyx" online. But when Kya finally met "Alyx," he turned out to be Dani, a transgender man. Kya wasn't too bothered by the revelation, and the pair started dating by the end of the episode. Less than a year after their episode aired, Dani tweeted that he and Kya were no longer together.

Catfish is already crazy, and when you add a love triangle in the mix, it's almost too much to handle. Almost. Dorion had already been dating Raffinee when he started talking to "Jeszica" online, and with Raffinee's (sort of) blessing, he met "Jeszica" in person. She actually turned out to be Alexis, a young woman who created the profile when she didn't know anyone in her new town. Dorion ended up choosing Raffinee over Alexis, which she didn't take too well. After the episode aired, Dorion and Raffinee were still together, but in an interview with Dorion, Raffinee, and Alexis, the couple didn't seem like they were on the same page in their relationship. At least they have their love for each other in common.

Like many catfish, Felicia always offered up excuses for why she and Mike couldn't meet. Luckily with Nev and Max's help, the pair finally met and Felicia turned out to mostly be the person she said she was, give or take a few details (you can't be too picky when you're on Catfish, right?). During the episode's epilogue, we learned that Mike and Felicia officially became a couple, and Felicia was planning on moving back to New Jersey to be closer to Mike. Unfortunately, shortly after the episode aired, Felicia tweeted that Mike stood her up at the airport when she came to visit him, and their relationship was over. Felicia's current Twitter profile photo shows her kissing another man, so it's safe to say she's moved on as well.

Rod thought he had been speaking to a transgender woman named Ebony for a few years, under the name "KJ" and using photos of his cousin instead of himself. When they finally met in person, Ebony was pretty upset about the truth, but then she dropped an even bigger bombshell on Rod: She has an 11-year-old daughter and she was not in fact transgender, she was born a woman. And then Rod revealed he continued to speak to Ebony online only because she was sending him money. Then she told Nev and Max that she only spoke to Rod because she thought he was gay, and she just wanted a friend. Can anyone else follow this tangled web Rod and Ebony wove? The pair were able to move past all this, and Rod and Ebony remained "cordial" and still talked after the show was over.