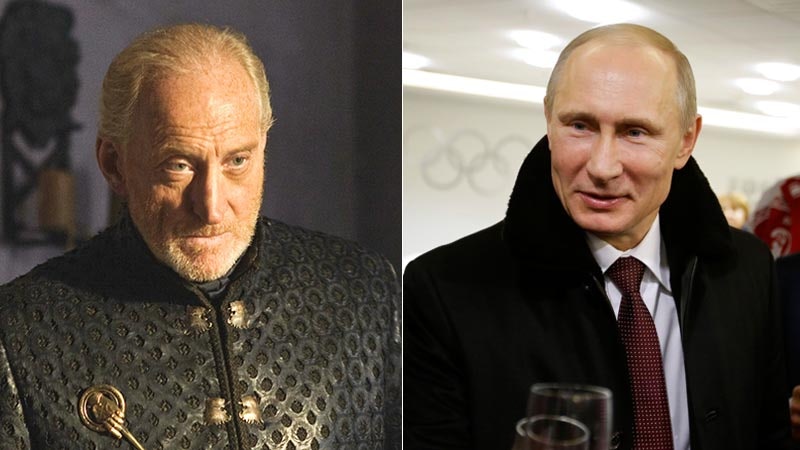 Is that Vladimir Putin or Tywin Lannister? When it comes to the Russian Federation and the reigning puppetmaster in Game of Thrones, sometimes it can be hard to tell one land-grabbing lord from another. Russia's early 2014 annexation of Crimea has nearly sprung into a full-fledged war of the (G)7 Kingdoms, so there's no time like the present to start figuring out what the heck is going on over there. We're here to expound on the similarities between Game of Thrones' Westeros and real-live Russia, so you can explain what's happening with Ukraine to your buddies too glued to HBO to know what's going on in the world. Explaining sans-GIFs is hard work, after all.

No metaphor is perfect, and the George R.R. Martin's Game of Thrones universe is almost as complicated as the real world's. This isn't meant to be a perfect analogy, but a quick way to talk about unfolding geopolitics in GIFs featuring your favorite TV show, which everybody's game for, right?

At times, Ukraine has really been played.

It's hard to tell whether the ruling party is super rich or actually has no assets at all.

And speaking of, we really don't know how much money Putin has. Remember, Putin, the Iron Bank always gets paid in the end.

Yeah, we're talking about German Chancellor Angela Merkel, what of it?

There's some masked soldiers who seem suspiciously well-trained in combat.

Like, "Oh, I thought it was just a masked man, but WHOOPS, it's definitely more than that."

What's up with the blonde guys who always seem to be seated on the throne?

Who's the rightful leader here? Something seems a little off. Maybe even incestuous.

Oh, and the main guy looks pretty good astride a horse.

And what's with all the dogs?

More like this
Twitter Was Saying The Same Thing About Sam Ryder’s Surprising Eurovision Result
By El Hunt
Taylor Swift, Kerry Washington & More Speak Out On Uvalde Mass Shooting
By Jake Viswanath
Photos Of Boris Johnson Drinking At A Downing Street Lockdown Party Have Surfaced
By Bustle UK
'Obi-Wan Kenobi' Takes Place After This Key Star Wars Movie
By Arya Roshanian
Get Even More From Bustle — Sign Up For The Newsletter