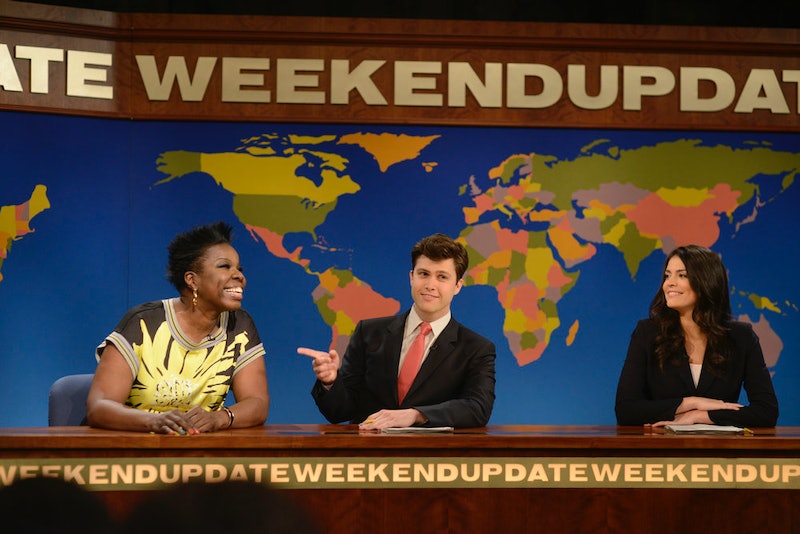 Andrew Garfield shone as the host of Saturday's episode of Saturday Night Live, complete with a surprise appearance from his too-cute girlfriend and Amazing Spider-Man 2 co-star Emma Stone. But as much as we all loved Garfield's performance, there was a disturbing bit buried in Weekend Update that should take precedence over the success of Garfield's first time hosting. Leslie Jones, one of the new black female writers hired by SNL, made an on-screen appearance on Update to discuss Lupita Nyong'o's Most Beautiful Woman in The World title, and her commentary took a dark turn when Jones started joking about slavery and the breeding of slaves.

To complicate matters further, Jones took to Twitter to publicly respond to criticism for the bit, tweeting:

And it saddens me that BLACK PEOPLE bitch and moan about the most stupid shit. I'm a comic it is my job to take things and make them funny.

It's not my place to say how Jones should interpret her history and her relationship with slavery, or how any black woman should process slavery. Jones made a good point in noting that a male comedian like Chris Rock, who has in the past made jokes about slavery, would probably not receive the same criticism or backlash. She also tweeted that the jokes she made came from a place of pain, which can't be denied, because her experience cannot be denied. But to make light of slavery in the blasé manner?

"I do not want to be a slave," Jones clarified to Jost, but what message does it send if a black writer on screen is making jokes about slavery and the breeding of slaves? Bringing the joke to a venue like Update might be misconstrued; it allows white members of the viewing audience to laugh at a deplorable ugliness in our collective past that continues to cause racial tension to this day. It allows white people to laugh at a blight in history that their ancestors were complicit in and responsible for.

Is there ever a "right" time to joke about slavery? I believe that there isn't, especially not in the way that Jones did on Update. But as someone who is not African-American, deciding what is right and what is not for an African-American comedian to discuss is not my place. Still, Jones' performance Saturday night was grossly hurtful, and many black critics agree, including Jamilah Lemieux of Ebony , who notes:

Black women are so often the butt of the joke. If any of us deserve to be protected from such, it is our ancestors who endured the indignity and dehumanization of slavery. Furthermore, sisters who have their own issues with dating should not have to deal with the indignity and dehumanization of another (hurt) sister making light of their pain for an audience of White folks, or anyone else, for that matter.

Satire is a difficult and complicated zone to navigate, but what made the segment unacceptable and truly distressing was the lack of any defining moment in which she made it clear that she was condemning the demons of slavery. Yes, it's important that SNL continues to diversify and keep their black writers, but does it mean more sketches like Jones' joking about slavery?