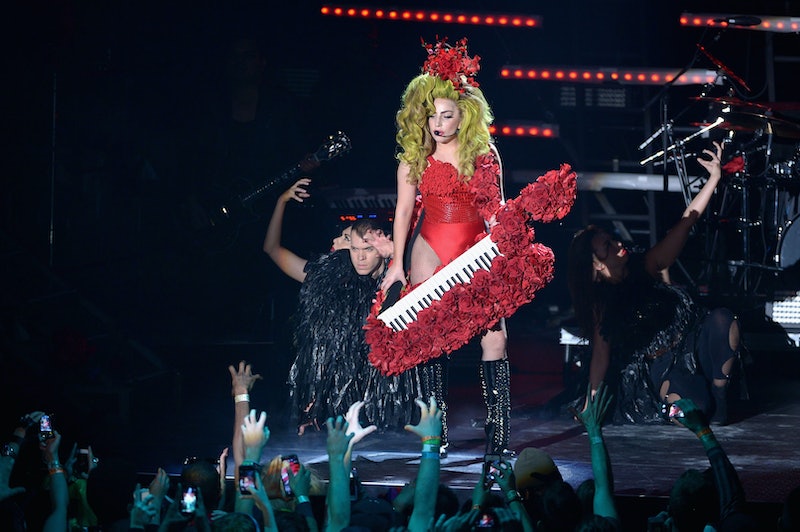 Little Monsters around the world just got a surprise: On Sunday night, Lady Gaga finally premiered the elusive, “PARTYNAUSEOUS,” at her first artRave: The ARTPOP Ball Tour stop in Fort Lauderdale, Florida. Gaga collaborated on “PARTYNAUSEOUS” with rapper Kendrick Lamar all the way back in August of 2012. Unfortunately, due to a conflict between Gaga and Lamar’s management team, the song's release was scrapped at the last minute. Fans have been waiting a long time to hear this record!

While “PARTYNAUSEOUS” was only used as a brief musical transition during Gaga’s show and we still haven’t heard the full song yet, it appears to have been re-worked to no longer feature Lamar’s verses. Many fans are already speculating that “PARTYNAUSEOUS” will be included on Gaga’s next “volume” of ARTPOP. Was the song worth the almost two-year-long wait? In a word: no.

Gaga told MTV Buzzworthy in August of 2012 that “PARTYNAUSEOUS” was about her “relationship” with Indonesia's capital city of Jakarta and wanting to “get high with the enemy” and make peace. Erm, OK? Basically, Gaga’s Jakarta Born This Way Ball Tour show was cancelled in June of 2012 due to complaints about her barely there attire and provocative dance moves. “PARTYNAUSEOUS” was written in response to that experience. "I don't mind if they a-arrest me, 'cause I'm wearing my Versace," Gaga defiantly sings on the song's first verse.

Admittedly, the tour audio we have of “PARTYNAUSEOUS” isn’t the best, but from what I can tell, the song is hardly the sonic revelation Gaga fans were hoping for. Like many of the songs on Born This Way and ARTPOP, the production sounds quite cluttered and frantic. Put simply, there’s just too much going on for me to really appreciate Gaga’s vocals or the song’s message. But as I said, we haven’t been given the opportunity to hear the full track yet, so I will reserve final judgment until then.

“PARTYNAUSEOUS” was supposed to appear on Lamar’s sophomore album, Good Kid, M.A.A.D City. It definitely has an “in your face” electronic sound to it, so I wouldn’t be surprised if Lamar’s team wanted to alter the production to be more in-line with the rest of his album.

But we may never know for sure.

More like this
How Lady Gaga & Adele Are Closer To The EGOT All Of A Sudden
By Jake Viswanath
Lady Gaga Will Star In 'Joker: Folie À Deux' With Joaquin Phoenix
By Jake Viswanath
Everything To Know About The Musical 'Joker' Sequel – & Lady Gaga’s Role
By El Hunt and Sam Ramsden
All Saints Didn’t Make Melanie Blatt “As Rich As People Think”
By El Hunt
Get Even More From Bustle — Sign Up For The Newsletter