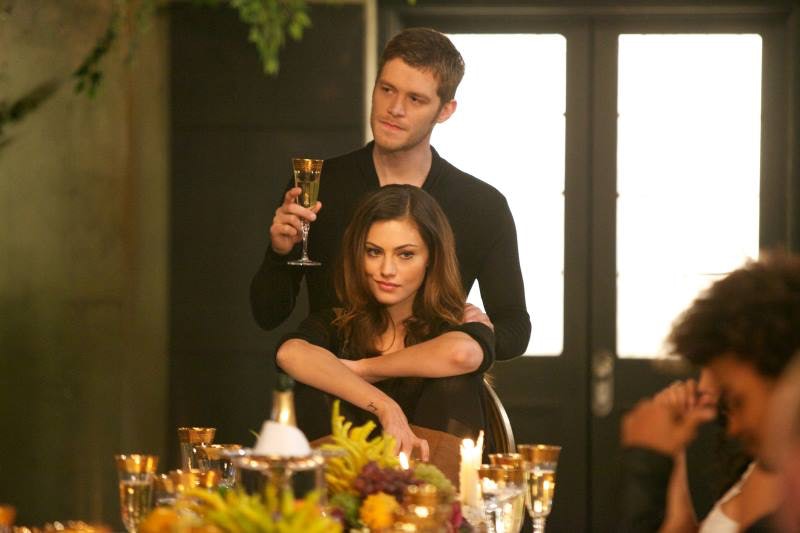 Whether you're a fan of The Originals resident werewolf or not, you can't deny that Phoebe Tonkin's Hayley Marshall, future mother of the world's first hybrid baby, is a total badass. Hayley's consistently proven that she's more than just Klaus' baby momma since her debut on The Vampire Diaries fourth season but she's really come into her own since moving to New Orleans. For example, during last week's "A Closer Walk With Thee," when she was the one to finally take down Mikael Mikaelson. I mean, Elijah definitely sees something in her, right?

Hayley's been a tough female character since she debuted in Mystic Falls with her own agenda, a #sorrynotsorry attitude, and an impressive love for snapping Caroline's neck. The orphaned werewolf wasn't like any of the female characters we'd seen thusfar — mostly because she totally DGAF about the drama. Which, considering what TVD is known for (love triangles, dramatic deaths, etc.), was a breath of fresh air to the series and kind of great to see a #bossbitch turn up and show everyone else how it's done.

So what does being a resourceful, tough-as-nails, born-leader werewolf with the most epic eyebrows on Earth mean for your offspring? Well, hopefully that she'll have epic brows too — but on a more serious note, that she'll probably inherit all of those badass traits. And hopefully only a few from Klaus because New Orleans definitely doesn't need a miniature version of that guy running around. Here are Hayley's top badass moments that prove that her soon-to-be-born hybrid daughter is going to take after her mother:

She Figured Out How To Break The Sire Bond

Back when Hayley first appeared on TVD, she'd helped Tyler break his hybrid sire bond to Klaus. She intended to do the same for 12 other hybrids to help Professor Shane — I know, not her shining moment. But, regardless, it was pretty epic of her to have figured out how to undermine that powerful magic and even more epic of her to not fear Klaus catching on and killing her for slowly depleting his army.

She Stands Up To Klaus

Hayley stood up to Klaus from day one on TVD and she still stands up to him on The Originals. She can take care of herself and she's not really interested in becoming Klaus' prisoner just so he can protect her. Hayley stood up to him when he ordered Marcel's vampires to massacre her extended family in the Bayou and then she just up and left the Mikaelson family home to go live with them. She does whatever she damn well pleases, whether Klaus likes it or not — and that's a huge deal, considering everyone else is too afraid of him to put a toe out of line.

And Calls Him Out

No one calls Klaus on his bullshit — well, no one except for Hayley. Seriously, Klaus, that's how you get girls? God, you're so predictable.

She's Not Into Your Drama

She made us all realize how petty Caroline and the rest of Mystic Falls actually was. Even if they did set aside their differences (mostly Caroline's differences and not really) to work together to keep Klaus in the dark about losing his hybrids. Hayley was just so much more mature than Caroline and she was so not interested in her drama and in stealing Tyler from her. She had much bigger things going on.

When She Mocked Miss Mystic Falls

Okay, Miss Mystic Falls was one of the worst things fans had to endure. It was archaic and brought out the absolute worst in the young women of Mystic Falls — and Hayley noticed. But what's more important is that she didn't hide her opinion about it. Hayley showed up at the event wearing an identical tiara to the one that the actual winner of the pageant would be given to more or less mock the whole event. Because, well, it was pretty dumb.

When She Basically Bitch-Slapped Celeste

This was epic — if I could watch pregnant Hayley knock Celeste out and then drag her around by her hair over and over and over again, I absolutely would. That's how badass this entire moment was.

She Finally Took Mikael Down

What is up with Hayley and taking down everyone's enemies while she should probably be on bed rest for her pregnancy? First Celeste and now Mikael during last week's episode — two characters that have found ways to torment the Mikaelson children for centuries and all Hayley had to do was knock one out with a stick and stab the other through the heart. Simple. So simple for a girl that's nine-months pregnant — don't even try to tell me that's not the definition of #bossbitch. P.S. You're welcome, Klaus.

More like this
'Obi-Wan Kenobi' Takes Place After This Key Star Wars Movie
By Arya Roshanian
Here’s Everything Coming To & Leaving Netflix In June
By Alyssa Lapid
Britney Spears Met The Weeknd & Sam Levinson, So She May Actually Be On 'The Idol'
By Jake Viswanath
Jack's Facial Hair Moments On 'This Is Us,' Ranked
By Grace Wehniainen
Get Even More From Bustle — Sign Up For The Newsletter