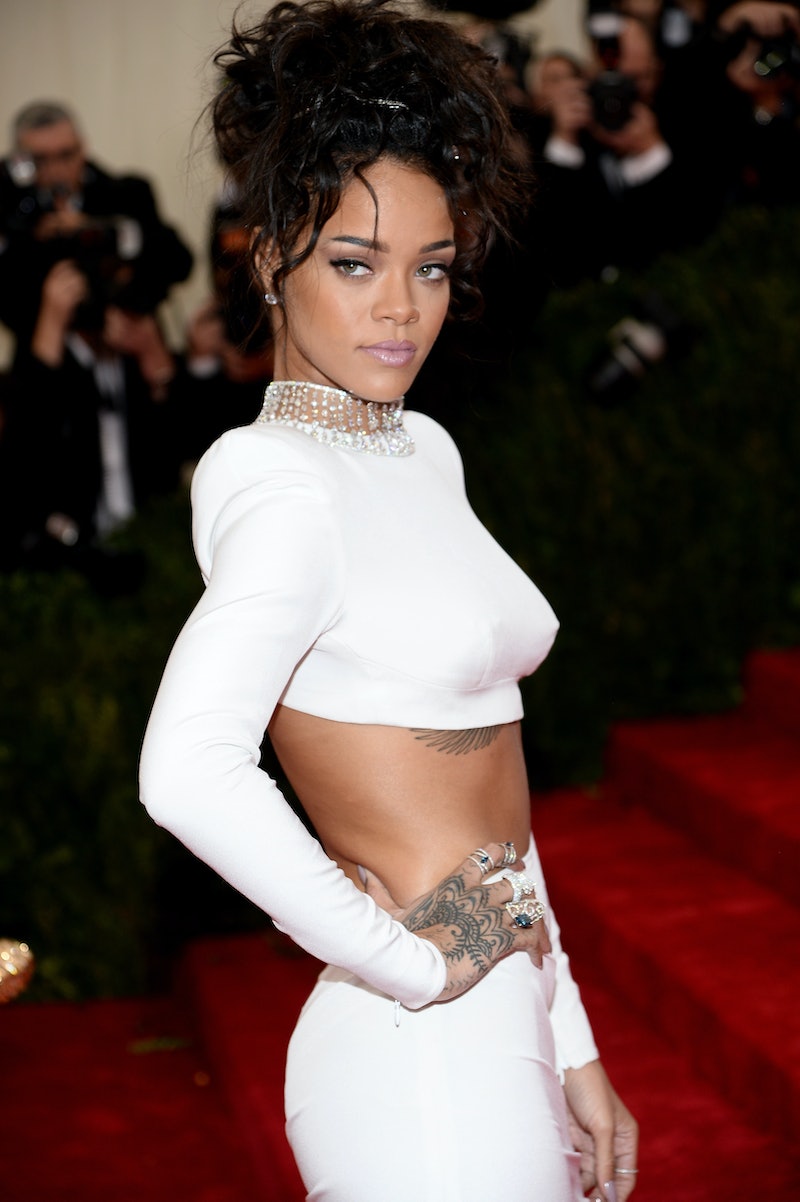 We're not by any means suggesting that Rihanna needs a man to accompany her on the red carpet., especially not when the "Stay" singer rolled up with Cara Delevingne and the Stella McCartney entourage, looking fabulous, I might add, to Monday night's 2014 MET Ball. But I couldn't help but wonder where Rihanna's alleged non-boyfriend Drake was. Is there trouble in paradise or are they just actually not dating and didn't want to fuel the fire with a red carpet debut?

According to reports from last week, Rihanna has switched to Jay Z's record label, Roc Nation after ending her lengthy partnership with Def Jam. Cool, cool, you do you, RiRi. I don't really think Drake is the jealous type — I mean, his "beef" with Jay Z isn't actually that serious so it's hard to imagine him flying off the handle over Rihanna's record label move. But maybe he was a little miffed about his girlfriend's new spot on HOVA's artist roster, hence the singer's solo walk down the red carpet. Or maybe Rihanna was all like, "I can take it from here. I know you want to watch the Stanley Cup Playoffs," because again, she doesn't need a man.

Either way, the fact remains that Drake was not in attendance at Monday night's MET Ball. And here are a few theories why:

He Was Too Sad About The Raptors' Playoff Loss

I mean, he was really jazzed up about them making it to the playoffs and taking on Jay Z's Brooklyn Nets. It was obviously a crushing blow for them to lose on Sunday night.

Jay Z Was Going To Be There

Drake was feeling a little embarrassed about his mini-feud with Jay and when he found out that the rapper would be there, he politely asked if he could sit this event out. Especially after the aforementioned basketball team showdown and his team's loss and Drake's hilarious and ridiculous court-side antics.

He Couldn't Find His Lint Roller

He Got Too High With Snoop Dogg & Missed His Flight

Early on Monday, Drake posted this photo of his father with Snoop Dogg. Now, I'm not accusing Drake — or his father for that matter — of anything. But things happen sometimes and maybe he smoked a little too much weed with the king of getting high and missed his flight to NYC for the gala.

He Was Watching The Hunger Games

He would die for his district, people.

He Was At A Hockey Game

If Drake was in fact in California yesterday, he was probably at L.A. Kings playoff victory over the Anaheim Ducks. He's not a fan of either team — but playoff hockey is playoff hockey and if you're a fan, you're all over that.

Kanye Asked Him To Sit This One Out

I mean, it wouldn't have made a great case for convincing Jay and Bey to come to the impending Kardashian-West nuptials if Kanye was palling around with Drake all night. Even though they're not aggressively feuding — I feud is a feud. And Kimye need Jay Z and Beyoncé at that wedding.

So where in the world was Drake on Monday night? Hopefully he didn't shoot RiRi a "just hold on, I'm coming," text and stand her up.