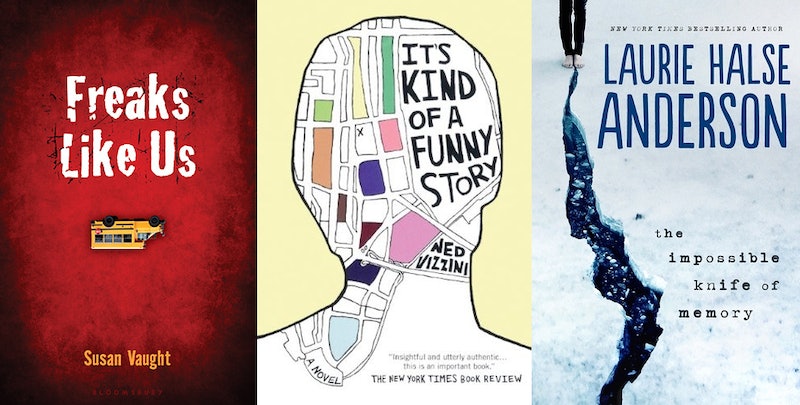 As is often discussed in the #WeNeedDiverseBooks campaign, sometimes the biggest way to stigmatize people is to not talk about them at all. People, particularly teenagers, who cope with mental health issues are often stigmatized because of this lack of realistic portrayals in pop culture. Mental Health Awareness Month is celebrated in May to reduce this stigma and promote awareness of various mental health issues.

According to the National Alliance on Mental Illness in 2013, approximately 20 percent of people aged 13 to 18 experience severe mental disorders in a given year, and half of all chronic mental illness begins by the age 14. Suicide is the third leading cause of death among people aged 15 to 25, and mood disorders, including depression, are the third most common cause of hospitalization in the United States for young adults. However, these stats may also be skewed low, because of the stigma around mental illness, some teenagers are reluctant to seek help. A National Institute of Health report said that this stigma can cause long delays from when a person experiences symptoms and reports those symptoms, despite available treatment options.

Books with characters that have mental health issues have the ability to help readers on an individual basis. It can help readers square themselves with the idea that they are not alone. Young adult novels, in particular, have a unique opportunity to create realistic representations of people with mental illnesses. One of the main themes of YA literature is characters that must situate themselves in the world as they search for a sense of identity. Mental illness has a way to dislodge a person's sense of self, forcing people to wrestle with their own sense of identity. It's an opportunity for YA novels to also wrestle with this issue with realistic characters.

These 8 young adult novels give realistic portrayals of people coping with a mental illness, and they help raise awareness in the hopes to reduce the stigma.

1. It's Kind of a Funny Story by Ned Vizzini

Author Ned Vizzini's personal struggle with depression inspired his beloved novel It's Kind of a Funny Story. Vizzini tackles depression in his young protagonist with humor, portraying his time hospitalized for his mental illness. Tragically, Vizzini committed suicide in the fall, but his legacy will continue to live on via his novel, one of the most realistic portrayals of depression ever written.

Travis Stephenson is a U.S. Marine who has spent seven months overseas in Afghanistan. He has a month-long leave, where he is allowed to go home to relax — but is it really that easy? Without politicizing the war, Trish Doller looks into the hardship soldiers (and their love ones) experience not just at war, but returning home with PTSD feeling out of place in the world.

But what has been done can't be undone. My best friend is dead and I'm never going to be the same Travis Stephenson.

Amy Reed takes a painfully honest look at the high highs and low lows of bipolar disorder in Crazy. Izzy and Connor meet as summer camp counselors, and the novel is told in alternating chapters from each of their voices as Izzy starts to descend into mental illness. Upon Crazy's release, the reaction was overwhelmingly positive, with my readers saying just how close to home Izzy's story hit. Reed doesn't romanticize mental illness, but she doesn't make it "other" either.

Even though I'm sleeping again, everything still feels a little rickety, like I'm here but not quite here, like I'm just a stand-in for my real self, like someone could just reach over and pinch me and I'd deflate. I thought I was feeling better, but I don't know anymore.

Susan Vaught's Freaks Like Us is a first-person account of two friends and their search for another missing friend. But the narrator has schizophrenia. Aside from being an author, Vaught is a psychologist and she has written a searingly honest, albeit funny, story about three friends, Jason the narrator, Drip who has ADHD, and Sunshine, who is selectively mute.

I'm told I don't think like other people, and I'm pretty sure that's true.

In both words and illustrations, Nina LaCour's Hold Still centers on Caitlin, as she reads notes in her friend Ingrid's journal. Ingrid recently committed suicide. The letters follow Ingrid's slow descent into depression, giving insight to readers who are suffering or who know someone who is.

The sun stopped shining for me is all. The whole story is: I am sad. I am sad all the time and the sadness is so heavy that I can't get away from it. Not ever.

6. The Impossible Knife of Memory by Laurie Halse Anderson

Laurie Halse Anderson, author of Speak , is never one to shy away from tough subjects. In The Impossible Knife of Memory , a teenage girl must cope with her soldier father's post-traumatic stress disorder (PTSD). On the surface, the father and daughter seem "normal," but they are fighting with issues underneath. The YA novel shows how mental illness can ricochet around a family, affecting everyone.

I swallowed the fear. It’s always there — fear —and if you don’t stay on top of it, you’ll drown. I swallowed again and stood tall, shoulders broad, arms loose. I was balanced, ready to move. My body said, 'Yeah, you’re bigger and stronger, but if you touch this, I will hurt you.'

John Green and David Levithan don't define will grayson (who only writes in lowercase) by just his depression. The authors are able to take a character with a mental illness and show how he may realistically cope with it day by day. They show will grayson as a stronger person because of how he thinks about and works through his own depression. Will Grayson, Will Grayson also offers a critique of how society's offhand use of "depressed" or "mental health" are not helpful for people who are diagnosed with mental illness.

“i think the idea of a 'mental health day' is something completely invented by people who have no clue what it's like to have bad mental health. the idea that your mind can be aired out in twenty-four hours is kind of like saying heart disease can be cured if you eat the right breakfast cereal. mental health days only exist for people who have the luxury of saying 'i don't want to deal with things today' and then can take the whole day off, while the rest of us are stuck fighting the fights we always fight, with no one really caring one way or another, unless we choose to bring a gun to school or ruin the morning announcements with a suicide.”

8. The Nature of Jade by Deb Caletti

Jade DeLuna is prone to panic attacks. Despite her logical reasoning, Jade becomes consumed with anxiety about her fatality and is unable to talk herself out of her panics. To calm herself, Jade watches live feeds of animals at the zoo. Deb Caletti's story The Nature of Jade creates a well-rounded, relatable protagonist, who doesn't want to be defined by her mental illness, and offers a realistic view of what panic attacks are like for those who suffer from them.

Or so we don't think about how we're just vulnerable specks trying to survive on a violent, tumultuous planet, at the mercy of hurricanes and volcanoes and asteroids and terrorists and disease and a million other things. We concentrate on having little thoughts so we don't have BIG THOUGHTS. . . . You've got to ignore the one big truth — life is fatal.

More like this
10 Must-Read New Books Out This Week
By K.W. Colyard
Zosia Mamet Opens Up About Her Eating Disorder
By Zosia Mamet
The 20 Best Audiobooks To Fall Asleep To
By Aoife Hanna and K.W. Colyard
Conversations With Friends' Endometriosis Scenes Are As Brutal As It Gets
By Ivana Rihter
Get Even More From Bustle — Sign Up For The Newsletter