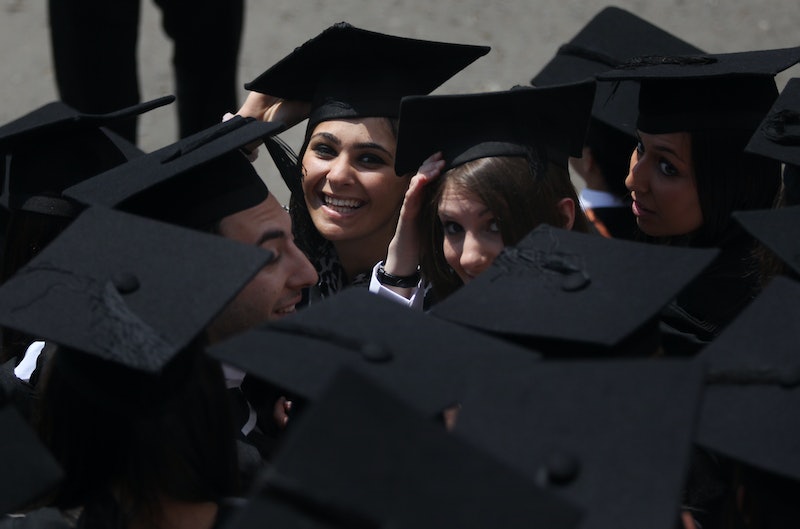 Are you between the ages of 13 and 20? Did your parents meet or remarry through Match.com? Do you or one of your friends or relatives know how to work a video camera? If your answers to all three questions are “yes,” then congratulations — you’re eligible for Match.com’s $50,000 MatchMade Scholarship!

By 2015, Match.com will have been around for a whopping 20 years. The site’s CEO, Sam Yagan, estimates that somewhere in the neighborhood of one million babies have been born to couples who met on it — a number that speaks to the mainstream acceptance of online dating. In celebration of those one million babies and all those matches, Match.com created the MatchMade scholarship. Why? Because the fact that one million babies exist because of the site is just. That. Amazing.

Yagan co-founded OKCupid in 2003; IAC, the company that owns Match.com, bought it in 2011, making Yagan Match.com’s CEO in the process. About nine months after creating OKCupid, Yagan told BuzzFeed, a user emailed him a thank you note and a picture, saying, 'I just had this OKBaby, thanks so much for introducing me to this guy.' “I’m a math guy, I don’t emotional about things, but I remember actually pausing and saying, ‘Holy shit, the stuff we do is really important,’” Yagan said. “Because let’s be real — the thing about dating is if there weren’t online dating sites, people would find other ways to meet and get married. But those specific humans are only the result of a specific pair we put together… those million babies literally wouldn’t exist.” I kind of imagine Yagan sitting in his office doing this:

Yagan also spoke to Mashable about the scholarship, saying, “When Match turned 18, it hit us that our first MatchMade kids are starting to go off to college. We’ve played a small role in these kids being born; now we’d like to play a small role in sending them off to college — and hopefully for years to come.” I think that’s rather admirable, and $50,000 is nothing to sneeze at. At the right school, that’s full tuition.

Now, bear in mind that it’s a contest, so only one lucky recipient will win the scholarship (and a $5,000 vacation for his or her parents). Entering is easy, though; all you have to do is create a one-to-two minute video telling your parents’ wildly romantic love story. Know, though, that good storytelling is key — according to the MatchMade website, “only the most creative, heartfelt and emotional videos will make the finals.” So go ahead and make something memorable, whether it’s a dramatic reenactment of Mom and Dad’s first date or a homegrown puppet show demonstrating how perfect they are for each other. Once you’ve shot and edited your video, submit it to MatchMade.com by June 30… and then wait around and hope for the best. Match.com will pick up to 10 finalists sometime in July; the finalists will be announced on August 18, and voting for the best entry will open up to the general public via video sharing tools and social media. The winner will be announced on September 1.

Also, Match.com made an adorable video asking a bunch of kids what they think about life, love, relationships, babies, and more promoting the contest. Why not kick off your afternoon with something super cute?