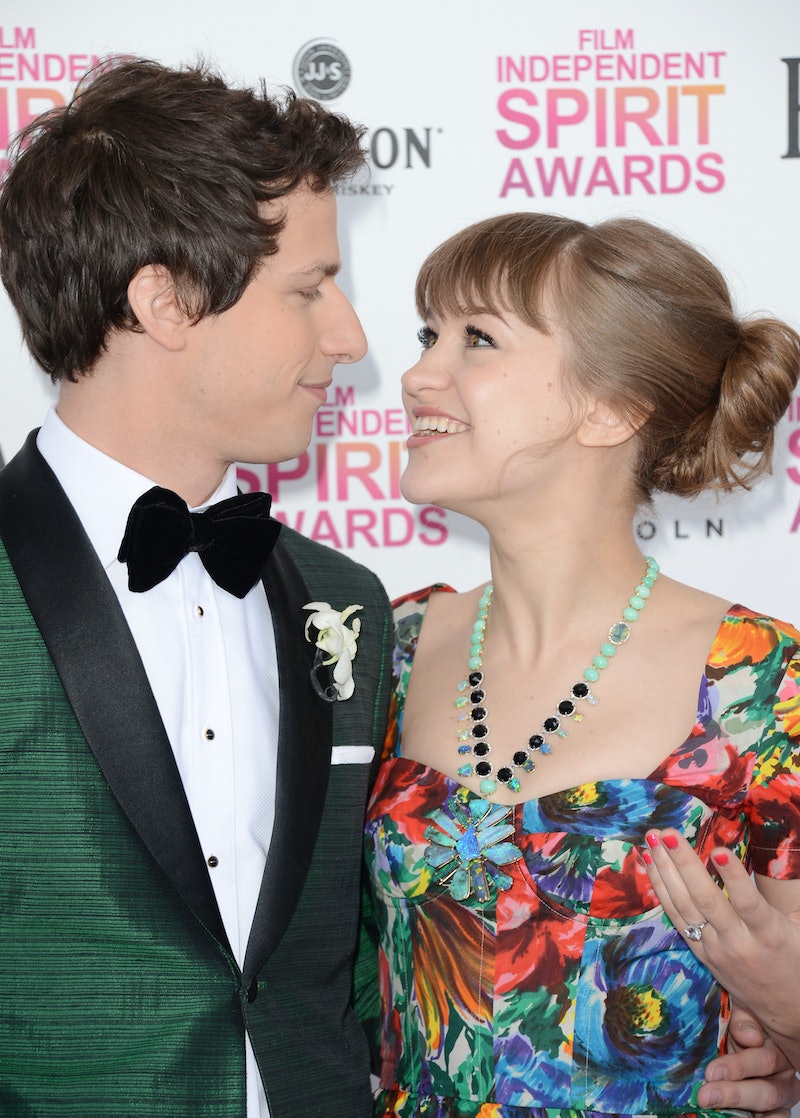 Sure, he keeps you laughing as the goofy detective Jake Peralta on FOX's Brooklyn 99 , but who does Andy Samberg turn to when he's goofing around at home? His partner in crime is none other than indie songstress Joanna Newsom. Samberg and Newsom met when Samberg attended one of her concerts, (a story we love because it means Samberg was starstruck by her as opposed to the other way around). After five years of dating, they went on to marry in Big Sur, California in September 2013, which means these lovebirds have an anniversary coming their way soon.

But for the love of feminism, don't call Newsom "Andy Samberg's wife." She is a singer-songwriter with serious musical chops. Her multi-instrument mastery extends to both piano and her signature harp. Raised by Bay Area progressive parents, Newsom wasn't allowed to watch any trash TV or listen to the radio growing up, but was surrounded by music instead. According to a piece in The New York Times , she asked to play the harp at age five, so she clearly has always kicked ass in the know-thyself department. While she's a star in the independent scene, she's also had several high-profile appearances on shows like Jimmy Kimmel Live!. In fact, she's so beloved, she even has her own tribute album. The album was released in 2010, where fellow indie artists covered her songs and donated the proceeds to Oxfam's relief efforts for the Pakistani flood of that year. Beauty, creativity, and humanitarian — what a package!

So it's no secret the serious songstress can weave haunting tunes that pull at our heartstrings and comprise our favorite mixtapes. But she's goofy in her own right, too. Newsom had a hilarious stint on Saturday Night Live cast member Mike O'Brien's silly closet Youtube series 7 Minutes in Heaven. Full of silly faces and a tiny toy keyboard solo, it really is the stuff of dreams.

Another of our favorite Newsom facts: while we're all in awe of her amazing talents, her biggest supporter is none other than her own husband, a self-described "superfan" of her music.

True to her creativity, Newsom also happens to be a fashion maven, with various corners of the internet dedicated solely to her fly style. Must see looks include her starry Vanity Fair party look and her funky tomato dress at LA Film Festival.

With so much going on, it's no mystery why we're girl-crushing on Ms. Newsom. So here's to Joanna- our favorite musician-with-a-silly side that you totally want to go dress shopping with. Or at least have a funny faces competition with in the mirror.