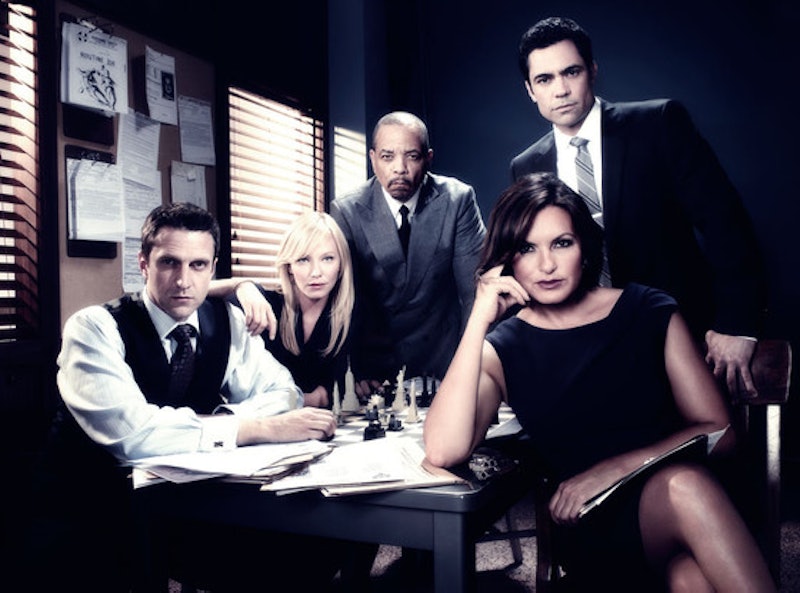 DUN-DUN: NBC has locked down the entire cast of Law & Order: SVU for a staggering and impressive sixteenth season. 16! As in 1-6. That's — to be frank — a shitton of television and a milestone for the network, to be sure. And while a round of applause or two is warranted, it's also far from a shocking development. Because of course this show was renewed. Of course! It's a Dick Wolf creation, and we all know his television shows basically print money, so it would've likely been more shocking if it hadn't been renewed at all.

But still, the renewal in and of itself — during this great rush to program the upcoming fall season — is news. Because people love three things unconditionally: television, cop stuff, and Mariska Hargitay. It's just not anything particularly crazy or unheard of given the fact that you and everyone else in the universe can recite that Law & Order: SVU intro by heart without cheating. ("In the criminal justice system, sexually-based offenses are considered especially heinous...") In fact, the whole thing is fairly self-explanatory: cop show does well, has been on forever, brings in tons of money for the network, still garners impressive guest stars, gets renewed. It's so un-shocking that we've decided to round up the 16 other things that are infinitely more shocking than this. Like..

2. ...That the Internet likes kittens.

3. ...Every time they show naked women on Game of Thrones .

4. ...Every time Taylor Swift writes a song about an ex-boyfriend.

6. ...This dildo-eating Cod fish (OK this one is admittedly pretty shocking).

9. ...That a dinosaur and Matthew McConaughey are friends.

12. ...The fact that anyone would choose yogurt to represent snacking.

13. ...That One Erection [One Direction-themed] condoms exist.

14. ...That One Directioners haven't already bought them all out.

16. ...And that we still, for whatever stupid reason and after all this time, can't seem to find the right starring vehicle for Christopher Meloni.

I mean, seriously though: what the fuck have we done wrong, television?