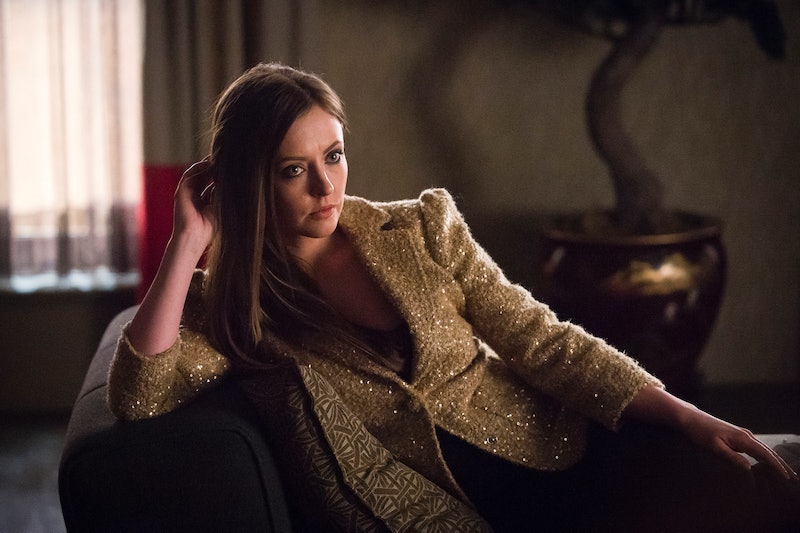 Things are getting crazy on NBC's Hannibal — and not everyone's thrilled with the direction the show is going, specifically when it comes to Margot Verger. On last Friday's episode, which saw Will (maybe) fall further and further into Hannibal's web, Hannibal's Margot's storyline also took a surprising turn when she — a lesbian — seduced and slept with Will Graham.

First, some backstory on Margot. In the novel Hannibal, Margot, Mason's sister, is a bodybuilder with a partner named Judy. They want to have a Verger child together, and, because Margo "shriveled [her] ovaries with all the stuff [she] took", they need Mason's sperm so Judy can do in vitro fertilization. Eventually, Book Margot goes about getting the sperm by stimulating an incapacitated Mason with a cattle prod before letting him choke on one of his pet eels.

TV Margot, on the other hand, is a perfectly fertile non-bodybuilder, who desperately wants to murder her abusive brother, played to repulsion by Michael Pitt. However, if he dies and there's no other male heir, the Verger fortune will go to the Southern Baptist Convention. She needs a son, but because Mason controls pretty much every aspect of her life, finances included, she can't exactly go to a sperm bank.

Instead, she has sex with Will, letting him unwittingly impregnate her in the hopes the baby will be a boy. Once a male heir is born, she can feed her disgusting brother to his bloodthirsty pigs without losing the money. (At least, I hope that's how he does it.)

The problem is that many of the show's fans were greatly offended by the use of the overused plot device of a lesbian sleeping with a man to get pregnant. Upset fans took to Twitter to express their distaste and in some cases, fans were downright outraged over the development.

Some point out that it's disrespectful to portray a lesbian sleeping with a man to get pregnant, because it plays into the idea that a gay woman can simply turn her sexuality on and off at will.

Others are put off at the idea that a woman would lie to and manipulate a man to get pregnant.

More like this
What Makes A Sally Rooney Sex Scene So Hot?
By Samantha Leach
Everything To Know About ‘The Handmaid’s Tale’ Season 5
By Amanda Whiting
What Does Michael Peterson’s Family Think Of 'The Staircase'?
By Arya Roshanian
The 'Grey’s Anatomy' Season 18 Finale Might Have Had A Sneaky April Easter Egg
By Grace Wehniainen
Get Even More From Bustle — Sign Up For The Newsletter