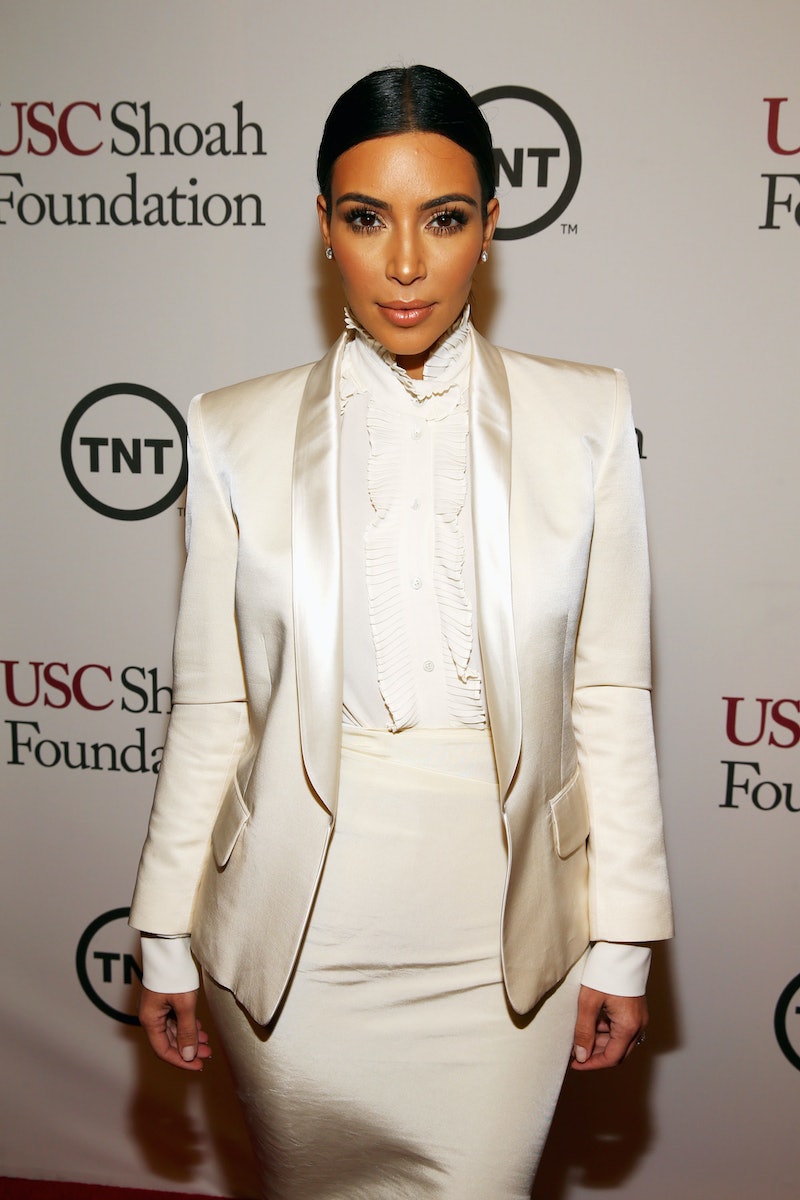 In an unexpected move, even to herself it seems, Kim Kardashian wrote a blog post about racism on Wednesday. If you are unaware that Kardashian even has a blog, that's not surprising and the posts aren't normally about such serious topics. She generally posts about fashion or throwback Thursday pics. In her new post, titled "On My Mind," Kardashian explains that after having North, she is seeing the world through her daughter's eyes and it has alerted her to the continued existence of racism. Kardashian writes,

To be honest, before I had North, I never really gave racism or discrimination a lot of thought. It is obviously a topic that Kanye is passionate about, but I guess it was easier for me to believe that it was someone else’s battle. But recently, I’ve read and personally experienced some incidents that have sickened me and made me take notice. I realize that racism and discrimination are still alive, and just as hateful and deadly as they ever have been.

Kardashian's point is solid — she doesn't want her daughter to grow up in a world where people are judged by the color of their skin, sexual orientation, or gender — but it's hearing her say she never thought much about racism is even more shocking than the fact that she wrote a blog post about it.

I want to give Kardashian the benefit of the doubt and say that she simply wasn't thinking hard enough when she wrote the post or that the racism she's sees through North's eyes is so much stronger than what she ever felt herself so she wanted to focus on that, but considering her life, neither of these options explain everything.

Kardashian is half white and half Armenian, so in America she's considered mixed raced. As a mixed person myself, it is always nice to see my skin color represented in the media, especially because it was rare when I was a kid. I know Kardashian isn't a typical role model, but I just mean something as simple as seeing her wear a nice lip color in a magazine and being able to say, "Hey, my skin looks like that, maybe that would look good on me." The fact that I've thought of Kim Kardashian in this way, but that she apparently hasn't, even though this had to be even rarer when she was a kid, is surprising. I went through years of school with other students asking me the question that every mixed child dreads, "What are you?" with the other kid assuming you'll know exactly what they mean. This isn't racism, but it does alert you to it and make you think about it often. Did this not happen to Kardashian? With the frequency that those questions occurred and how much they stuck with me, I find that hard to believe.

As for being Armenian specifically, there was a genocide in Armenia in 1915 that Kardashian is well aware of and that she posted a memorial for on Instagram in April. In addition to a photo with the number 99 for the years that have passed since, she wrote, "April 24,1915 it was 99 years ago today 1.5 million Armenians were killed in a massacre. Let's not stay in denial because it happened! Let's recognize it! #forgettingisntanoption #armeniangenocide."

As if that isn't enough, Kardashian's father, Robert, was O.J. Simpson's lawyer in a case that is famously race-related because of Simpson is black and his wife Nicole was white. Also, Kardashian was previously married to Kris Humphries, another biracial person.

It's great if Kardashian didn't strongly feel the effects of racism herself, but to be so personally connected to so many examples of that could potentially bring up awareness and to not have experienced it herself is unbelievable and to not mention them in her post is just, well, strange. Maybe now that Kardashian has opened herself up to talking about race, some of her own stories will start to come out. Again, if she doesn't have them, that's awesome, don't force anything, but I'm sure there's some young Armenian and mixed kids who would love to hear them if they exist.