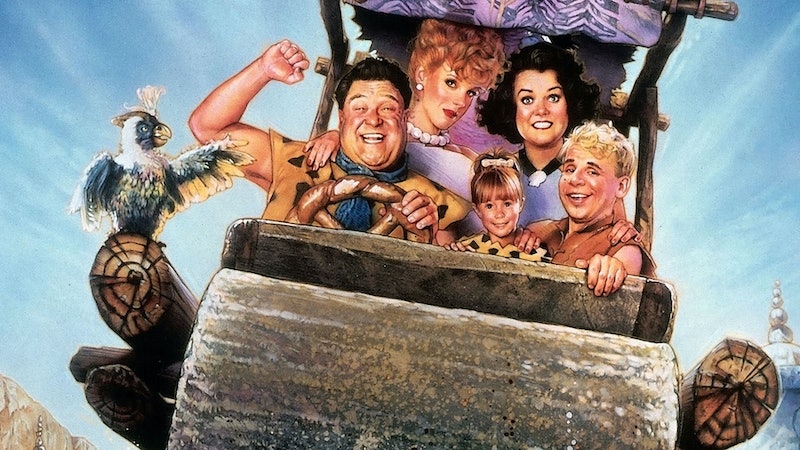 Stop what you’re doing right now because this is important news: Warner Bros. announced Wednesday that there is a new Flintstones movie in the works. Funnymen Will Ferrell and Adam McKay are executive producing the feature-length animated film, while their partner Chris Henchy is handling the script. I don’t know if you know this about me, but I am a Flintstones fanatic.

I’ve only watched a few episodes of the Hanna-Barbera cartoon, but I’ve seen the classic 1994 live-action movie about 7,864,998 times (a rough estimation). Ferrell and co. are great and all, and this new movie might end up being an enjoyable, nostalgic romp, but I can tell you one thing right now: it will never live up to the original live-action screen adaptation (and we’re just going to pretend like 2000’s The Flintstones in Viva Rock Vegas never happened, okay?).

It’s not that 1994’s The Flintstones is a great film or anything — when it comes down to it, it’s actually probably pretty terrible. But it’s terrible in all the right ways! This is a movie that somehow tricked 7-year-old me into having a crush on Rick Moranis. Yes, I had a crush on Rick Moranis. That’s some serious Hollywood movie magic right there.

Here are just a few reasons why this new animated Flintstones film won’t be able to top the original live-action one:

When it comes to the prehistoric town of Bedrock, live-action will always be funnier than animation. A major part of the live-action film’s appeal was getting to see all of the strange Stone Age creatures and contraptions from the cartoon brought to life! Remember that cute little dino-pig that acts as the Flintstones' garbage disposal? That thing was so cute! Thanks to the movie, I briefly wondered if I could actually purchase such an enchanting animal at PetSmart. It looked so real.

1994’s The Flintstones stars John Goodman and Elizabeth Perkins as Fred and Wilma Flintstone, Rick Moranis and Rosie O’Donnell as Barney and Betty Rubble, and Elizabeth Taylor as Pearl, Wilma’s mother. Oh, and the movie’s villains are played by Kyle MacLachlan (pre-Sex and the City) and Halle freakin’ Berry. The movie also features cameos from people like Jay Leno, Chris Rock, and Jonathan Winters. Like, what kind of dream team? I don’t care if Meryl Streep herself ends up voicing Wilma in this new Warner Bros. movie — no Flintstones cast will ever be this good.

For some reason, '80s new wave band The B-52’s agreed to make a guest appearance in the movie as the “BC-52’s" (get it?). Their song “The Bedrock Twist” is taking over Stone Age radio waves! It’s a seriously catchy tune, and you better believe I knew all the lyrics and could do all the choreography.

My secret’s out: all bird-related things are hilarious to me. This animatronic talking bird is everything: he’s a smart ass, he’s always tearing Fred down, and he kind of has a British accent. Unsurprisingly, he is my most-quoted movie character of all time.

The Script Had 32 Writers

You know how they say that two heads are better than one? Well, 32 different heads reportedly worked together on the script for 1994’s The Flintstones, and it still ended up being kind of a disaster! A wonderful, beautiful disaster. Apparently, adapting The Flintstones to the big screen is a tough task. Do you really think Henchy is going to be able to pull this thing off all on his own?

Breaking up a fight between Fred and her mother Pearl, Wilma exclaims, “You two should be ashamed of yourselves!” Pearl responds, “I’ve got my hands full just being ashamed of him.” And then Fred delivers the film’s most memorable line, “You’ve got your hands full when you scratch your neck!” Wait... what? Now, I’ve heard plenty of tasteless, unfunny fat jokes in my day, but this is the first and only fat neck joke I've ever heard in my entire life, and I think the movie’s 32 writers deserve a little credit for that.

Until this film, I had no idea that a person should be concerned about the size, shape, and all-around scratch-a-bility of their neck. This joke had profound impact on me growing up. Stole my seat at the lunch table? Move aside, fat neck! Cut in line for the drinking fountain? What do you think you’re doing, fat neck? I reserved the full “You’ve got your hands full when you scratch your neck!” diss for special occasions, like when somebody got me out during a game of dodge ball. I am not condoning such behavior — I was a terror and I probably hurt some feelings. For that, I sincerely apologize. Thankfully, my insult of choice was probably much more confusing to elementary school students than it was offensive. Oh, me.

If all of these reasons don't convince you that 1994’s live-action adaptation of The Flintstones is an untouchable classic, frankly, I don’t know what will. Oh, I forgot to mention that a pterodactyl takes a giant dinosaur-sized poop on somebody’s car in the movie. Yeah, that oughta seal the deal. I might give this new Warner Bros. Flintstones movie a shot, but I'm not expecting much. How can you improve upon perfection?