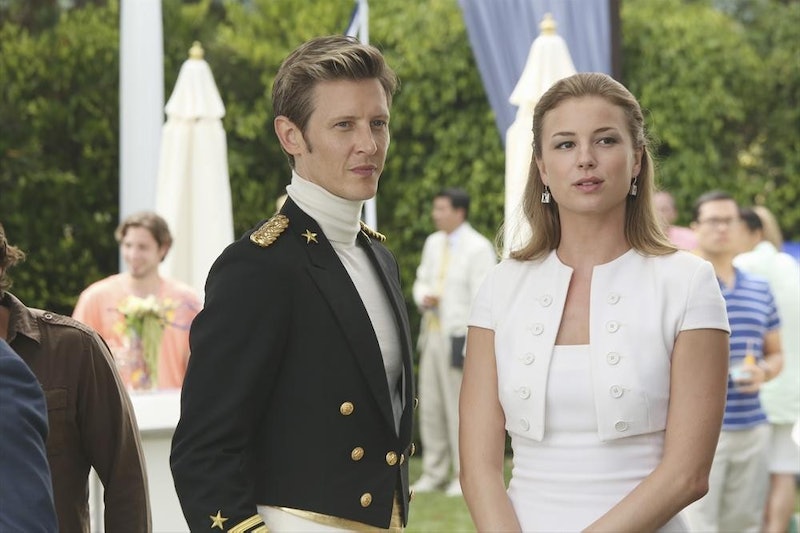 Now that we know who kidnapped Charlotte on ABC's Sunday night soap Revenge, we can focus on the bigger mystery which has cast a shadow on the series: Will Revenge be back for Season 4? The answer is thankfully a resounding "yes." Emily will get a little more time to exact her revenge and completely take down the Graysons, but the way we see it, Season 4 could be Revenge's last.

When the series first debuted in 2011 it was riding high and somewhere along the way, things took a turn for the worst. Fault has been fairly evenly distributed between the change from Wednesday nights to Sundays, and Revenge's Season 2 in its entirety. The third season saw Revenge turn things around a bit, but in its attempts to be the anti-Season 2, the series neglected to fix the main problem: The ridiculous for ridiculousness' sake plot lines. (See: Nolan parachuting into the Grayson party to sneak poison into Conrad's beverage.)

There's plenty of fuel to ask Revenge to just wrap it up already in Season 4, but there are a few reasons to believe that ABC will allow Revenge to live a long happy life (which on TV, is about six seasons). Emily will be, ahem, Victorious. Keep hope alive, everyone.

This is a weird reason to give for a series continuing on, I admit. But there is no reason to kill anyone when there won’t be another season now that Declan is gone and Ashley has been banished. Plus, showrunners in general are making more of an effort to provide viewers with closure and some kind of wrap-up. This is especially true when they are told ahead of time, and let’s be honest, the writing has been on the wall for a while now. The fact that they are killing people off signals some confidence (however small) on the showrunner’s part that Emily's mission has a lot more ground to cover.

We’ve been waiting for Victoria Grayson to uncover this one secret for the better part of 60-plus episodes. She finally knows, and now it’s over? No. Just no.

By finally making Victoria fully aware of the chess match at hand, the writers have opened up a way to change the game, which will hopefully convince the higher-ups that the show can find new life beyond the fourth season. It will no longer be Emanda on her secret vendetta. Everything will be out in the open. Victoria will quickly realize that her family and her life are under siege and she will react accordingly. What that looks like, we can only imagine. The shadows have always been Emily’s secret weapon. What will she do without the benefit of surprise? It’s unlikely Takeda's teachings covered how to lose gracefully.

The Reemergence of David Clarke

David’s been here all along, lurking in the background story. But there are new signs suggesting that maybe he is actually alive. Because, seriously, what motive would a weird creepy guy have for sending barely legible letters to Charlotte, a character the writers have refused to kill off, despite several opportunities?

Our heroine hasn’t had many wins as of late, and the Graysons have been damaged, but far from buried. If the overall motif here is linked to the old adage, "When seeking revenge, dig two graves," then mark this as another loss for Emily. The reveal of his being alive could make her unravel. She was angry in the first season, and she’s currently this weird blend of sinister and soft. It would be nice to see her try broken on for size. People love broken characters.

Still, this could also mean Season 4 will be Revenge's final ride: It would have been easy to persuade ABC to give the writers one more season to wrap up our hero’s fall. If that's the case, let’s just hope she takes everyone down with her (with the exception of Nolan, of course).

And if the worst is true, keep in mind that wrap-ups traditionally don’t take 22 episodes, so be on the lookout for news of a shorter season.