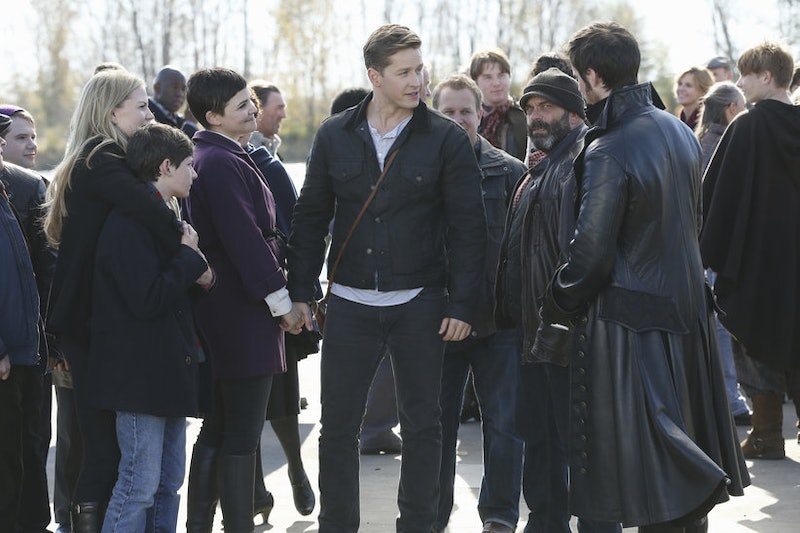 Confirmation has finally arrived — Once Upon A Time Season 4 is happening. And with Sunday's Season 3 finale just a few days away, it's time to start rounding up the spoilers because what kind of fans would we be if we didn't try to predict OUAT's happy ending? There's been a slow leak of details about where ABC's fairytale series is headed, starting with Once Upon A Time In Wonderland 's Knave of Hearts, Michael Socha, joining the series. But on Wednesday, Edward Kitsis and Adam Horowitz dropped some major spoilers to TV Guide that have us reeling.

Season 3 of OUAT spent half of the season in Neverland, made a year-long time-jump and took Emma and Henry to NYC, and introduced us to yet another one of Cora's offspring. It's been a busy 20 episodes, if you ask me. And with the two-hour season finale featuring yet another portal to the Enchanted Forest and a treacherous quest for Emma and Hook, we're almost certain that another finale cliffhanger is in store for the series. So what can we expect from OUAT Season 4? Based on Kitsis and Horowitz's interview, we've got three spoiler-based predictions for the return of our favorite fairytale series:

We're Going To A New Realm

But where is this realm? Kitsis told TV Guide that fans will "absolutely" see new realms next season — and now it's just a matter of which ones are their way. The recent announcements that Michael Socha would join the cast as a series regular has put Wonderland in play as a possible realm (even though it'd be kind of lame to go to the same land as the failed spin-off series). But there's also the matter of Prince Eric claiming that Agrabah is only a vast desert away from the Enchanted Forest and that series has yet to introduce Aladdin or any of his comrades yet. Oh, and we can't forget the showrunners' interest in having an Anna and Elsa from Frozen cameo on the series. But we won't have to wait long to find out where we're headed — Ginnifer Goodwin confirmed to TVLine that the final scene of Sunday's finale will set the trajectory for Season 4.

Our Prediction: With Hook and Emma being transported back to the Enchanted Forest on Sunday night, they're going to need help getting back home. My bet would be that they're headed to Agrabah to have Aladdin's genie get them back to Storybrooke. That would be a huge departure from any of the realms we've seen thus far and I can't honestly imagine Elsa being of any help to them in getting them home.

Again in their TV Guide interview, both showrunners confirmed with a resounding "yes" that Zelena, or The Wicked Witch, will return in Season 4. Which is funny, because it looked a hell of a lot like Rumpelstiltskin killed her on last Sunday's episode. I mean, being broken into a thousand little fragments seemed a lot like death to me. But, she will return — making OUAT another one of those series where characters refuse to die.

Our Prediction: Belle will be in serious trouble. There's no possible way that Zelena will come back more pleasant or rehabilitated. The first few episodes of Season 4 will definitely have to deal with the backlash of Rumpel killing her. And, unfortunately, Belle will be the one that suffers the most because she's the only person Rumpel has left.

Have you been wondering what happened to Mulan? It's almost unfair how we're introduced to the character, played by Jamie Chung, for an episode or two each season and then she disappears. Also, can someone explain why she, Aurora, and Philip are all always exempt from the curses flying all over the Enchanted Forest? It just seems unfair. But anyway, Kitsis and Horowitz confirmed that, though we won't see Mulan in the Season 3 finale, we will see her during Season 4. So yay, Mulan, you #badbitch!

Our Prediction: Eventually, Emma and Hook will link up with Mulan and the three of them will travel together. And OUAT will finally give her the screen time she deserves. Mulan's a skilled warrior and she's spent a lot more time hanging around the fairytale realms than these two over the past three seasons. If they're headed to Agrabah, Mulan will be a valuable ally is securing them what they need to get there and guiding them across that desert.