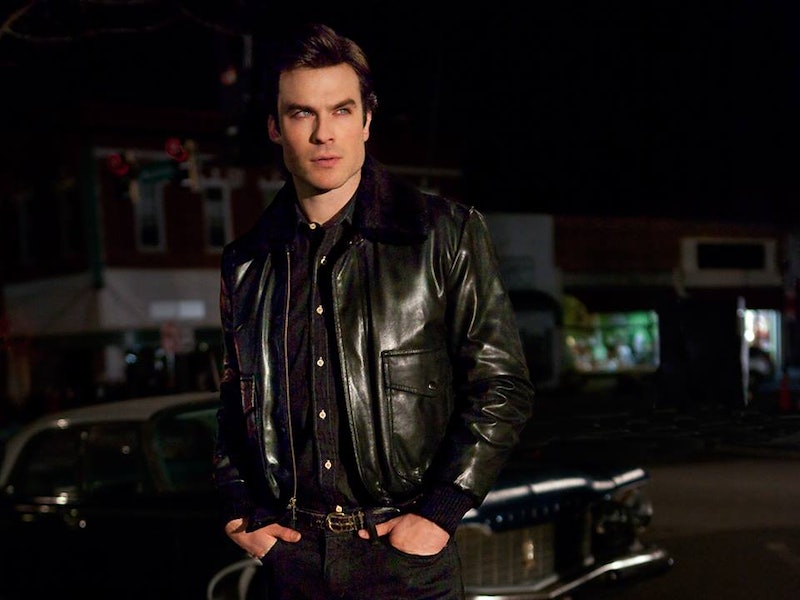 Could Julie Plec be pulling a double-Salvatore-whammy? On Thursday night, The Vampire Diaries did something big and kind-of-expected when they killed Stefan Salvatore. And we were all shocked (but not really) and sad (but not really) until we realized that there was no possible way that Stefan would perish for good. Now that the dust has settled, however, there's something else TVD fans should be concerned about — what if, for Stefan to live, Damon has to die?

It would be very J.K. Rowling of Julie Plec to go this route of the whole "neither can live while the other survives" plot. But perhaps it was her plan all along to get us all worked up over Stefan, to drop a bomb out of nowhere that it's actually his brother that's meant for death. Have I got your attention yet? The synopsis for TVD's Season 5 finale sets a pretty ominous tone for Damon, it begins:

Heartbroken by an unexpected tragedy, Damon (Ian Somerhalder) is focused on holding himself together, while pushing Bonnie (Kat Graham) harder than ever to find a way to stop the disintegration of the Other Side.

Okay, fine, it doesn't explicitly say that he's heartbroken over Stefan — but HE'S OBVIOUSLY HEARTBROKEN OVER STEFAN, HELLO. And, naturally, he's pressuring Bonnie to stop being the worst and get her shit together to return the world to its natural order. (Kind of hard to do with Enzo lurking around and distracting her, but whatever.) The synopsis then goes through what everyone else is up to in the wake of Stefan's death and then mentions Damon again:

With new information from Sheriff Forbes, Damon comes up with a dangerous plan that relies on split-second timing from Jeremy (Steven R. McQueen) and Matt (Zach Roerig).

Finally, Damon’s plan causes a massive explosion in Mystic Falls, and everyone is caught up in the confusion, leaving a trail of heroism, sacrifice, relief and despair.

Heroism and sacrifice are the two words jumping out at me here — it would be so like TVD to give Damon the ultimate shot at redemption by allowing him to sacrifice himself to save his brother. Right? I mean, I guess, but there would be sobs heard around the world because what is TVD without Damon Salvatore? Don't answer that yet, because we have more to discuss — it seems like Ian Somerhalder might have been hinting at this all along, but we refused to believe it.

In an interview with E! on May 1, the actor said, when pressed for Season 5 finale spoilers, "When Damon dies it's actually the dopest thing." Would Somerhalder be that bold to tease his own death but know that it's too outlandish for us to believe it? He went on to say that there are some "cool" things that will happen between Damon, Bonnie, and Elena and that they're things we don't expect. Bonnie is in technically on the case of saving The Other Side — so this sounds troubling. Mostly because TV Guide teased on Apr. 29 that "it will be Damon's big moment with another lady in Mystic Falls that will have people talking after the finale airs." So, if we read between the lines of Somerhalder and TVGuide's semi-spoilers, it's obvious that Bonnie is the other lady, right? I don't want to jump to conclusions but I totally will right now — Damon is absolutely going to die.

We know, from Paul Wesley's 2012 interview with Mr. Porter that the cast had signed six-year contracts — meaning, if Stefan is safe then so is Damon. And it does seem likely, considering Enzo is trapped on The Other Side, that Damon would head over there to hang out for a little while, making the goal of Season 6 to bring him back to the world of the living. We don't want to make assumptions, but Wesley did tell TVGuide:

[The finale] definitely establishes new parameters in the environment we'll be shooting in Season 6. They reset things in a way, and the writers have the ability to now change the circumstances and locations of where the show takes place.

Sounds a lot like they'll be working between planes, right? All signs from the synopsis to Somerhalder, Wesley, and TVGuide's teasers about what's ahead for Season 6 point directly to one thing — Damon Salvatore joining the spirit world. And as sad as I am to say that, I can already tell you that they wouldn't be going there for no reason — like, Stefan, Damon will obviously return. Because there is no Vampire Diaries without the Damon-Elena-Stefan triangle — otherwise they'd have to find a girlfriend for Matt or something and that would be just weird.

Plus, Damon probably won't feel bad about dying, if that helps you accept his fate a little easier.

More like this
Does 'Locke & Key’s Ending Mean There Could Be A Season 4?
By Sophia Moore
Shital Dropped Major Hints About Her Relationship With Niraj After 'Indian Matchmaking'
By Brad Witter
'The Bachelorette' Season 19 Schedule Shifts To Tuesdays During Fantasy Suites
By Kadin Burnett
An Ultimate Guide To The Music Of 'Rap Sh!t'
By Brad Witter
Get Even More From Bustle — Sign Up For The Newsletter