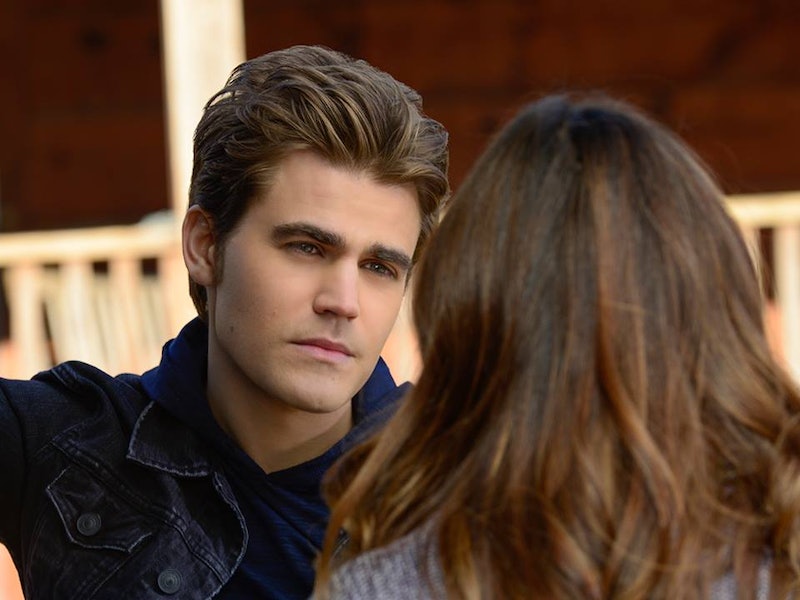 [Warning: If you haven't seen Thursday night's The Vampire Diaries, there will be major spoilers ahead.] Don't get yourself too worked up just yet. Thursday night's penultimate episode of The Vampire Diaries Season 5 brought a major shocker that I'm going to go ahead and say none of us saw coming. Okay, fine, some of us were obsessively putting the pieces together to predict this death but we didn't think they'd actually go there. The series killed off one its main three characters — no, I'm not talking about Elena Gilbert (I wish) — Stefan Salvatore is technically dead. But will it last very long? Absolutely not.

So, Stefan got his heart ripped out by Julian, the traveller currently taken up shop in Tyler's body. It was uncool and we were really moved to tears by Caroline's screams for help while Stefan's heartless body turned gray. Getting lost in the moment, I have to admit that I was kind of like, "WHAT THE HELL," and then got really sad because I like Stefan. Even if he whines a lot. But then I realized something very game-changing and life-saving, if you will — no one on TVD stays dead for very long and especially not if they're part of the main cast. And after scouring the Internet (and remembering how many times Bonnie and Jeremy have died and come back), I realized that there was really nothing to worry about.

This "death" was just a speed bump in Stefan's journey on the series.

There's irrefutable evidence that suggests that the death of the younger Salvatore brother is only temporary. So wipe away your tears because we're about to save you from a few days of mourning. Back at Paleyfest in March, showrunners Julie Plec and Caroline Dries hinted that there would be some tough times ahead for Stefan Salvatore. And if we'd paid more attention, we would have known this shake-up was coming — Dries told the panel that things "get even worse for Stefan toward the end." So I guess you could saw we all had fair warning that shit was going to go down in Mystic Falls. But should we be worried?

Not. At. All. When asked about Katherine Pierce's death at the same Paleyfest panel, Plec told fans that TVD's motto about death is more or less, "Never say never on our show." Which is basically like saying, "Never say never will Stefan Salvatore die and come back from the dead." I'm sorry if I sound a little callous, but TVD lost its ability to shock me when Bonnie and Jeremy came back to life for the 19th time. No one — and I mean NO ONE — stays dead on TVD. They always find a way to come back and with all of that Other Side drama and Bonnie's mission to find a spell to save everyone, I'm more than convinced that we'll have a living, breathing (well, kind of) Stefan Salvatore back in no time.

And, guess what, people — that is 100 percent true. In May 2012, Wesley did an interview with Mr. Porter, during which he told the online publication:

We have six-year contracts. I hope the show will go on for that long but it's such a peculiar business. I always thought The OC would be on for years and then it got cancelled after the fourth season. We're all looking at other things to do in the future and searching for different roles.

He really didn't try to bury the lede there — TVD's stars have six-year contracts. So, contractually, we still have one more season of Stefan Salvatore's brooding before he can legally leave the series. He might be floating around in ghost world, but he'll still be there.

In addition to this, even though we don't really need any other proof that Stefan will return — TVD is The CW's highest rated series. And it's experienced a 25 percent spike in digital viewings since last year. Basically, TVD is The CW's bread and butter, so there's no way they're going piss its loyal fanbase off by killing off a major character after a year of stellar ratings. Like these fans, for example:

There's no way the network would risk killing its most popular series like this. It'd be like, social suicide. So, rest easy TVD, Stelena, and Paul Wesley fans because Stefan Salvatore isn't leaving The Vampire Diaries. And he's definitely not staying dead.