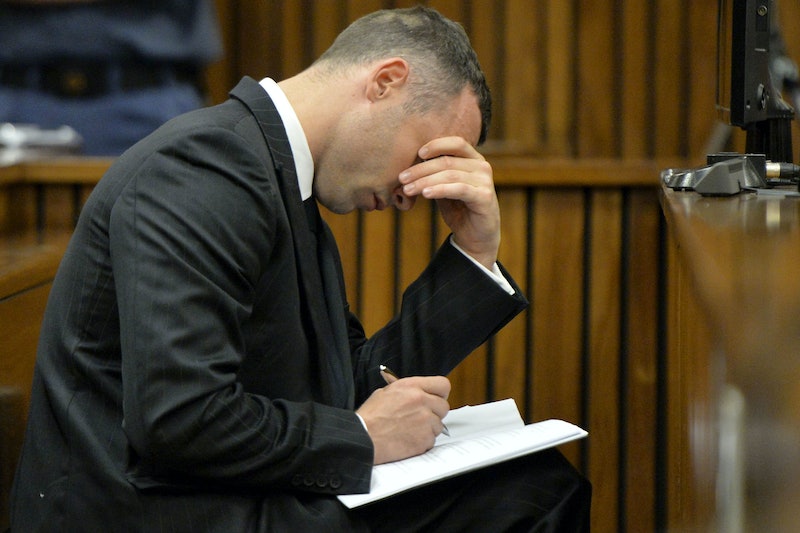 The Oscar Pistorius trial saw a big twist Monday: Dr. Merryl Vorster, who may be the defense's final witness, testified that Pistorius suffers from generalized anxiety disorder. While Pistorius' defense team, spearheaded by Barry Roux, intended this testimony to prove that the athlete acted "reasonably" within the parameters of his anxiety, the diagnosis may have unintended consequences: The prosecution has now requested Pistorius undergo a 30-day psychiatric evaluation in a private facility.

According to Dr. Vorster, Pistorius' anxiety results from a series of compounding factors, including the amputation of both his legs at 11 months old; his mother's death at 15 years old; and his estrangement from his father at 21. Moreover, the athlete's meteoric rise to fame after the 2012 Olympics may have contributed to a worsening psychiatric condition. Pistorius' habit of sleeping near or with a gun may have been prompted by his own mother's habit, who slept with a gun under her pillow, Vorster said.

During her testimony, Vorster pointed to "escalating levels of anxiety" that made "Mr. Pistorius...a mistrustful and guarded person." Due to his anxiety disorder as well as his physical handicap, Vorster told the court she believed Pistorius would be inclined to fight rather than run away if he perceived something or someone to be a threat.

How the defense wants to use this argument

Dr. Vorster is Barry Roux's witness, and her testimony was meant to show that Pistorius' anxiety caused him to perceive and react to threats differently than most people. Much of Vorster's testimony relied on the overwhelming influence Pistorius' mother had on the young athlete, particularly during his formative teenage years. Pistorius himself has cited the enormous impact his mother had on shaping both his life and his perspective, saying "Everything I learnt in life, I learned from her."

According to Vorster, Pistorius' mother developed a dependency on alcohol after divorcing Pistorius' father, and told the Pistorius children "to see their external environment as threatening," thereby worsening Oscar's already problematic anxiety. Pistorius' heightened sense of danger, said the psychiatrist, could be attributed to his disorder, and meant that even when there was no real threat present, Pistorius still could have felt unsafe. And given his inability to flee in a risky situation, Pistorius would always opt for the "fight" option in the fight-or-flight response.

The defense's claim is that Pistorius acted in line with his anxiety, and therefore behaved as reasonably as he could have, given the circumstances and his mental disorder. In this case, Pistorius truly made a mistake when he shot and killed Steenkamp, believing himself (and her) to be in immediate danger, and responding aggressively but accordingly with his anxiety diagnosis.

If Judge Masipa is to believe this version of events, Pistorius would be in an excellent position to attain a culpable homicide verdict, rather than murder or premeditated murder. But the argument may not work in Pistorius' favor.

How the prosecution wants to use this argument

Gerrie Nel, no stranger to ripping Pistorius and his version of events to shreds, similarly damaged Dr. Vorster's testimony, and the psychiatrist's evaluation of Pistorius' mental state may backfire on the defense.

Nel said on Monday that he had "no other option but to ask for a study of Pistorius' mental health" given Vorster's claims, and will file an application for psychiatric evaluation on Tuesday. If Judge Masipa agrees that such an evaluation is necessary, it could throw Pistorius and his defense for a serious loop.

Currently, the wait list for South African mental hospitals is approximately six months long. The evaluation itself would take an additional month, which means that the trial could be delayed for seven months. This would send the trial into 2015, and Pistorius still would not know his fate as sending him to a state hospital would delay a verdict.

If, on the other hand, Pistorius is not ordered to comply with a psychiatric evaluation, this would suggest that Judge Masipa does not believe Pistorius to be considerably incapacitated by his anxiety, which would force Roux and his team to downplay the extent to which they use Pistorius' disorder in his defense.

During cross-examination, Nel asked whether the anxiety disorder would be used to attempt a lesser sentence for Pistorius, which is possible in South Africa. However, it is unclear whether the defense will be using this route. When questioned by Nel, Dr. Vorster did concede that Pistorius was still capable of differentiating between right and wrong, and furthermore, that someone with his levels of anxiety would be a danger to society given his access to guns.

If Pistorius doesn't undergo observation, the defense could finish its case as early as Tuesday, after which both sides would be given the opportunity to prepare and present closing arguments. Barring any further delays, a decision is expected from Judge Masipa by July.