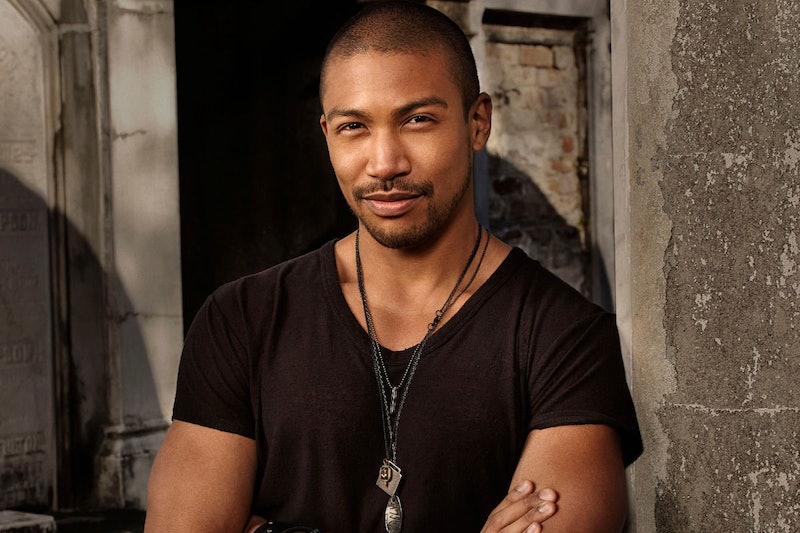 Can you believe that we're already at the end of The Originals' first season? I can't — mostly because I'm not even close to being sick of this show yet and am actually sad that its season finale will air on Tuesday night. After last week's bloody, game-changing episode left everyone in peril, The Originals will return with "From a Cradle to a Grave". And, according to Joseph Morgan, it's going to pick right up where it left off and shock us while it's at it.

Unlike previous synopses for episodes throughout the season, the synopsis for The Originals' Season 1 finale is strikingly vague. But, as a self-proclaimed Originals expert that can definitely see the future better than Genevieve, I've been able to come up with a few finale predictions. Of course, I expect "From a Cradle to a Grave" to shock us all and leave us sobbing over having to wait until Fall 2014 for the series' return. (I'm still trying to recover from Klaus' epic failure last Tuesday.) Either way, here's what we're working with on Tuesday night, the synopsis for "From a Cradle to a Grave" reads:

MOTHER AND CHILD IN PERIL — As the baby’s due date draws near, Klaus and Elijah embark on a search for Hayley, while Hayley herself is determined to do whatever it takes to keep her unborn baby safe and away from the witches. Francesca takes a meeting with Oliver and Jackson to determine the future of the werewolves in New Orleans. In the aftermath of a surprising attack on Marcel and his vampires at the compound, Davina and Cami join resources to take down Klaus. Finally, in a desperate move to protect those most important to him, Klaus makes a heartbreaking decision.

So we've got a lot of things, or rather, supernatural beings, at play here — werewolves, witches, vampires, hybrids, humans — and that's just naming a handful. Now for those predictions:

Davina and Cami are joining forces to take down Klaus? Well, there's no way they're doing that without the help of ever-lurking Mikael. The manipulative Original dad really got under Davina's skin last week by convincing her that Klaus never intended to keep Josh alive. And now she's totally going to figure out how to bring him back and Cami's going to help. When are we all going to learn that bringing back dead supernatural beings is the WORST POSSIBLE SOLUTION TO A PROBLEM? C'mon, Davina and Cami. C'mon.

Elijah Will Confess To Kissing Hayley

And it's going to be okay. It had to happen eventually and Morgan actually teased the reveal to TVLine, saying that Klaus isn't going to take that news very well. Because, like I said earlier — Klaus needs to be the center of attention and if there's anything he hates, it's sharing the love of his siblings with outsiders. Even if that outsider is carrying his child. But if the sneak-peek stills that the CW recently released for the upcoming finale are telling, it looks like Klaus and Elijah might actually bond over this situation. You know, rather than Klaus driving a White Oak stake through his brother's heart.

Jackson Will Tell Francesca To Shove It

Crazy-eyed Oliver might be easily manipulated by fear-tactics into joining packs with the woman that bombed innocent Crescent wolves, but Jackson won't go down that easy. Francesca can take as many meetings as she wants and try to determine the fate of the wolves as if she's everyone's queen, but Hayley's betrothed is just going to tell her to stick it where the sun don't shine. She did steal their magic rocks and aggressively broke the treaty — oh, and killed a significant number of their family members. (What a bitch.) Jackson might have been using Hayley for political connections before, but he's got enough moral high ground to not get mixed up with these gangster wolves.

I know, I know, but hear me out, people. I could be totally wrong here but I have a feeling that Marcel's in for a rude awakening from his surrogate dad. We already have confirmation that someone will die on Tuesday night's episode — which is fine, but because of the drama with The Other Side, there's no guarantee that they'll stay dead. Morgan teased to Zap2It about the Season 1 finale about the Season 1 finale that it would include both no fear in killing off a character nor in having another character do something that would make them extremely unpopular. So, let's think about this — Klaus would be heartbroken if he actually had to kill his surrogate son and it would make him wildly unpopular with fans for doing it. (Even if Davina will obviously bring Marcel back right away.) The pieces make sense, don't they?

The Baby Will Survive

There's just no way The Originals is going to go the route of actual newborn sacrifice. That would be exceptionally macabre and totally unnecessary. The witches will absolutely scare the crap out of Hayley, Elijah, and Klaus, but ultimately, that baby will live. Mark my words.

"From a Cradle to a Grave," even with it's vague synopsis, is shaping up to be a shot heard around New Orleans. Or, around the world if you're an Originals fan whose life revolves around Tuesday nights and whether or not Klaus will rip someone's throat out. Can't Season 2 just start next week?