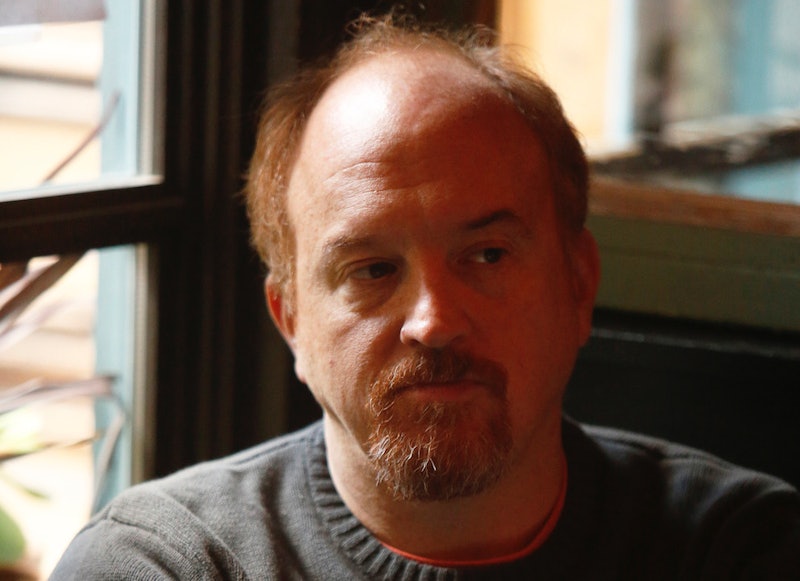 For years, beloved comedian Louis C.K. has made money off of talking candidly about his physical appearance both in standup and on FX's Louie . He's got standup routines about being a "fat shit" whose pants are so tight they just hurt, about being a 40-year-old man who gets "tits" for the first time, and about how beautiful women are never that into him because he's a self-professed unattractive dude. Yet, somehow, even after he talks about how "every time I shit, it's an emergency" we still find women obsessing over him, to the point where one writer even laid out 17 whole reasons she would love Louis C.K. to be her boyfriend. But Monday night, this counterintuitive phenomena got its ass handed to it by Louie guest star Sarah Baker.

"So Did The Fat Lady" introduced Louie to a waitress at the comedy cellar after a standup set in which he declares that he "loves women" and that women have amazing rejection techniques. Go figure that the rest of the episode would treat us to Louie's own terrible rejection techniques, dropped haphazardly upon the Comedy Cellar's newest waitress Vanessa (Baker) who's got a sparkling wit and absolutely none of Louie's attention.

She tries, with remarkable pluck and positivity, to get Louie to grab a drink with her, but time and again, Louie simply grumbles and finds a lame excuse to get out of it (see: Louie's terrible rejection techniques). Finally, Vanessa gets a full time job that allows her to leave the waitressing gig and as a parting gift to Louie, this man who continually rejects her, she offers rink-side seats to a Rangers game. Louie can't say no, but he does feel guilty and from that guilt comes the words Vanessa had been hoping for all along: "You wanna get some coffee with me?"

Vanessa does a giddy little hop and if we'd missed the last 10 minutes of baseless rejections, it would almost be endearing, but the unspoken truth is about to raise its head. After what is basically the perfect New York date — wandering around the city, exchanging personal anecdotes and silly jokes — Vanessa and Louie land on the topic of dating, and she remarks that it's tough to date as a "30-something fat girl in New York City" to which Louie replies, dutifully, "You're not fat." What follows might the most honest, engrossing, moving speech ever uttered on television — not because it's dramatic or involves some dangerous or devastating circumstance about some topic like meth dealers in Albuquerque or depressed ad men on Madison Avenue, but because it's the first time an everyday concept like what it's like to be that "30-something fat girl in New York City" has been given any time, attention, or respect on the small screen (or any screen, for that matter).

"That is so god-damned disappointing," says Vanessa. "Do you want to know the meanest thing you can say to a fat girl, Louie? That she's not fat." And while this truth is perhaps the most surprising piece of her speech — as she says, she's not "supposed" to tell people this because it's "too much" for them — it's the moment in which she highlights how unfair the gender divide is when it comes to the concept of "the fat girl" that really gets at the truth:

"You can write jokes about how you can't get a date because you're overweight and it's adorable, but if I say it, they call the suicide hotline on me. I mean, can I just say it? I'm fat. It sucks to be a fat girl. Can people just let me say it? I'm fat. And it sucks. It really sucks... Why do you guys hate us so much? What is it about the basics ... that makes us so unattractive? ... Come on, if I was a very, really, beautiful, then you would have said 'yes' when I asked you out. I mean, come on, be honest here ... Guys like you never flirt with me, because you get scared that maybe you should be with a girl like me. And why not?"

Louie stands by in stunned silence. He, like most people making up audiences of chuckling folks amused by Louie's candor about his physical form, had never thought about the disparity between his privilege as an overweight man and the hushed silence around the concept of being an overweight woman. He'd never realized that there was this other side where joking about one's physical form didn't counteract people's perception of that form, a place where humor doesn't make life easier, a place where the truth is "supposed" to stay hidden so everyone else can feel more comfortable without any consideration of what the woman at its center might feel.

Louis C.K. and his show did something extremely important with this episode by almost taking Louie out of this scene completely. He's there, he's listening, and he's trying to understand, but for once, we're not musing at the unfortunate life of a 40-something, overweight comedian in the East Village. We're not thinking, "Wow, this must be so uncomfortable for Louie" or worse, as has been the case with past straight-talking women on Louie , "Wow, this woman is really giving it to poor ol' Louie." We're looking through Vanessa's eyes, we're hearing her perspective — a perspective that's been deemed uncomfortable or impolite. Instead, Louie is giving his privilege to "the fat girl" in this episode. He's allowing her to do exactly what he does: He gets to say "Fuck it. So what if you're uncomfortable?" every time he airs an episode of his show or gets on a stage to do standup and now he's giving that spotlight to Baker's Vanessa, and by proxy, "the fat girl."

And though, by the time Vanessa dares Louie to hold her hand and walk along the water with her (he accepts, eventually), we know this short-lived guest stint isn't going to deliver us episodes upon episodes of Baker's incredibly candid speeches, its effect is one that will not only be felt throughout the remaining episodes of Louie, but (hopefully) throughout the world of television itself.