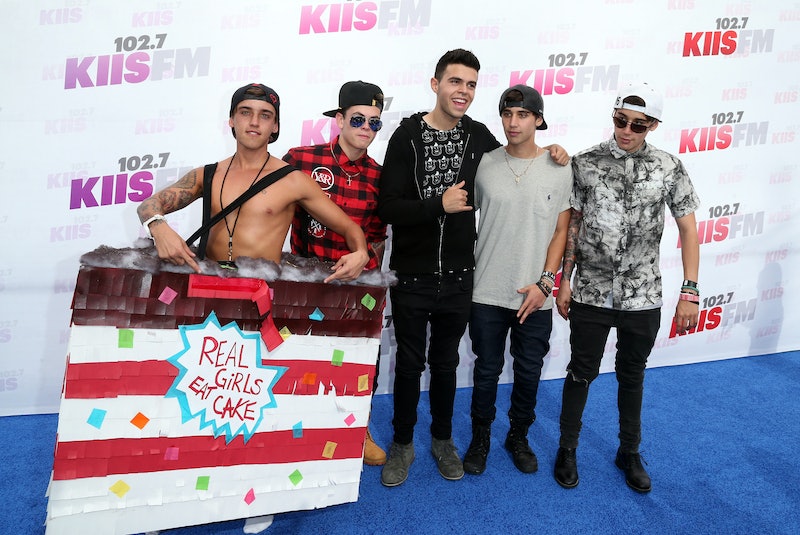 Ah, cripes. Here comes the, “UGH COME ON FEMINISTS JUST LAUGH AT YOURSELVES” argument. Australian musical comedy group The Janoskians have just released a music video for their latest song, “Real Girls Eat Cake,” and it will make as many bro-dudes LOL as it will make many women roll their eyes in annoyed agony. The song suggests in jest, “I don’t need a girl to worry about a thigh gap. I like the fact you don’t give a sh*t about that.” Which, in some ways, is a bit of an “Amen!” move... if the song didn't completely miss the mark.

As much as I’d love to write about the song using the phrase, “Feminist male comedians call out the insane standards set on women,” I unfortunately can’t say that about The Janoskians satirical take on women and their women-ness. Sure, the clip is supposed to be “funny,” but the problem is, the video still features a group of guys making fun of women. There are still racist, classist, ageist, anti-fat, anti-smart, anti-women sentiments here. Go ahead — watch it and see. If the group was calling out the action of men or the media, then maybe we’d be more likely to laugh with them. If you want to make smart comedy, you call out the action of the oppressor, not the oppressed... especially when you are the oppressor.

But hey, it’s comedy, right? It’s totally okay to make videos that are like, “LOL fat chicks,” because it’s being all meta and calling it out, right? RIGHT? Euuughhh. Again, it gets into messy territory when the people delivering the message are a group of good-looking white guys. And don't even get me started on the fact that we need to eradicate the whole "Real Girls..." and "Real Women..." phraseology from our collective cultural stratosphere because it's not doing anyone any favors.

Check out the video and its blinding male gaze below:

More like this
Daniel Radcliffe Is Shirtless In The New Trailer For His Weird Al Yankovic Biopic
By Jack Irvin
Spice Girls’ Net Worth: The Richest Member Is Wealthier Than The Rest Combined
By Hugh McIntyre
Selena Gomez’s ‘SNL’ Hosting Debut Had Twitter Gushing Over ‘Barney’ & Wigs
By Stephanie Topacio Long
Simon Bird’s New Show Is *Very* Different From 'The Inbetweeners'
By Nola Ojomu
Get Even More From Bustle — Sign Up For The Newsletter