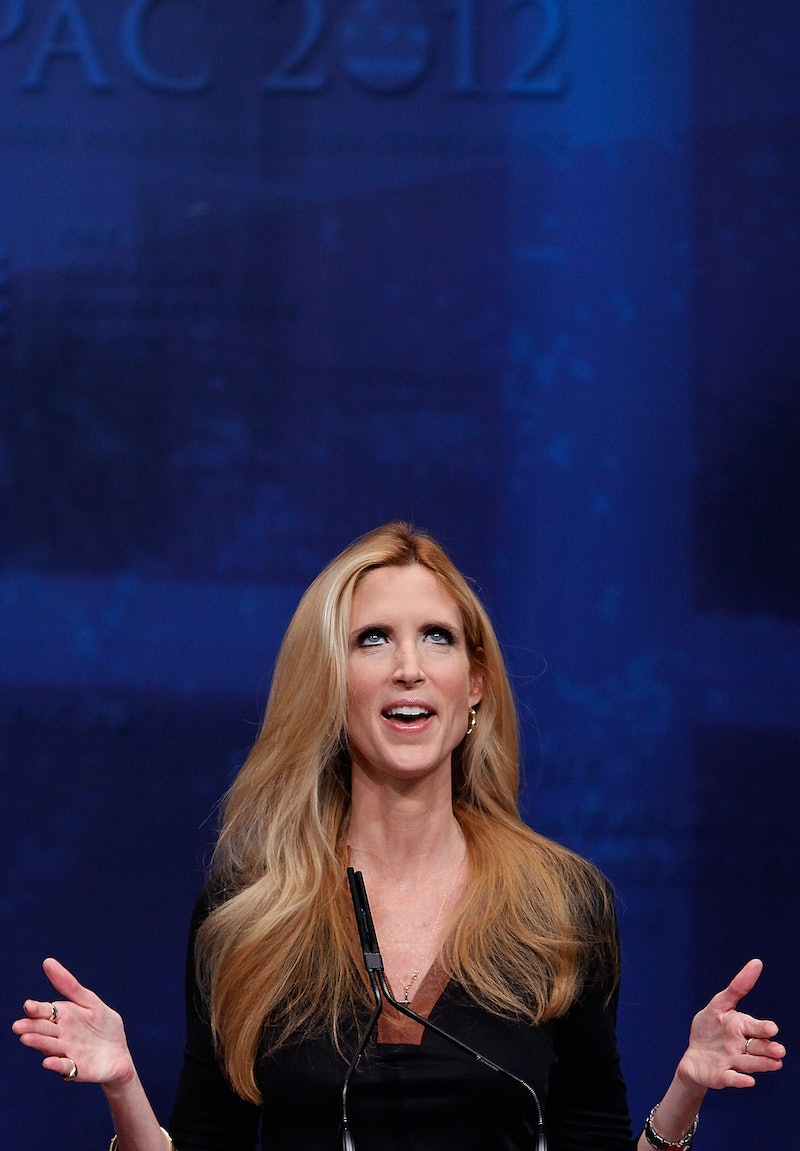 Ann Coulter, everyone's favorite flaxen-haired paragon of self-promotion, is at it again. The conservative pundit tried to make a statement on the #BringBackOurGirls hashtag by making Coulter's own version, "Bring Back Our Country," but it backfired on her in epic proportions. And just what was her message supposed to be in regards to nearly 300 Nigerian schoolgirls being kidnapped by a ruthless militant terrorist group? Essentially: stop with all your liberal compassion and awareness. She's shedding light on the real issue — something completely nonspecific about our country!Coulter is just one of several conservatives — who don't seem to have anything better to do — who have spoken out against the #BringBackOurGirls campaign. And it's clear that taking shots at First Lady Michelle Obama, who tweeted a picture of herself holding a sign with the hashtag, is their real motive. The campaign could probably be about anything.

Conservative columnist George Will scoffed at the hashtag and the FLOTUS' use of social media activism, saying on Fox News Sunday, "Are these barbarians in the wilds of Nigeria supposed to check their Twitter accounts and say, 'Oh, Michelle Obama's very cross with us, we better change our behavior?'" He added, "Power is the ability to achieve intended effects. This is not intended to have any effect on the real world."

Oh yeah? Then how do you explain more than a million people tweeting #BringBackOurGirls, world leaders publicly joining the campaign, and the U.S.'s decision to send in a team to help find the abducted girls? And what exactly have you done, George? Are you going to sit down with Boko Haram and really give them a piece of your mind?

Rush Limbaugh has also lambasted the hashtag and campaign, calling it "pathetic" on his conservative radio show. Jon Stewart did not take kindly to this. He showed a picture of Malala Yousafzai holding a #BringBackOurGirls sign and told viewers, "So that's our choice: Malala or Rush — the quivering rage heap who is apparently desperately trying to extinguish any remaining molecule of humanity that might still reside in the Chernobyl-esque superfund cleanup site that was his soul.... Who should we choose? Well I don't know, why don't we tweet our votes to hashtag #F*@KYOURUSH." Not surprisingly, a torrent of tweets showed up on Twitter with that hashtag.

But that's nothing compared to how Coulter's antics blew up in her face. Thinking she had cleverly trolled Michelle Obama and all the supporters of the hashtag, she was clearly out of her depth. Here's a glorious roundup of the best tweets parodying her parody...

At the end of the day, Coulter and her fellow conservatives are still merely criticizing without offering solutions of their own. And we have a special name for those people: Debbie Downers.