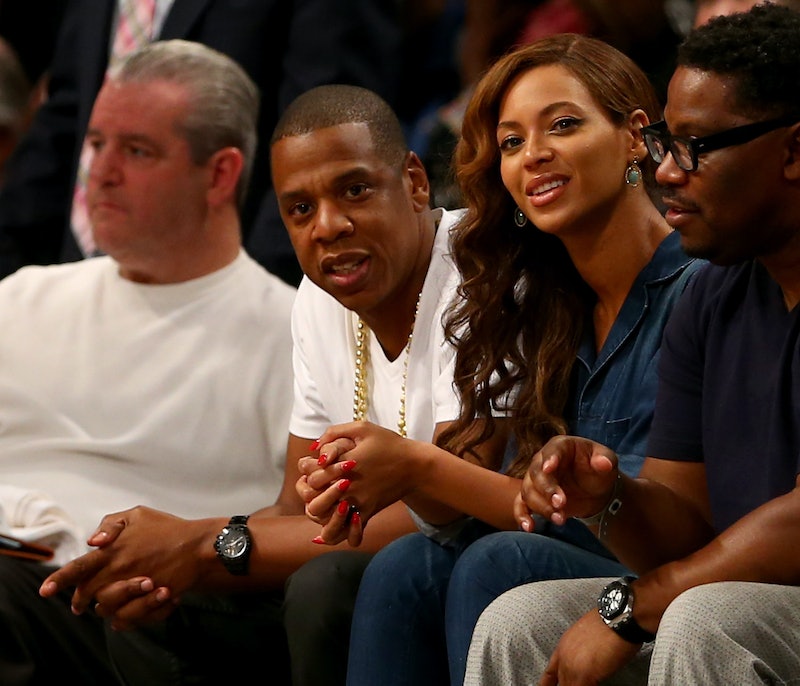 If you did any basketball watching Monday night or any Internet browsing Tuesday morning, you may have heard that Beyoncé and Jay Z attended the Brooklyn Nets game only hours after news of Solange's elevator attack on Jay Z was released. The fight occurred a week ago on May 5, so it's no surprise that Beyoncé and Jay Z have gotten back to their normal lives, but what may be surprising to some is that they would attend such a high profile event so soon after the video footage came out. Shouldn't they be in hiding following such a shocking incident? Shouldn't they be scrambling to figure out the appropriate plan with their team? No. No, they shouldn't. This is Beyoncé and Jay Z we're talking about, two of the biggest celebrities in the world who are dealing with what was obviously a private, family issue. To not go on with business as usual would only draw more unnecessary attention.

Not only did Beyoncé and Jay Z keep things normal by attending the game, they haven't released statements on the matter and neither has Solange. While Solange hasn't been seen out and about like her sister and brother-in-law, she was active on Twitter Monday, thanking Delta for a friendly pilot and flight attendants on her flight to New Orleans and interacting with a fan who asked if they gave her extra cookies.

Not talking about the fight publicly is the appropriate course of action for these three. There isn't anything they can say that will make it seem any less strange or make people stop talking about it any sooner. An explanation would just reignite the issue all over again. The best way to go about things is let people speculate what they want and wait for it to pass. Actions speak louder than words here. If Solange, Beyoncé, and Jay Z are seen getting along (even if it's a couple months from now) that will say that they figured this out on their own, as they were meant to, and that if they moved on, so should everyone else. Or if they don't end up getting along, that works too. If they continue with their lives as if the video hadn't been released, eventually everyone will have moved on to the next thing.

That said, just because Solange, Bey, and Jay are coming off nonchalant in public, doesn't mean they, along with the Standard Hotel where the incident occurred, aren't scrambling to figure out how the video got out in the first place. Problems can arise between family members, but someone leaked that tape and I'm sure they all agree that issue isn't best solved with ignorance.