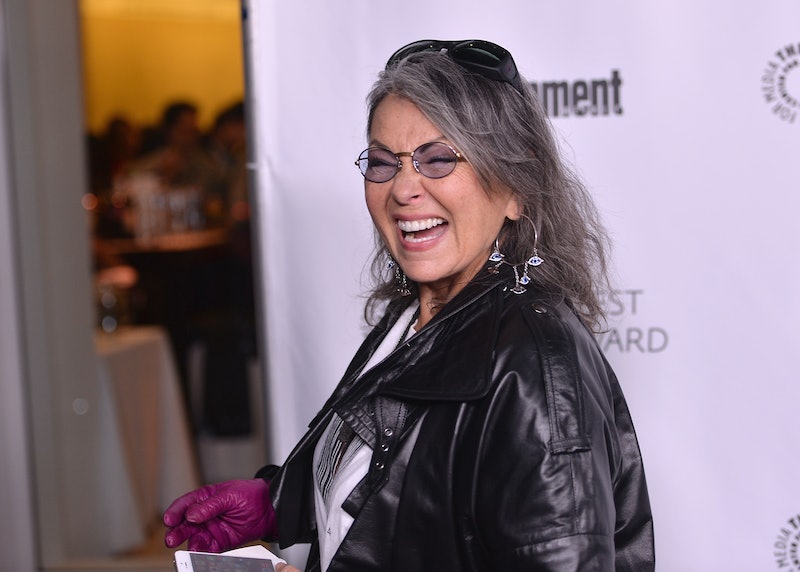 Norm McDonald and Roseanne Barr are sick of the words "crazy" and "difficult," because they're largely fucking bullshit. In an industry divided squarely — creative-types on one side, and the business types that employ them on the other — it is very easy to sling the words "crazy" and "difficult" around to explain away and hush up those things and people you don't understand. And according to McDonald, it's used far too often to silence people that aren't in power, which is insecurity-riddled garbage. So when the longtime comedian and writer came to the defense of one of his mentors, the oft-maligned Roseanne Barr, it was refreshing to see — and Roseanne's expansion on his ideas got us thinking.

Speaking in a series of tweets (edited below and in-full by Ross Luippold for clarity purposes), McDonald lamented the idea of the "crazy" comedian too difficult to work with and how that limits the scope and the voice of comedy.

It is sad to me that so many great comics are not working because they are dismissed as being ‘difficult’ or ‘crazy.’ I worked with 2 of them.

The first I worked for was Roseanne Barr and she taught me how to write stuff that was real and fine and true. And I remember in the writer’s room, the boys from Harvard would write a script and send it over to Roseanne. And an hour would pass and the script would come back from Rosie and she would always have the same note: too many jokes. Too many fucking jokes. The Harvard boys thought Roseanne was crazy, but they deferred because they had to, and took out the jokes they loved so much. And the episode would be great.

And the next week, don’t you know, the Harvard boys would write a script and Roseanne would have the same note: too many jokes. So the Harvard boys had to kill their babies and denude the script. And that week the episode would kill. And so it went, week after week after week. The Harvard boys saw the show killing but boy, it would kill a lot harder if those jokes were in. It became clear to me early that Roseanne was onto something, that she wasn’t interested in a standard sitcom. Roseanne was more interested in the sit than the com. She knew the situation should create the comedy. Fuck the jokes. But the Harvard boys never quite got it. Just thought Roseanne was lucky, that the casting was responsible. They never saw that Roseanne was creating something never seen on TV before. Something ultra-real, sad, rough, funny as hell. What Roseanne was creating, with the help of the typists from Harvard, was a beautiful, tragic, funny show. Like life. A lot like life. And the show resonated in this nation. And there was never a more lovable, effective feminist than Roseanne.

When the show ended, the Harvard boys went to other shows and were paid millions. After all, they had written Roseanne. Sort of. And Roseanne went away. She may have wanted to. I don’t know. But I do know what she was called. ‘Difficult.’ ‘Crazy’ even. These are words that are dismissive and can torpedo careers. Orson Welles was difficult when he tried to make a canned pea ad literate. And he was mocked for that. And so, the genius who made the best movie ever made couldn’t work. He’s crazy, you know, very difficult. Code words, these. Meant the guy or gal in creative has some ideas, maybe ideas much better than yours. That can be very difficult indeed.

Once I had a sitcom and I wanted to cast a legendary actor. ‘No,’ said the director. ‘You don’t want him, he’s crazy.’ ‘I don’t want you,’ I said. I was looking for a writer once for Weekend Update and they said, I hear he’s crazy, and I read his jokes and they were great and he was hired. I’m sure people have said I’m crazy because when I’m on a show, I stay late into the night writing and people want to go home. I’m crazy. I know Roseanne has tried a couple of times to do something and I know for fact she could create another masterpiece. I know for a fact that Roseanne is a true feminist in a world of false ones, and I know she has greatness in her. And I know Roseanne is a genius who is being wasted. If only she was less crazy, less difficult. If only she were an easygoing dolt. Tomorrow I’ll tell you about the other comic that’s too ‘crazy’ to work.

Now, before we give him a standing ovation, let it be known that we are huge fans of Roseanne Barr. The intrepid comedian and pioneer for so many women — heck, for anybody who's ever even been a part of the working class in America — has remained staunch in her position to be unforgiving in her way of doing things, making comedy, lambasting the ill-informed. and beyond. And it says something that we feel ALL of the feelings when it comes to finally seeing someone (especially a man) stand up for her and laud her for her feminist principles and laser-like focus on her voice and what it brings to the conversation.

Just because it's quick and easy doesn't meant it's right or even fair. , oh well so-and-so is crazy so despite all their talent just ignore them because c-r-a-z-y! Especially when that so-and-so is a woman because don't you know how ca-razay those ladies be with all their estrogen and unhinged emotional states and their PERIODS that make them extra-crazy like a horror movie monster? Never trust something that bleeds for five days and doesn't die — knowwhatimeant?!

Norm, I'm so very touched by your words. I was a working class woman comic in the classist racist sexist lions' den of imbeciles. It was the level of jokes that I hated — mostly stolen from comics or seen on other TV shows for ages — no creativity no thought. That was the worst blow of all the sexist blows I took — they had to denigrate me as they took my money — because pimp mentality. Pimpin' ain't easy, I guess. Hard to freshen rehashed stereotypes for viewers they "flew over" and despised like they despised me. Their jokes were not funny. They were cheap, rehashed classist and sexist and RACIST bullshit. I pushed for black characters and the writing would come down to characters named "Juanita Goldberg" so the jokes could be anti-Hispanic mixed with "coon jokes" from 1922. I came back, but the network people had changed — they were all female (because of me) and all of them hated feminism. It was amazing to see.

The most amazing part is that they continue to erase my work and accomplishments, yet call themselves "feminists." It's hilarious! They hate me because I have ideas. They still help themselves to them freely, too. They have turned down 10 pitches from me — then after turning down ALL pitches from me, two years later, my rejected ideas show up on new shows. I won't pitch anymore.

Norm, I'll come back when/if I get my own network, or something I wrote gets looked at — if I wrote it — NO NETWORK will read it. There's so much dirt, lies, blacklisting, and filth that I was lucky to live. People I mentored denigrate me daily from their mansions. The people that were able to take advantage of the social doors I personally kicked down have shown themselves to be vacuous misogynists. For a while, I wanted revenge/acknowledgement, but now, I'm happy to be free of the mental abuse that women creators still face. "Hollywood can kiss my happy rich black ass." – Richard Pryor.

Roseanne has always refused to appeal to the lowest common denominator or the widest swath of people. She's always remained steadfast in her mission to remain true above all else. No matter how hard it is, regardless of the complications, in spite of the challenges of portraying a nuanced understanding of a tricky, unappetizing, or shocking subject. So often the push for comedy to go further — in the "let's get beyond the face-level haha shit and move to a place that make us think about why we're laughing" — is deigned as over-thinking humor, when in fact it's about the opposite.

For people like Roseanne and others, it's often about respecting it. About giving the subject the full, unfiltered look — regardless of what it might say about the viewer, the character, or the state of humanity at large. Laughter is medicine for most, to be sure, but that laughter can also be more than that. Comedy and laughter can give rise to deeper conversations, lend a critical eye to the why behind a subject's humor. Have people ever stopped to think that maybe that person is "difficult" because they respect too much the power that comes with making people laugh and ability it has to make people think. Louis C.K. wasn't the first person to do this, it's just that the people in control of saying whose voices get to be heard are often part of the bigger problem.

Thankfully, Roseanne (and hopefully those like her) will never stop talking or making her point. People just need to shut the fuck up and listen already. And I mean really, really listen — not with the caveats of "crazy" or "difficult" attached to them. The most controversial laughs start the worthiest discussions.

More like this
'Gentleman Jack’s Cast & Crew Are Keen On Season 3, Too
By Frances Stewart
'Heartstopper’s Joe Locke Has A Sweet Message For Queer Fans
By Sam Ramsden
'Derry Girls’ Dylan Llewellyn Will Star In C4’s New Queer Comedy
By Rachel Mantock
Jake Daniels Just Became The UK’s First Active Football Player To Come Out As Gay Since 1990
By Sam Ramsden
Get Even More From Bustle — Sign Up For The Newsletter