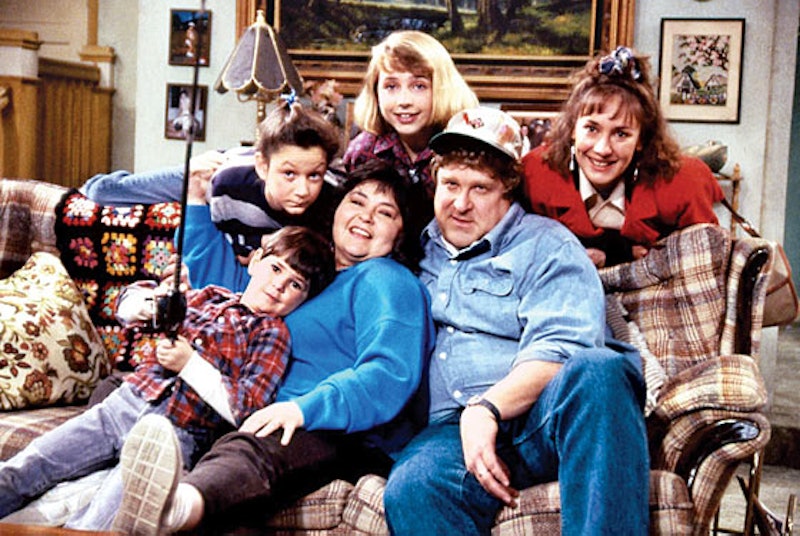 On Oct. 18, 1988, Roseanne Barr brought her very particular, very gruff, and very groundbreaking brand of feminism to television with her eponymous comedy series Roseanne. That's 25 years ago (tomorrow)! And even after all these years, the strides she made back then still reverberate today as some of the most important work for female characters on screens big or small.

You see, there's still — even all these years later — a fairly narrow understanding of what it "means" to be a feminist in popular culture. Films and series have a really hard time handling women who have a certain level of self-respect and autonomy. Typically, these women are dealt a curious glance, or reduced to a clueless trope, making it difficult for anyone tuning into media to understand how to approach the whole "ladies be equal people, too" idea.

For Barr, the series was about more than just entertainment. Her hope was that by spooking the "passive voice of male supremacist ideology" that so frequently proliferates itself on screens of all kinds, that we "would be forever altered with just a relatively few excellent jokes, guffaws, kicks, knives to the heart, and sledgehammers to the heads of Madison Avenue's Persuasive Piggery."

Feminism on television and in movies often plays out in two female archetypes: the philosophical artist (who also just happens to be some sort of sexual goddess), or a radical feminazi (who just needs to learn how to "accept love" from a man in order to be fulfilled). It's all tied-bows or bound tradition — and none of it really spoke to the regular, run-of-the-mill brand of feminism that was smart, self-assured, and undeniably average in its everyday machinations. On the surface it's easy to say, well, not much has changed. (Just see Two and a Half Men, How I Met Your Mother's recent Robin problem, or, heck, even the first season iteration of Leslie Knope on Parks and Rec.) But Roseanne actually created a third type of woman: the regular, everyday woman. One with flaws, opinions, a past. Sound familiar? Gasp! That's because this third type is now desired and applauded, as evidenced by the acclaim for some of the best new series out there, like Orange is the New Black or Masters of Sex.

Too bad it took us 25 years to catch up to Barr. The transmogrification of female identity on television is hard, y'all.

Writing about her experience with the series, Barr explains that she "knew that everything on television was bullshit — the forcing of Gender-ism and consumerist fundamentalism down the gullets of the viewers, especially the female ones." And so she vowed to fight it through witty comedic jabs on screen week in and week out, hoping to make a difference. To change the conversation's tone rather than simply change for change's sake.

Which is why the mere presence of a show like Roseanne was such a coup for women and working class families across the country. Here was a woman who took no shit, gave none of the fucks, but loved her family and knew all-too-well the ramifications of everything from the patriarchy to Reagan-era, trickle-down economics. And she changed the game simply by being so unabashedly assured in her vision, and reminding the viewers at home that hers was just as valid in its perceived-but-not-really otherness.

"To speak directly to working class viewers in an active feminist voice over the people's airwaves about the true nature of Reaganomics on their lives seems to have led to a fracturing of the advertising medium itself ... commercials switched from using the passive patriarchal voice to an active feminist voice." Roseanne's affects reverberated beyond just the voice of the women on screen, but the voices talking TO or AT the women on screen.

But it was easy for many to poo-poo such a (yes, really) nuanced look at the world of the late '80s and early '90s when you consider that Barr's packaging was far from the norm on television. Roseanne Conner was a far-from-svelte figure, all brash vocalizations and a wildly explosive, attention-demanding presence. Barr was not a woman most typically propped up on screen, but she represented an important shift in the paradigm. As her show climbed to the top of the ratings heap, Barr brought with her a fully realized yet far-from-perfect, practical approach to feminism.

And resonate it did: Episodes regularly averaged over 12 million viewers per week (a number that's super-impressive even by today's standards), and several episodes reached far beyond that. An Oct. 3, 1989 episode netted 43.5 million viewers. Totally insane, and totally amazing.

Roseanne wasn't just brilliant as a stand-alone, though: It brought into the world other writers who value feminism and fully-realized, complex female characters, like Joss Whedon. And while some 'round here may not agree, others believe (like I do) that Whedon's brand of feminism is pretty darn good, all things considered.

In the end, it is just that sort of go-big-picture thinking that ultimately causes change and brings about equality on screen, which leads to a greater understanding off-screen. (You know, in the real world?) "I wanted to shoot not the messenger, but the message itself," Barr wrote. And to that we cannot be more thankful. So here's to another 25 years of icon status, Roseanne — you've more than earned it.

For those of you hoping to get a bit more context so to just how wonderfully subversive, topical, and boundary-pushing Roseanne's brand of humor really was (we understand: you wee ones might not have even been born in the '80s, and we're totally not bugging out at the mere thought of that), take a glimpse at Barr's most favorite episode of the series: "The Fifties Show," below.

Sometimes it's not about the so-fucking-stupid-it-hurts ideal of "having it all." Sometimes you just want to have enough. And as a woman, a mother, and a byproduct of the times, Roseanne was all about living in her reality, rather than an aspirational ideal thought up by a bunch of suits on Madison Avenue to sell lipstick.