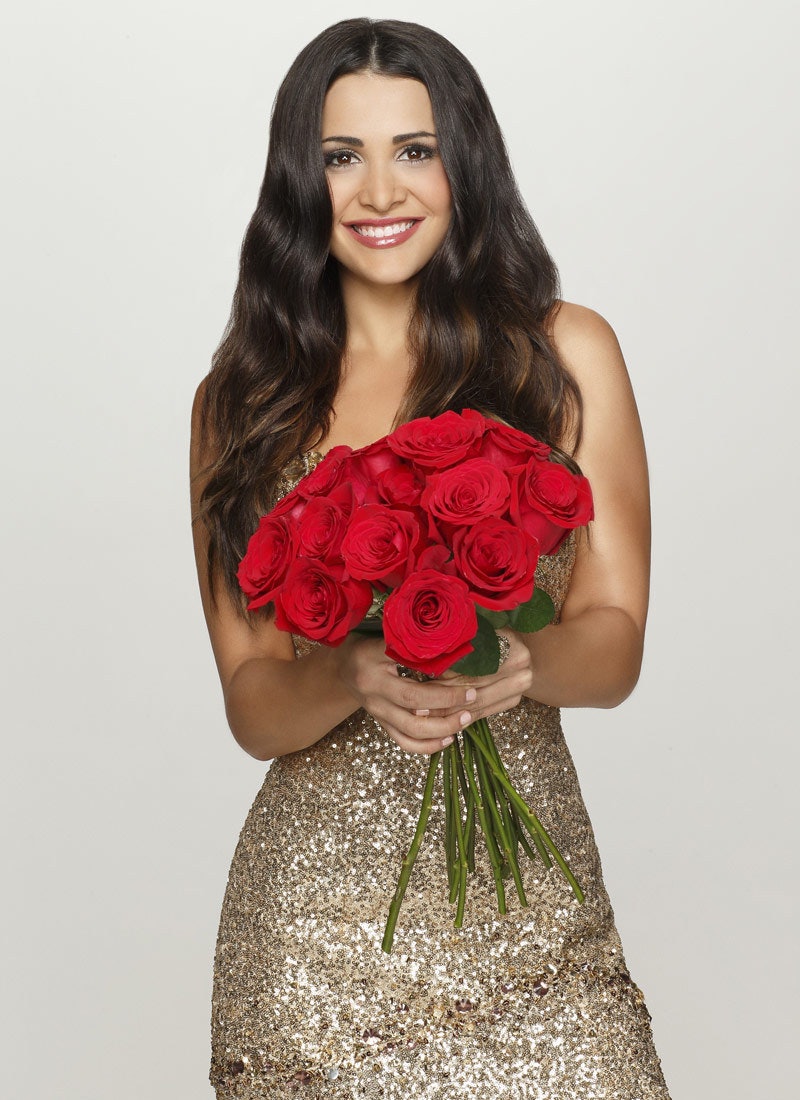 The day we've all been waiting for is here: The Bachelorette's Andi Dorfman's suitors have officially been announced. A few weeks ago, Chris Harrison revealed that Andi being the Bachelorette was a big draw for the show and a ton of accomplished men signed on. "The guys that we found and who approached us are of a much higher level," he said. As a result, there are probably some really good guys in this group. But this is also a reality show, so there has to be some crazy guys in there too or it wouldn't be good television. We've already pegged a few as potentially worse than Juan Pablo (if that's even possible).

ABC has given us a little extra insight into these men by asking them some personality questions. Last I checked, knowing a guy's shoe size meant basically nothing, but ABC seems to think that is burningly important for us to learn this information. I guess now I can send them shoes? Or maybe ABC is trying to have us make a shoe size/you-know-what size comparison (wink wink). In addition to their names, ages, cities, and shoe size, we also get to see a variety of the guys' answers to personality questions which le's us learn a little more about them. (Like their favorite holiday or breakfast food!) So what can we glean from this information? That some of the guys are let's say... interesting. See the complete list of all 25 men below:

Nothing crazy about him. In fact he was so boring that the best answers ABC had to work with from his survey were about the food he likes and the fact that he has zero tattoos. Snooze fest. Plus he also says he likes being "mysterious" and any guy who admits that is probably not mysterious at all.

Bradley probably signed up hoping he was going to get to meet fellow opera singer Sharleen. He'll probably exit Andi's season early on because he's just not feeling it.

Jury's out on Brett. He'll either win it all or be the house drama creator. His smile says "friendly" but his hair says "bro" and that could spell disaster.

The Notebook is one of his favorite films which means he'll be ALL about the romance on this show. Will he be right for Andi? Who knows, but something tells me he'll do well on the season if only for his romantic tendencies.

He's a firefighter which is pretty cool. He might be able to go the distance. Plus he has several tattoos. Obvi tattoos = personality. (I don't know, I have zero tattoos.)

Chris is a farmer who told Us Weekly that his ideal mate is "slender, athletic, beautiful" all of which Andi is, so if she can put up with the fact that he's actually one of those guys who reads farming magazines and describes his ideal mate as "slender" then they should be good to go! (Can you detect my sarcasm?)

Or as I like to call him, Sean Lowe 2.0 because he looks just like the former Bachelor. Cody is a personal trainer which I know can spell t.r.o.u.b.l.e on the show (remember Ryan on Emily's season?) Plus he seems way too into himself. The reason he doesn't have any tattoos? According to him, "You don't put bumper stickers on a Mercedes." Gross.

Craig's fun fact is that he once puked on a girl during a date. This just shows that Craig is in the same boat with E! in not knowing what "fun fact" actually means.

Despite the fact that Dylan has the taste of a child (apple juice as his favorite drink and connect four as his favorite board game? Okay...) Dylan seems nice enough. I'll reserve further judgement for the first night.

Emil's favorite dance is twerking. I'll just let you sit with that.

By now we know that Eric is the contestant that passed away after an accident last month. The Bachelorette Facebook page seemingly ignored this when posting these portraits as they sandwiched him in and made no mention of the fact that he's no longer with us. Eric's story is pretty sad because he seemed like he was a really good, passionate guy. Even if he was still in the running, I'd have nothing bad to say about him his profile makes him seem both fun and humble. I'm not at all surprised that he made it pretty far in the competition.

Jason is a doctor which is good because it shows he knows what a demanding career is like. Andi is also invested in her job, and needs someone who understands that.

JJ is adding the Bachelor's list of most ridiculous contestant jobs by being a pantsapreneur. Whatever that means. I hope he brings Andi pants on the first night. Or makes a pants pun like "I've been dy-jean to see you" or "I careduroy about you."

Josh looks to be pretty sweet and normal (!) We'll put him in the "could win it" category. But if Andi doesn't pick him, he'll probably take it well since he's a telemarketer and has practice being rejected/hung up on.

Josh #2 is a total softie and said his biggest dating fear is "she won't like me as much as I like her." He has real propose-at-the-finale potential which ABC will love.

Marcus was a pro soccer player which could hurt him after Andi's experience with Juan Pablo. Other than that red flag, he seems to pretty cool.

Marquel looks suave as hell (and that rhymes). Look at that spiffy suit. Plus his Saturday night "consists of Netflix, cookies, and a glass of wine." Can we cancel the show so I can start dating him instead?

Asked what his most embarrassing moment was, he admitted "It could be this." Mike is getting meta on us! Is he our new Sharleen? I'd welcome that.

Nick S. is a pro golfer which, by the way, is Josh B.'s dream profession so expect some jealousy on his part.

Nick V. says his favorite flower is "a rose...duh" and I kind of want to punch him.

Patrick seems totally normal, but also like he has some personality. (His favorite holiday is Halloween unlike all the other guys here who picked Christmas.) He could go far in this season.

He says the most romantic thing he's ever been given was a card. Why? Because "people's words are pretty powerful when they write them down." I agree (I'm a writer, after all) but I just hope he won't be this season's cheesy poet like Chris was on Desiree's season. Although she was into that because he won!

Rudie is an attorney which will either help him or hurt him. He and Andi can bond over common interests, but she may not want to marry someone who is so much like her.

Steven listed his greatest achievement as not something he did (like earning an M.D. or creating a business) but as helping little kids at a snowboarding camp. He's totally aww-some.

As a wedding event coordinator Tasos takes love seriously. He is in it to win it.

Stay tuned to see how Andi reacts to her suitors on May 18th!