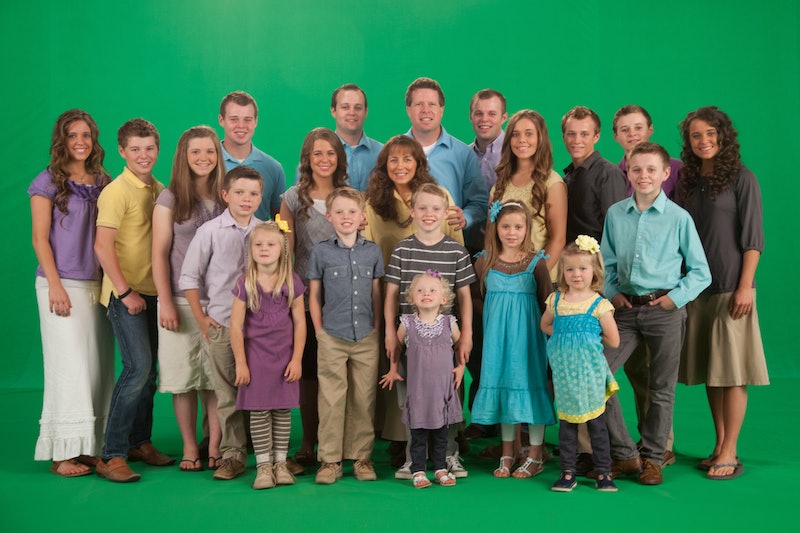 Laundry is the bane of my existence, so the mere thought of the Duggar family having to do laundry for 21 people makes me want to fall to the floor and cry uncontrollably. Dramatic? Not at all. That's a crap load of laundry to do.

When it comes to the Duggars, clothing is seriously a big issue. It might not be as big of a talking point as their grocery bill or their courtship rules, but it's still a big deal. Because how much laundry do they actually have to do? And who does it all? (Michelle can't be the only person that washes and dries the clothing of her 19 children.) How many washers and dryers do they actually have? How often do they have to do laundry? How much money do they spend on detergent? Who folds all of the clothing? How much clothing do they even need? Is it all hand-me downs? How many hangers do they own? How many lonely socks have been lost? Obviously, I have a lot of important questions that I want answered.

Well, here's what I've been able to find out about their clothing needs and their laundry habits:

1. They definitely have a lot of washers and dryers.

The Duggar family has four washers and four dryers. Wow.

That's it — I'm officially curled up in a ball on the floor. I can't handle that number. That means that they do approximately 2,080 loads a year, compared to the average family that does an average of 300 loads per year. Nope. No thank you.

3. They make their own laundry soap.

Instead of spending an insane amount of money on detergent, the Duggars make their own soap. According to Michelle, her recipe only costs $2 and makes 10 gallons of soap. That's a freakin' lot of soap. In a top-load machine, the recipe yields approximately 180 loads, and a front-load machine yields 640 loads. Is this completely boggling anyone else's mind right now? (Kudos to Michelle.)

4. They have one giant closet.

The Duggars have a family clothes closet where they keep majority of the clothing. According to Michelle, when someone needs something to wear they go down and pick something out from the closet. Does that mean it's a free for all?

5. Grandma hangs their clothes on racks.

What a grandma. Seriously, she deserves a best grandma of the year award.

6. They begin packing clothes for a trip weeks in advance.

"Packing begins quite a bit earlier for us so that we can get all of the details down," says Michelle. "We start weeks in advance. Usually, we try to make sure that we've got enough socks and underclothes for everybody for seven days. It doesn't sound like a big deal, but when you have to have seven pairs of socks for everyone, you multiply that." That definitely means that they have to pack almost 150 pairs of socks for one trip.

More like this
Your Home Could Seem So Much More Expensive If You Tried Any Of These Cheap Tricks
By Dena Ogden and Sara Brown-Rigoli
Danny Dyer & Ellie Taylor’s New Netflix Game Show Is All About Cheating
By Rachel Mantock
What Is Barack Obama’s Net Worth? He Makes *Way* More Now As An Ex-President
By Hugh McIntyre
The Richest 'Bling Empire' Cast Member Is...
By Hugh McIntyre
Get Even More From Bustle — Sign Up For The Newsletter