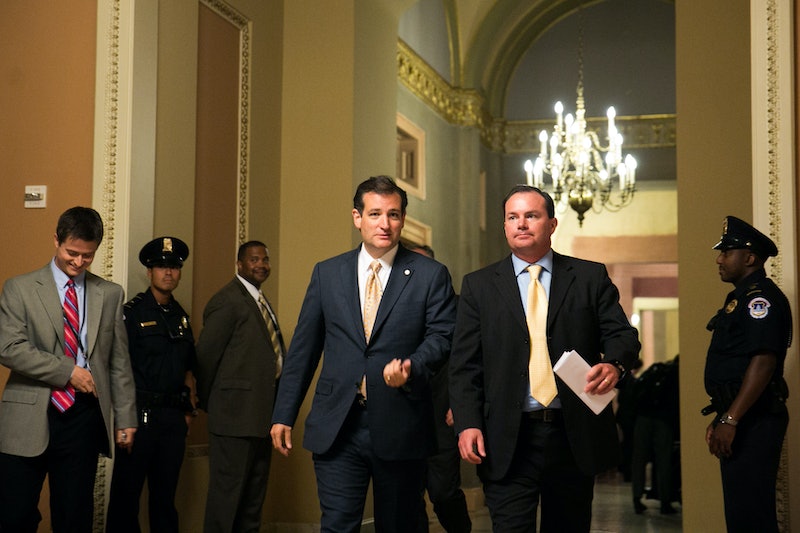 On Tuesday, the Tea Party-endorsed Ben Sasse won the Republican senate primary in Nebraska, handing the group a much-needed victory. According to an Associated Press vote tally, Sasse pulled in roughly half of the vote, while his opponents, Omaha banker Sid Dinsdale and former state treasurer Shane Osborn, won just 22 percent and 21 percent respectively. Unless something goes drastically awry, Sasse will step into the shoes of retiring Republican Sen. Mike Johanns following the election in November. It was a victory the Tea Party worked hard for.

Power trio Sen. Ted Cruz (R-Tex.), Sen. Mike Lee (R-Utah) and former Alaska governor Sarah Palin all campaigned on Sasse's behalf. Outside groups, including the Club for Growth, the Senate Conservatives Fund, the Tea Party Patriots Citizens Fund and FreedomWorks all threw money behind him. (Sneakily, FreedomWorks was actually originally supporting Osborn, but switched allegiance in March when Sasse started to surge in the polls.)

But any Tea Party supporters harboring beliefs that Sasse will become a strong voice in the anti-establishment ranks when he gets to Washington are likely to be sorely disappointed. Because Sasse is not actually really a Tea Party guy. Not really.

Sasse is actually pretty firmly established within the establishment. He held several role within President George Bush's administration, and spent six months back in 2005 as chief of staff for Rep. Jeff Fortenberry (R-Neb.). He's eye-poppingly clever — he did his bachelor's at Harvard, before going on to earn a Master’s from St. John’s College in Annapolis, Md., and two Master’s degrees from Yale. Then he went and got a Ph.D. from Yale too, just for good measure.

Back in September, Sasse picked a fight with senate minority leader Mitch McConnell (R-Ken.), telling him in a video that he needed to start showing some leadership. This was exactly the kind of statement that got the Tea Party interested, and some were hoping that if Sasse got elected then he would continue to push back against McConnell and other conservatives of his ilk, whom the Tea Party thinks are not taking a strong enough stand in Washington.

But just before the polls closed on Tuesday, Sasse told MSNBC that he is a "team player" and that he's "absolutely" comfortable with backing McConnell in next week's primary in Kentucky.

But this could well be the best "win" for the Tea Party in this round of elections. Despite some scare-mongering, McConnell is the front-runner in next week's Kentucky primary, with Tea Party-backed Matt Bevin trailing behind. David Perdue and Jack Kingston are ahead in the Georgia Republican primary, with Tea Party-supported Reps. Paul Broun and Phil Gingrey languishing in fourth and fifth place.