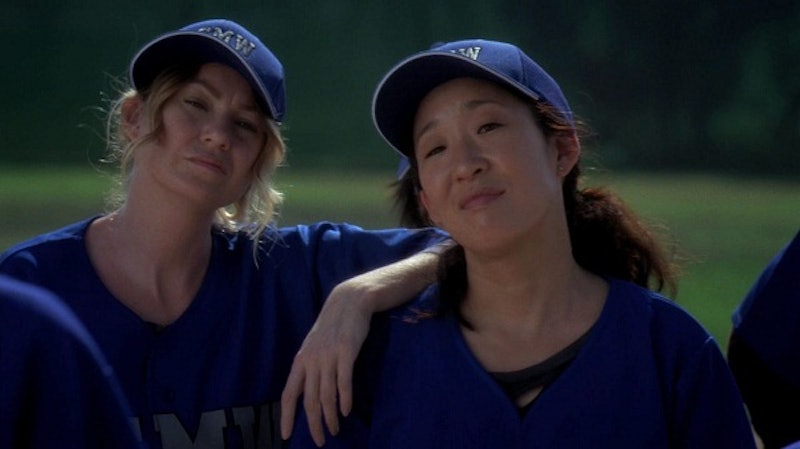 For ten years, Meredith Grey and Cristina Yang have been best friends, work rivals, and each other's "person." We've gotten the privilege of watching their relationship mature over the course of the decade that Grey's Anatomy has been on the air and it's all coming to an end tonight. In the Season 10 finale, which Grey's Anatomy is billing as the "Farewell to Cristina," actress Sandra Oh will depart the medical soap for good.

We've already spent time running down Dr. Yang's most memorable moments on the show, and while she's definitely awesome all by herself, there's no denying that Cristina's at her best when interacting with her "person," Meredith. So in order to emotionally prepare you for the Farewell, we've compiled a list of the 10 biggest moments in the Meredith & Cristina relationship, from Seasons 1 through 10.

The pair has definitely had their ups and downs. They've been tested by all kinds of external forces: work drama, marriages and pregnancies, natural disasters, and plane crashes. But through all of that, they've remained steadfastly at each other's side. That doesn't mean there haven't been fights — but something keeps drawing these two strong women back together. It's the kind of obstacle-defying friendship most of us can only dream of having. And Grey's will never be the same without it.

After Meredith kind of sort of unintentionally stole an important surgery from Cristina in the very first episode, it didn't seem like these two competing interns could ever be friends. But Cristina proved us wrong by rising above the occasion.

Cristina: You Should get some sleep. You look like crap.

Meredith: I look better than you.

This was the first glimmer of the deep-set understanding that would go on to form the basis of the Meredith & Cristina relationship.

The word that would go on to define their relationship was first uttered in the Season 2 premiere. When Cristina accidentally got pregnant, she decided she couldn't raise a baby and be a successful surgeon at the same time. So she scheduled an abortion and put down Meredith as her "emergency contact person." Touched by this gesture, Meredith put her arms around her friend. "You realize this constitutes hugging," Cristina protested. Meredith responded, "Shut up. I'm your person."

3. Season 2's "Sleeping with our bosses was a great idea."

When Meredith finally came back from the brink of death thanks to her hypothermic dip in the chilly Seattle waters, Cristina was there by her side. "Ouch," was Meredith's first word. With tears streaming down her face, Cristina blurted out the news of her recent engagement to Burke. "You were the one person I wanted to tell," she admitted.

What with getting married to Derek while Izzie succumbed to cancer and a John Doe (who turned out to be George) was dying after getting hit by a bus, Meredith decided it was important to let the people you love know it before it's too late. Her surprising declaration of love to a delighted Cristina elicited an even more surprising response: Cristina initiated a hug, a heretofore unheard of expression of affection in their twisted relationship.

Just before a madman started shooting up their hospital, Meredith revealed to her bestie that she was pregnant. Cristina wisely waited to gauge Meredith's emotions before reacting, but then she was nothing but ecstatic. "This is very adult," she said approvingly. Just to illustrate how close they were, Meredith actually told Cristina about the baby before the father even knew.

This nifty little scene featured them spilling their guts from either side of a closed door. Meredith had the stomach flu, and Cristina didn't want to catch it on the eve of her oral examinations. But not even a wall can keep these friends apart. Cristina confessed that Owen had cheated on her and told Meredith she was thinking about taking a job offer at another hospital in order to leave him. Meredith was clearly devastated. "You'd be leaving me, too," she pointed out. But because she knows Cristina so well, she knew it wasn't the time or place to belabor that point, and chose to simply hold Cristina's hand under the door for comfort instead of begging her friend to stay.

One episode earlier, Cristina broke Meredith's and all of our hearts by telling her that in order for her to recommit to Owen and their marriage, he needed to be her "person." So when the two ladies found themselves stranded in the middle of the woods after a horrific plane crash in which Lexie died and Derek went missing, Meredith couldn't help but sob to her increasingly distant friend, "You're still my person. Even if I'm not yours." Heartbreaking.

Though Meredith and Cristina made up post-crash in Season 9, with Cristina admitting that Meredith was still her person ("You will always be my person"), Season 10 found them growing apart once again. Cristina was frustrated because Meredith was losing focus due to her children, and Meredith was resentful because laser-focused Cristina was becoming the killer surgeon they both always wanted to be. It was a very authentic way for two stalwart friends to start drifting apart, which only made it all the more difficult to watch. Fortunately, they managed to stop feuding and reach a detente in time for April's wedding. Things may never be the same between them again, but that's because they're not the same people they were ten years ago.

Despite claiming that she'd be fine at the Harper Avery ceremony on her own, Cristina freaked out as soon as she arrived in Boston. She called Meredith in a panic and admitted that she was mistaken: she needs Meredith with her. She needn't have worried. Cristina walked into the banquet hall to see Meredith and Owen waving her over to their table. Meredith knows her person so well by now that she can anticipate her needs before Cristina even knows them herself.

It's hard to imagine what Grey's will look like with Meredith's person gone. They completed each other — with Cristina gone, it will be as though the show is missing half of it's main character. Thankfully, Shonda Rhimes has ensured us that she won't be killing Cristina, so the character should be free to return whenever Sandra Oh is willing and available. Because you know that between now and when the Grey Sloan Memorial Hospital closes its doors, there will come a time when Meredith will need her person. And hopefully Cristina will be right there for her, anticipating her need, just like Meredith once did for her.

And whenever you find yourself missing Cristina Yang, just follow her advice and dance it out.