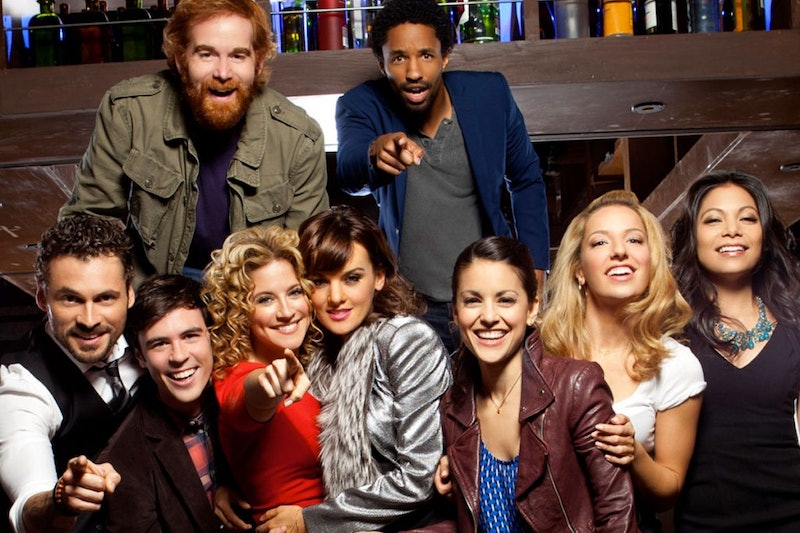 When it comes to freshman comedy Mixology, ABC is closing out its tab. According to reports, ABC has axed the bar-set sitcom Mixology which might be surprising to you... if you haven't watched the show, that is. (Then again, if you had made that poor choice in judgement, perhaps ABC wouldn't be canceling it.) Since there's a great chance that you didn't check out Mixology this year (our readers are a smart bunch) here's the overall premise: Ten unlucky-in-love bar patrons (and some employees) do a bunch of crazy stuff in the name of finding love. And by "love," we mean "someone to sleep with after last call." Because despite the intro telling us that these people are searching for the real deal, the show also treats us to characters like Bruce, who likes to spew out lines like, "the higher the heel, the looser she feels."

This is the world we live in, people. This is romance. Get excited.

So, bye, bye, Mixology. It's time to close out.

More like this
What’s New On Netflix: A Victoria Justice Rom-Com & The Return Of David Letterman
By Arya Roshanian
What’s New On Netflix: The Return Of 'Bling Empire' & A Rebel Wilson Comedy
By Arya Roshanian
Kanye Walked Out Of Kim's 'SNL' Monologue Because Of These 2 Words
By Jake Viswanath
20 Photos From The 'Stranger Things' Season 4 Premiere To Make You Feel Old
By Alyssa Lapid
Get Even More From Bustle — Sign Up For The Newsletter