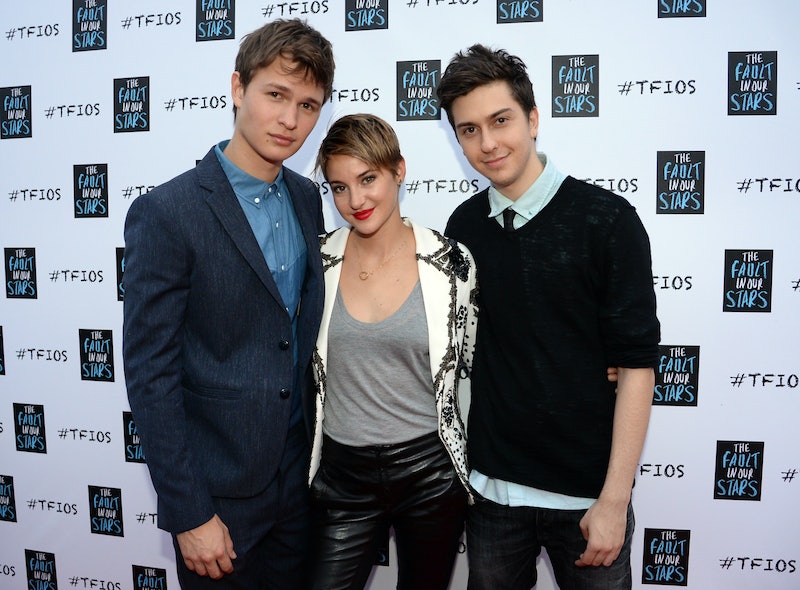 The latest heartthrob to come out of teen literature-turned-films today, is undoubtably newcomer Ansel Elgort. The 20-year-old actor recently starred in Veronica Ross's Divergent, and now he's set to appear in John Green's adaptation of The Fault in Our Stars , co-starring his Divergent costar Shailene Woodley. But while the newcomer appears to be a natural on camera as amputee Gus, the actor wasn't always confident he could pull it off. Warning: small spoilers below.

Bustle attended an advanced screening of the film presented by BuzzFeed, where Elgort, along with Woodley, director Josh Boone, author John Green and producer Wyck Godfrey spoke after the film.

"To be honest, they said the audition went really well," said Elgort of his read with would-be Shailene Woodley. "But I wasn't really confident yet because I read the script, and I read the book, and I couldn't picture myself as this guy, and it wasn't until like on set I was like 'OK, I think I'm this guy now.'"

But playing a male lead with a disability came as a difficulty, for obvious reasons. Learning to walk with one "real" leg and one prosthetic leg had to be challenging, as well as getting in the mind-set of someone who lost a limb. Elgort spoke to this challenge:

"One of the tough parts of Augustus was his extreme confidence and pizzaz, but you didn't want to make him annoying. You want him to be likable, but he still has to be over the top and theatrical, and very confident. There was this kid I ended up spending a lot of time with, mostly because I just really liked him a lot, he was really cool, and he actually didn't have cancer but he lost his leg in a hunting accident, and he's 17. But that kid had so much confidence it was dripping off of him. I have a feeling he became more confident after losing his leg and overcoming that. He wore shorts all the time and he loved his prosthetic leg. His confidence was very endearing because it was super real and it wasn't obnoxious."

Elgort translated his experience with the amputee to his performance on screen, adapting a similar sort of confidence to his character of Augustus Waters.

"Spending time with him was super helpful, because I was like that's the kind of confidence Gus has. Gus is proud to have a prosthetic leg, on the outside, but then obviously he has insecurities about it later. Which is another thing that's great and real about the character, he's not perfect.

When Hazel and Gus are intimate for the first time, Gus grapples with the fact that he isn't a complete human being, physically, and his confidence is shaken by the fact that Hazel will see him naked. Elgort explains:

"When the love scene comes around he doesn't like rip off his shirt and he's the perfect guy. He's not confident because he doesn't have a leg."

Recently, Elgort played Shailene Woodley's brother in Divergent. A funny coincidence that Elgort is well-aware of. "By the way, make sure, if any of you guys ever interview me to ask that question: What's it like playing brother and sister?" He said to the small crowd. Ironically, I did interview Ansel in person and I did ask him that question, here's what he had to say about it:

“We were very comfortable with one another going into Fault in Our Stars. Immediately we are totally comfortable which is nice, because sometimes you do love scenes with people and you have to kiss them and you have to be romantic and it could be very awkward. But because we are such good friends at this point, we totally understand one another. She’s one of the best actors right now around, the fact that they put me with her twice is a huge compliment to me. It’s given me confidence and made me feel great. Hopefully people love that movie too.”

The Fault in Our Stars comes out June 6, and trust me, you don't want to miss it.