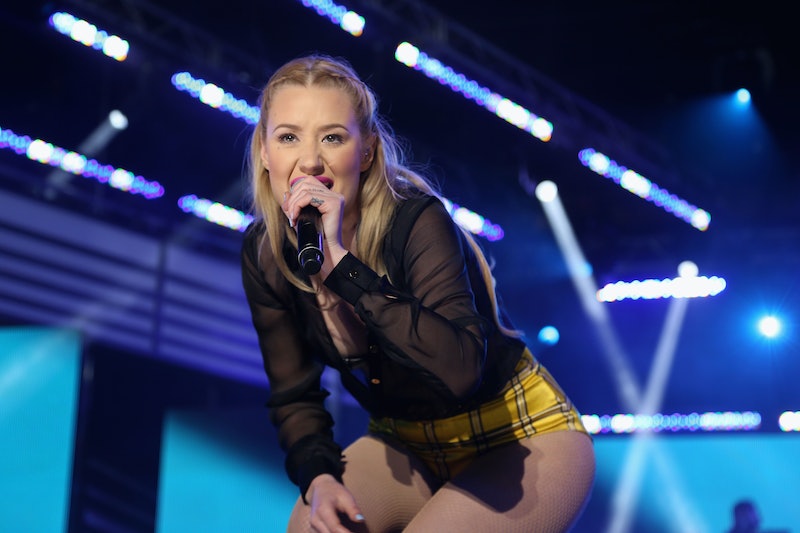 She may seem new to the rap game, but Iggy Azalea has been a star in the making for years. She started dropping music in 2011, and now she's featured on not one but two singles heating up the charts: Iggy Azalea's own "Fancy" featuring Charli XCX and Ariana Grande's "Problem," which features a guest appearance from the it girl. What's there for a budding rap star to do? Why, wow the late-night crowd as the musical guest on Thursday night's Jimmy Kimmel Live, of course.

Along with her upcoming late-night appearance, it suddenly seems like Iggy Azalea is just everywhere these days, and it's for good reason. The Australian-born rapper has livened up the hip-hop scene with her sick rhymes that are just begging for you to sing along and her general air of fabulousness. Her Kesha-like delivery and mixture of rap and dance beats pretty much makes it impossible to sit still while listening to her music. Just try. We dare you.

In interviews, she seems sweet and approachable, but she comes at us with so much ferocity and self-confidence in her music that it makes you envy her strength. She's worked hard for her dreams and doesn't ask for our permission, seemingly doing everything without the fear of judgment. Plus, she's a girl who's not afraid to show off her curves (rightfully so); Iggy even spoke out on society's messed-up body image issues on Twitter after she got all sorts of hate about photos of her without makeup on. Finally, a Twitter rant we can get behind.

Basically, it's Iggy Azalea's world, and we're all just living in it. So, you best catch up on her essential tracks below. Or, if you're already well-acquainted, keep playing them on repeat like us. It's what Azalea would want you to do.

The Song of the Summer Contender: "Fancy" Featuring Charli XCX

This song alone, featuring another fave of ours, Charli XCX, is killer. It's girly, it's fun, it has lines that will randomly pop in your head and make you feel the urge to say them out loud ("Who dat, who dat"). But then Azalea goes and does her own version of Clueless for the video, appropriately portraying the protagonist Cher Horowitz. And the final minute of the video where Azalea's walk down the hallway is so fierce, it's like a runway? That's it. Everybody go home. We're done.

The One That Won't Go Away: "Change Your Life" Featuring T.I.

The One That's Essential Azalea: "Work"

This lead single off of her latest album The New Classic has the best of Azalea: short, snappy rhymes and a chorus with loads of sass. But it's also a more personal song for Azalea, revealing some of the struggles she had to go through to become the successful rapper she is today. It's an all-around great song to dance to but really listen to as well.

Ariana Grande's jazz-tinged "Problem" is one ball of bubblegum pop goodness. Azalea adds that little edge to it to really convince us that whoever Grande is singing about is no longer her problem. Preach.

This song is from 2012 when Azalea was just starting her rise to fame. The video is another great parody, this time of the TLC reality show about kiddie beauty pageants, Toddlers & Tiaras. No matter what your opinion on that is, we can all agree that everything looks cooler with Azalea's music playing in the background.

This is kind of perfect. For some reason, these two just seemed like they were destined to work with each other, and we're so glad it actually happened. The song catches us in a web of Azalea's taunting rhymes and Ora's gentle vocals, and we don't want to be let go.