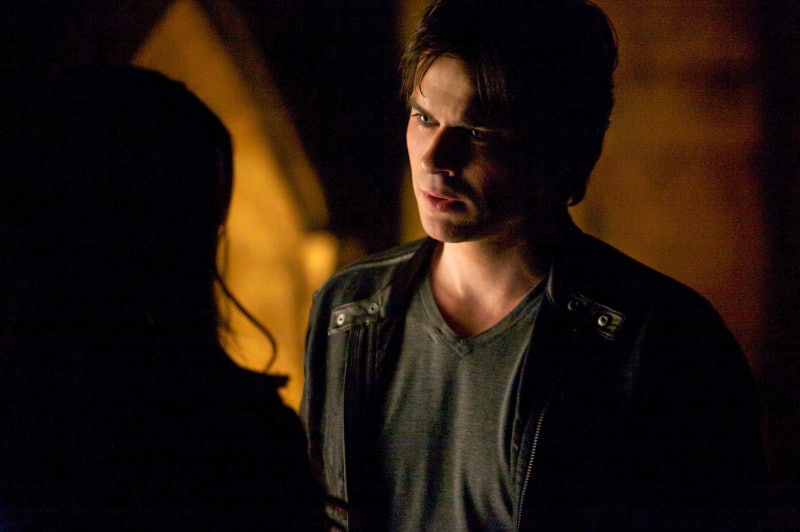 All this talk of lives ending is really putting a cramp in the romance component on the CW's biggest drama. The Vampire Diaries ' Season 5 may find Damon dead and that's really going to mess up any plans Delena fans had for celebration after last week's mini-moment (you know, the part where Elena thought she might die without ever seeing Damon again?). But if Damon dies, Elena might be facing that situation all over again.

And if spoilers are any indication, it's all but confirmed that Damon's life will at least die down to a flicker by the end of the Season 5 finale — what a great cliffhanger, right? To start, Damon dies in the books, so there's a great possibility the series will take that tidbit and put a perfectly Julie Plec spin on it. Second, Ian Somerhalder straight up said that Damon would die and that it would be "dope." So that kind of seals the deal.

What's more is that executive producer Caroline Dries told E! that the end of the episode is "up there" with the series other incredible moments — wouldn't Damon sacrificing himself to bring Stefan back qualify? (Hell yes, it would.)

The question is, with Damon and Elena dangling around in We're-terrible-for-each-other-but-we're-so-in-love Land, could Damon's death ruin everything for Delena fans? Clues are pointing to a major upset.

Paul Wesley told TVGuide that the finale changes everything in Season 6 in a big way:

[The finale] definitely establishes new parameters in the environment we'll be shooting in Season 6 ... They reset things in a way, and the writers have the ability to now change the circumstances and locations of where the show takes place.

This certainly sounds like another dimension and with another dimension comes some separation anxiety. If Damon is the one who dies (and it looks that way), then it's not out of the question that he finds himself in another dimension away from Elena. And with all the buzz about Caroline maybe pining after Stefan in Season 6, Delena could be ruptured and Elena could find herself very, very alone. No matter what happens, it's actually going to be permanent this time, if Nina Dobrev is to be believed. In an interview with TVLine, Dobrev says, "We’re going to reset everything and make it so that once you die, you’re dead." Get ready for some permanent sadness, everyone.

Of course, The Vampire Diaries is known for its twists. No one expected Stefan's heart to be ripped from his body last week, even if we did think he was headed for a typical TVD impermanent "death." And we certainly didn't expect last season's big finale, with Katherine taking the cure and Stefan dropping to the bottom of a river in an iron box. Anything could happen on Thursday's finale and even if we got the Damon death thing right, lord knows Plec & Co. have some other unfathomable twist up their sleeves. Summer is going to be tough, y'all.