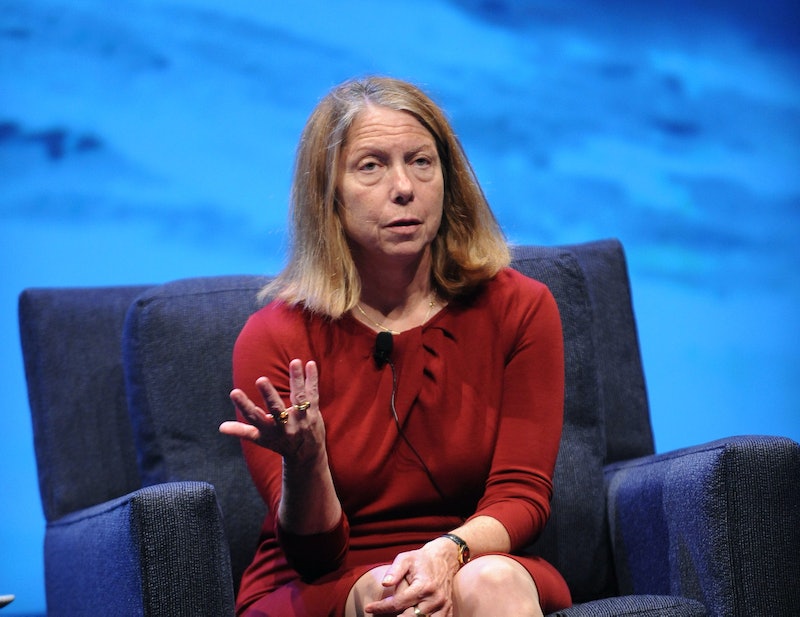 Jill Abramson's firing at the New York Times drives home a fact that's not at all new: today's workplace is still a really, really hard place for women to succeed. Abramson's ascension to the top of the Times' masthead was a historic victory for women in journalism — a profession still hugely plagued by gender inequities — but her unceremonious ousting is downright terrifying to many of us. If Abramson couldn't make it, what hope do the rest of us have?

In recent years, women have been inundated more and more with career advice from strong, successful women. Sheryl Sandberg told us to Lean In so hard that it started a countermovement, which in turn told us that we should probably be leaning out, instead. Over at the Atlantic, Claire Shipman and Katty Kay told us to be more confident, to speak up about our strengths, and not to be afraid to take charge.

These pieces of advice are great; that they come from women who have been there and done it is even better. But as Abramson's firing shows, they're not nearly enough. We need more than think-pieces and advice columns if we're going to close the gender-pay gap and see more women in positions of power. (And yes, I realize this is a think piece.)

In late March, the New York Times published something interesting: a guide meant to instruct women how to move past gender biases and ask for a raise. Workplace discrimination "can emerge when women act in ways that aren’t considered sufficiently feminine, and when women advocate for themselves," the guide said ... if they don't take a more demure, universally likable approach, the guide warns that they "risk being perceived as overly demanding and unlikable."

Abramson did all of the things books and think pieces have told us to do. She was confident: she once reportedly called managing editor (now her replacement) Dean Baquet into her office to demand more interesting news coverage. Baquet is said to have responded by punching a wall in front of the entire newsroom, and yet Abramson is the one called "bitchy" or "pushy." Baquet, by turn, was lauded as "a rare combination in journalism" of "a tough reporter and also a nice person" in TIME. If that seems like a serious double-standard, that's because it is a serious double-standard.

Abramson also reportedly took some standard advice for women looking to confront pay inequity: ask for a raise. As Ken Auletta reported in the New Yorker (and NPR media reporter David Folkenflik independently confirmed) Abramson, weeks before her firing, found out that she was making considerably less money than her male predecessor, Bill Keller. When she confronted her superiors about it, Auletta explains, management reportedly felt that she was being "pushy."

The New Yorker's description of events raises a scary question: what if we do everything we've been told — asking for raises when we deserve them (the New York Times was operating at a profit during Abramson's tenure and racked in three Pulitzer's last year) — and it still isn't enough?

The way that we talk about women in the workforce is broken — not so much because of the language we use, but because of this predictable media cycle that creates a "dialogue" with few lasting results.

Seeing women as confident, successful breadwinners is a relatively new social phenomenon, but that's absolutely no excuse. When we live in a world that fires Jill Abramson but celebrates Steve Jobs for being a jerk, we have a deep, societal problem — and if we don't do anything about it, we're going to see troves of young, smart women continue to languish in lower ranks, depriving us of the leadership and change they could drive.

We talk about gender pay inequality in a few ways — mostly either by arguing over the statistics or by telling women how they can fix it. The statistic that women make 77 cents to a man's dollar isn't right, but every time we get caught up in debating a number, we miss the larger point: women are still paid less than men, and tend to pursue less remunerative careers than men, too. Every time we tell young women to lean in and grab a raise right off their bosses' desks, we're also ignoring something crucial — our underlying societal biases against strong women.

Studies have shown, time and again, our impatience with women who ask for more money. A 2009 study found "that women can encounter both social and financial backlash when they behave assertively, for example, by asking for resources at the bargaining table," and that the backlash becomes worse when women are expected to behave in communal and nurturing ways. Another study, published in 2005, found that male superiors penalized women for asking for raises — but didn't penalize men at all (women bosses penalized both).

In late March, the New York Times published something interesting: a guide meant to instruct women how to move past gender biases and ask for a raise. Workplace discrimination "can emerge when women act in ways that aren’t considered sufficiently feminine, and when women advocate for themselves," the guide said, so women should "take a more calibrated approach, whether in asking for a higher salary or a new position." If they don't take a more demure, universally likable tone, the guide warns that they "risk being perceived as overly demanding and unlikable."

Talking about gender pay gaps and the need for women to lean in and be confident is all well and good — but it's too easy. It's simple to place the blame on women, to tell them that they're not doing enough to further their careers. It's also easy to tell women they're being too pushy, that it's their responsibility to strike the perfect balance of strong and caring, feminine and powerful.

Taking the easy route isn't going to change anything. We can lean in and out and close the confidence gap until we look like we're doing some ceremonial dance to the workplace equality gods, but unless people in positions of power — reporters and bosses and publishers and politicians — realize that the problem isn't women, but the entire broken system, that dance isn't going to make a difference.

It's time to stop telling women what to do at work. Instead, let's strap on our (metaphorical) boxing gloves and start directing some advice at the people in charge. After all, it's their system that's broken. Instead of training young women on how to better ask for raises, we should be training managers on how to check their gender biases in such negotiations.

Until we can change the way managers think, we need to have HR staff present at salary negotiations to ensure that women are getting an equal shot at receiving raises. And if the person in charge can't adjust their view to accept the fact that a woman can be confident without being bossy, it's the manager who should be unceremoniously ushered out — not the woman simply asking to be treated as an equal.

More like this
10 Organizations To Support On Latinx Women's Equal Pay Day
By Caroline Burke and Mia Mercado
Dyson Is Dropping Futuristic, Air-Purifying Headphones
By Rachel Lapidos
MOBO Awards Found Kanya King On The Woman Whose Grit & Determination Spur Her On
By Kanya King
Here’s Your Daily Horoscope For December 8, 2022
By Mecca Woods
Get Even More From Bustle — Sign Up For The Newsletter